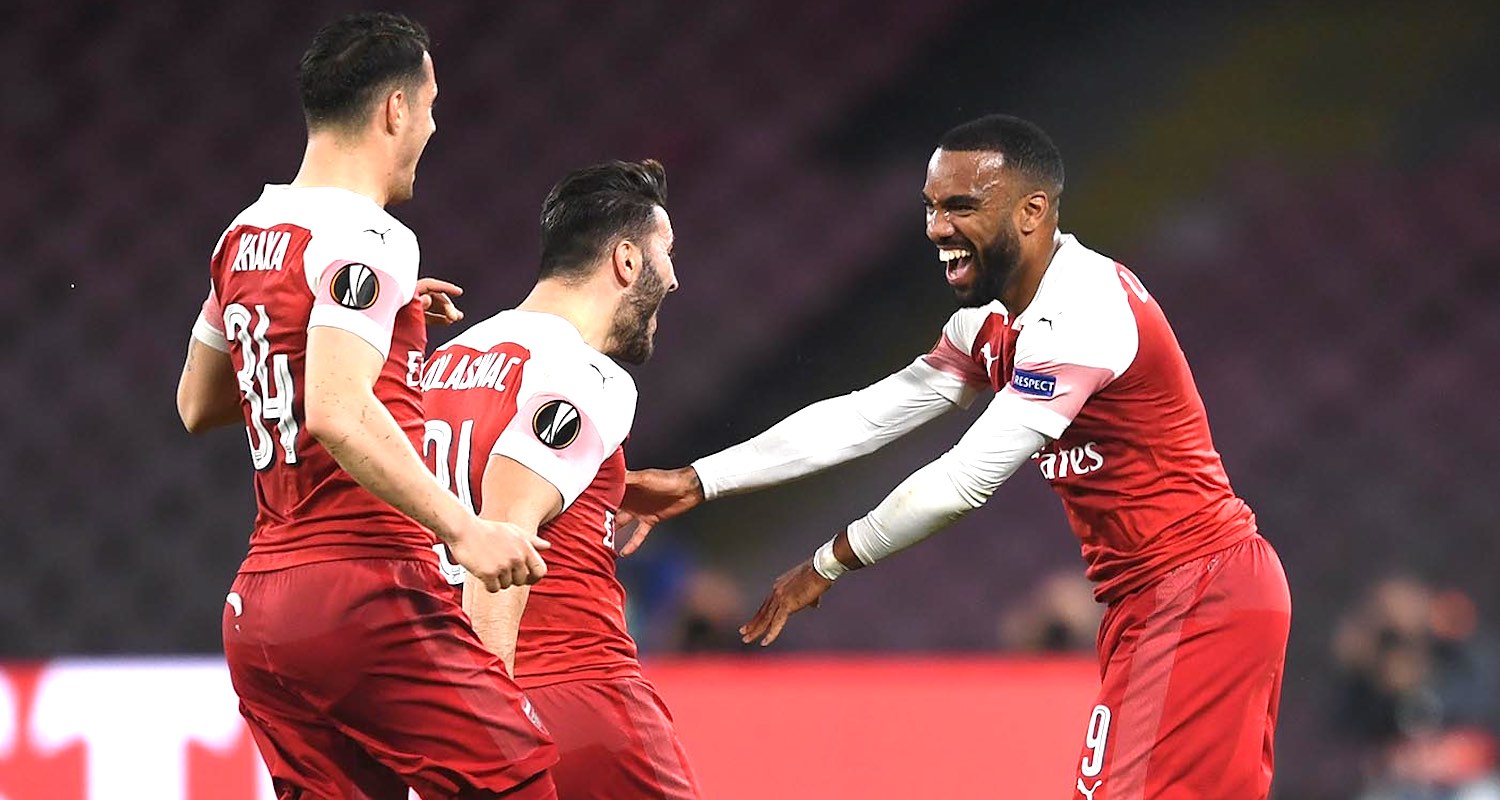 We knew that scoring one goal last night would leave Napoli needing four, and when it came the impact it had on the Italian team, and the game itself, was profound. Already nervous and inhibited because of the scoreline from the first leg, they knew the game was up. They huffed and puffed but deep down they understood that this Arsenal house could not be blown down. Their heads went. Insigne was booked for booting the ball away, and when Laurent Koscielny quite deliberately interrupted their momentum late in the first half to tie his laces, their hysterical reaction told you they knew the jig was up.

The goal came from Alexandre Lacazette, a free kick from the kind of distance that makes you wonder how far over Granit Xhaka was going to whack it, but the Frenchman curled a lovely shot into the back of the net – although he did have a bit of help from Alex Meret. He took a step the wrong way, Lacazette’s curling effort flew into the side of the goal he should have had covered, but let’s give our man more props than point fingers at the young goalkeeper.

Afterwards, the striker said he’d been practising his free kicks, and without an obvious specialist in the team it’s good that he’s added another little string to his bow. On a big stage and in a big game, he delivered the goal that basically ensured we were going through to the semi-final, and I don’t think we can ignore the timing of it either. It’s not just that it came relatively late in the first half, but also that we scored just a couple of minutes after losing Aaron Ramsey to a hamstring injury. The Welshman has been in fine form of late, so to see him go off in a game of this importance could have put us on the back foot a bit. However, Lacazette’s strike came just two minutes after Henrikh Mkhitaryan replaced him, so any potential wobble we might have had had no time to manifest itself.

Before then, we’d started brightly, but Napoli had some moments of danger. A good break from deep in their own half left Cech needing to save with his feet from Callejon, and Milik headed hilariously wide from a decent position, but in general we coped well with what they did. Insigne ran offside a lot – like a gnat sized Adebayor – and once the Arsenal goal went in they lost composure, shooting high and wide, clumping crosses out for goal kicks and generally their heads went down.

They had a lot of the ball in the second half, but could do little with it. The back three stood firm – Laurent Koscielny made more clearances (8) than successful passes (7) – but it was never going to be the kind of night when our central defenders passed the ball around at the back. Emery took off Granit Xhaka knowing a yellow card would rule him out of the first leg of the semi-final, Elneny replaced him and Napoli continued to play like a team wearing wellies. Iwobi came on for Lacazette, most of the game was being played in our half, but there was no real conviction from the home side.

Corners and set-pieces were dealt with, Cech didn’t have a lot to do but saved well when a dangerous ball rebounded off Monreal, and overall we looked pretty comfortable. For me, that’s the takeaway from both legs. I was expecting a lot more from Napoli, and while I suspect they might not have have played as well as they can across the two fixtures, I think we deserve some of the credit for that. We pulled them apart in the first half in London then controlled the game in the second period, and once we scored last night we had the game, and them, by the short and curlies and they didn’t like it one bit. Insigne sulking on the sidelines was funny, and the shots of Carlo Ancelotti sitting on the Napoli bench showed you a vastly experienced manager who knew what was going on.

If there has been criticism at times for Unai Emery this season and his team selections, I think he deserves credit for last night. It would have been understandable to be cautious with a two goal lead, but he played his two strikers, two overlapping wing-backs and Ramsey, so props to him for that. Maybe it wasn’t a vintage performance, but a 1-0 away from home against a team second in Serie A is a fantastic result, and there was just a touch of the George Graham era in how we did it.

The manager had words of praise for his players afterwards, saying:

I am very proud of my players and proud of our work. We showed the players can play against good players and show a big personality with our ideas.

Mention it quietly, because the Everton game is still a bit fresh in the memory, but since the 10 man defeat to Rennes in the previous round, we’ve played seven, won six and conceded just a single goal – that one at Goodison Park that was so damaging. That’s six clean sheets, including two games against the second best team in Italy, as well as Man Utd. It’s not to suggest all our defensive issues have been solved, but for a team which has been weak in this area all season it’s impressive and the manager/players deserve credit for it.

The one downside to last night was the injury to Ramsey. If it’s just a regular hamstring strain, you’re looking at three weeks, so it’s possible he could be back before the end of the season, but it’s going to be touch and go – and that’s assuming it’s nothing more serious than just a basic strain. It was too soon for Emery to know one way or the other. This is what happens though – players get injured, and at the business end of the campaign you need others to step up and fill the gap. Without getting ahead of anything, the Europa League final is the end of May, so that could very well be his Arsenal swansong.

However, there’s the small matter of two legs against Valencia first where we’ll face ex-Gunners Francis Coquelin and Gabriel, but matters now turn to domestic action – with Crystal Palace on Sunday, followed by away trips to Wolves and Leicester. Emery is going to have carefully manage his squad, I expect plenty of changes for Sunday’s game in particular, but we can cover that more on the blog over the coming days.

For now, let’s enjoy the fact we’ve got a semi-final to look forward to, and I genuinely think the way we handled Napoli over those two legs can provide this team with a real confidence boost as we look to secure a top four position, and reach the final in Baku. There was trepidation when we drew them, but look how comfortably we dealt with them in the two games. It augurs well for what’s to come, but the challenge now for Emery is to ensure his team stays focused, and not distracted by Europe at the expense of what we still have to do in the Premier League.

I will have an Arsecast for you later this morning. I spoke last night with Andrew Allen about the game and lots more. There’s a bit of editing and what you to sort out, and I’ll get that up as soon as I can.