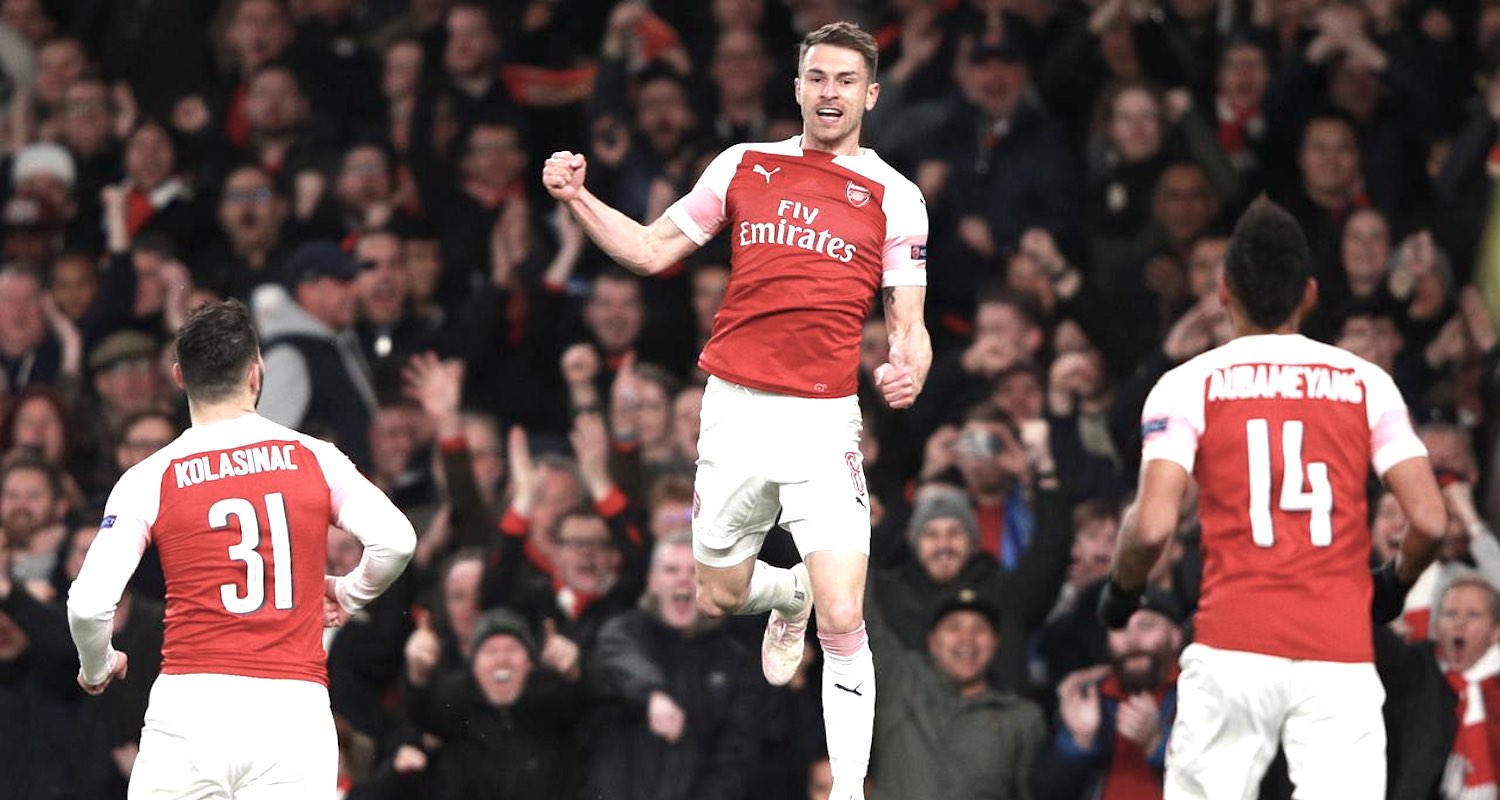 We do like it at home, eh? A 2-0 win over Napoli puts us in a very good position going into next week’s second leg, and while the margin of victory might have been greater if we’d taken a couple more chances, it’s worth remembering that they had two glorious chances to score an away goal but fluffed their lines. What might have been works both ways.

Which isn’t to complain or anything, there was a lot to like about what Arsenal did last night and how we did it. Pierre-Emerick Aubameyang returned to the starting line up, but crucially so too did Laurent Koscielny and Lucas Torreira, both of whom make us a better team. The captain adds defensive cohesion, as well as experience and reading of the game, and we simply look more solid back there when he plays.

In midfield, Torreira’s snapped into tackles, shuffled off a bit, snapped into another tackled, shuffled off again with his run that reminds me a bit of Robert Pires, and he showed qualities our midfield has missed recently. The three game suspension, combined with an Interlull, has basically given him a month off to freshen those legs, and he played a key part in how we approached the game.

Immediately you could see we were different from Goodison Park on Sunday. There was more intensity and confidence about the way we played, we pressed high up the pitch, we won the ball back from them quickly and drove towards their final third, and it caused them problems. Ramsey and Maitland-Niles forced blocks inside the opening ten minutes, and shortly after that the two combined to put us ahead.

It was a lovely move which began inside our half with Maitland-Niles, he played it to Ozil who took the ball back off Ramsey, fed Lacazette down the right, he found Maitland-Niles whose run had taken him into the box. His control was good, he laid it off to Ramsey who had timed his run to perfection and he swept the ball home to make it 1-0. The Welshman really is doing his best to ensure this season ends with a flourish, he wants to go out with another cup final winner (scoring three means he gets to keep the club).

Ten minutes later the lead was doubled. Twice Torreira won the ball, the second time it was higher up the pitch than usual so he took it on, found himself just outside the box so decided to have a go. The cold-hearted, grey-suited, office-bonces at UEFA have decreed it to be a Koulibaly own goal as it might have been going wide before it deflected past the keeper, but we all know it was a Torreira goal, made by Torreira, scored by Torreira and no less than he deserved for the way he played last night.

Napoli didn’t really cause us any problems until late in the first half, and could well have pulled one back when Insigne had a clear sight of goal from inside our box but he leathered his shot over the bar. The Italians obviously got a bit of a rocket at half-time, and were much more involved in the second half but for the most part it was a series of offsides, and when they did get in behind – with Monreal exposed a bit too often – we defended well, usually through Koscielny.

Emery made changes, bringing on Alex Iwobi and Henrikh Mkhitaryan for Ozil and Lacazette, and both were bright. The Armenian in particular had an impact, creating two very good chances. One for Aubameyang that the striker fired into the side netting, then a late one for Ramsey which he somehow lifted over when it looked easier to score, but when you consider that Napoli had themselves missed an absolute sitter just before that, I don’t think we should dwell on that miss too much.

The important parts of last night were the win itself, and the fact we didn’t concede, which means that if we score one at the Stadio San Paolo then that away goal makes life even more difficult for Napoli. I’d rather go there with a 2-0 than a 3-1, so if people want to be upset about the missed chances, let the freshly-laundered clean sheet comfort you with its chemical lavender fragrance.

Afterwards, Unai Emery said he was “50%” happy, as the job is only half done, and went on to say:

I think the result is fair. They also created two chances but they didn’t score. Maybe we created also chances to do the third goal, but I think we can be happy with this result. Two-nil is a good result. Our challenge and success is if we are going to be competitive away.

And that’s what it boils down to: not so much a case of can we be as good as we were last night away from home, but can we make sure we’re not as bad as we were against Everton? The first half in particular was key to last night’s result. We played with purpose and cohesion from the start. Maitland-Niles looked a different player – perhaps that inconsistency is something a young player is more prone to – and contributed well down the right hand side. Ozil showed some glorious flourishes and really appeared to be enjoying himself, and while neither striker scored they led the line and helped the team press high up the pitch to make life uncomfortable for Napoli.

Torreira’s return to the team, and something like the form he showed earlier in the season was important. Hopefully the fact he got treatment late on and was withdrawn was just precautionary and nothing too serious because he brings things to midfield that no other player can. And what we can say about Ramsey? I’m gutted he’s leaving because he’s always been one of my favourite players, but Emery says he wants to enjoy these final few weeks of him, and that’s about all we can do.

The Welshman is popping up with big goals for us at big moments, and between now and the end of the season you wouldn’t bet against him contributing even more. We’ll miss him when he’s gone, but until then let’s try and get the very best out of him. When we’re heading for ‘every game is a cup final now’ territory, having a player who knows how to do the business in those games could prove very useful indeed.

So, all in all a really positive night, and just what we needed after the Everton game. We can discuss/question whether it’s something we can repeat next week in Naples – or even on Monday night when we face Watford – over the next few days on the blog, but for now let’s just be pleased with what was a very good night’s work.

Podcast chums, James and I are recording an Arsecast Extra this morning. As always, if you have questions or topics for discussion, send to @gunnerblog and @arseblog on Twitter with the hashtag #arsecastextra – or if you’re on Arseblog Member on Patreon, leave your question in the #arsecast-extra-questions channel on our Discord server.

That should be available on site and in your favourite podcast app by mid-morning, and we’ll have more reaction over on Arseblog News throughout the morning.