Home Arseblog, the arsenal blog Sp*rs 1-1 Arsenal: If only … 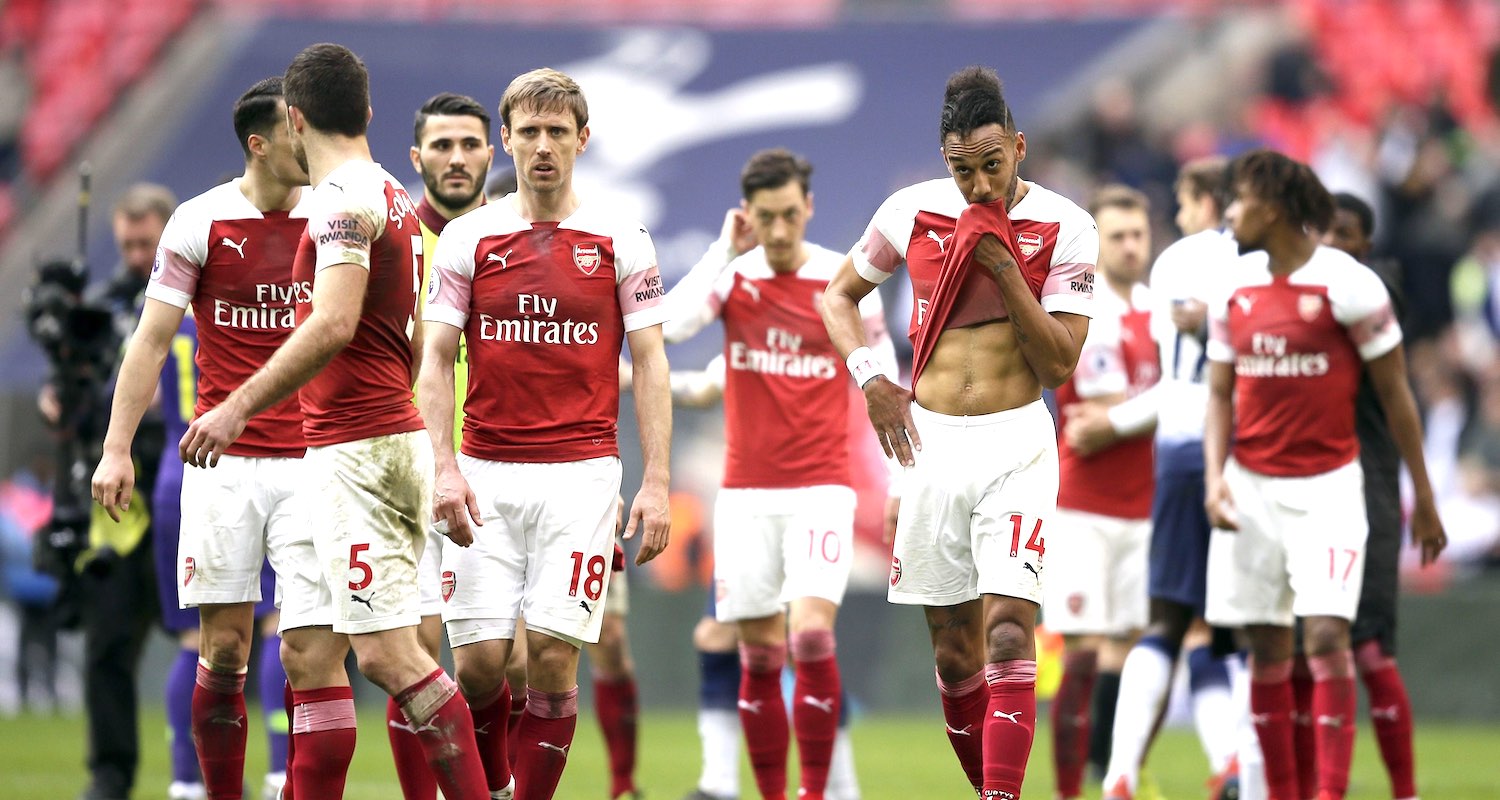 I have a great sense of if only this morning. If only Aubameyang had taken a better penalty. If only Lacazette had been more clinical with that fairly simple chance he had in the second half. If only the linesman had noticed that five Sp*rs players were offside when the free kick that led to the penalty was taken. If only Mustafi hadn’t been a king-sized eejit and not barged Kane for no reason right in front of the referee.

That was a game Arsenal could and should have won, and given our away day travails when we face the big teams – and Sp*rs – I suppose that’s something to be encouraged about in general, but when the final few minutes play out the way they do it’s hard not be deflated. A classic case of a draw that feels like a defeat.

Unai Emery’s team selection is something I’ll discuss at greater length on the Arsecast Extra (recording this evening with James, btw), but he went with a back four, brought Aaron Ramsey into the side and somewhat surprisingly started Matteo Guendouzi over Lucas Torreira in midfield. Mustafi at right back was a bit odd, but I could see some logic to it in the absence of Lichtsteiner and the fact that Maitland-Niles hasn’t always been convincing when playing there. It was a selection dictated by availability as much as anything else.

Sp*rs started as they meant to go on, diving all over the place and Danny Rose should have had a booking early on for an Olympic attempt to win a free kick. Anthony Taylor let a lot go, including a foul on Kane by Xhaka which was definitely a yellow, but he reverted to type in the end with some odd decisions.

The early Arsenal goal was beautifully taken by Aaron Ramsey after we’d denied Kane a sight of goal. Davinson Sanchez misjudged the flight of the ball on halfway, Lacazette played Ramsey through and he went round Lloris, held off pressure from Wanyama and rolled the ball home. His celebration in his last ever North London derby showed how much it meant to him. It’s a shame it didn’t come in a game we won.

They had a goal rightly disallowed for offside, and generally we defended really well. Kane spent the first half backing and barging into Koscielny without any free kicks being given our way but he got little change from the skipper, and even less when he decided to try his luck with Sokratis in the second half. Both centre-halves were excellent, although a moment of ball-watching from the Greek international late in the first half allowed Eriksen a chance with Leno saved well. His follow up stop from the rebound was remarkable – going the other way he stuck out his left hand to prevent a goal-bound shot going in, and that’s the kind of stuff that can cement a player at a club. Brilliant goalkeeping.

We made a half-time change bringing on Torreira for Guendouzi, and early in the second half a great Monreal cutback presented Lacazette with as clear a chance as you’d like in a game like this. Somehow he skewed the ball wide when it looked easier to score, and almost immediately his race was run and he was replaced by Aubameyang. The French international looked distraught on the bench as he undoubtedly replayed that moment again and again in his mind. You hoped it wouldn’t come back to bite us in the arse but, of course, it did.

Danny Rose eventually got booked for a studs up challenge into the chest of Leno, but when you consider what came later with Torreira he was very lucky to escape a red. I think the red for the Uruguayan was harsh, he was clearly playing the ball, got the ball first, and his momentum took him into Rose. In fact, I’d say Rose ran into his studs more than Torreira fouled the opponent, but Taylor thought it was a red card and we have to live with it.

What confuses me is how, if Torreira is considered a red card, Rose’s challenge on Leno isn’t. He didn’t even get the ball, he went studs first into the chest of the goalkeeper, leaving holes in his shirt, and that’s a yellow? He should have been off, no question, and the referee bottled that. Afterwards, Unai Emery’s comments about the officiating were measured, but his insistence that ‘VAR is coming to help them’ made it clear what he really thought.

The same officials who missed that obvious sending off also missed the obvious multiple offsides when a free kick was taken but there was still absolutely no need for Mustafi to do what he did. It was brainless, the latest in his catalogue of moments that need to be put in a dustbin and set on fire, and it presented a team who had struggled to make any real chances in the second half with a chance to get level. Whatever else you want to say about Kane, he knows how to take a penalty and he gave Leno no chance. 1-1. As for Mustafi, I know he was being played out of position, but that has no bearing on what he did. I’m convinced he’s on his way out this summer anyway, but this will surely have reinforced that decision.

Sp*rs were energised after the goal but still found our defence resolute, regardless of how many snide fouls Llorente and Kane left on our centre-halves, and as the game entered its final minute of normal time, we had a penalty of our own. It was a bit soft, but you see them given all the time. Aubameyang had the chance to win it, to be the hero in a North London derby – away from home – and his penalty was absolutely rubbish. It was weak, easy to save, and even when Iwobi put the ball back on a plate for him, he wasn’t strong enough to finish.

I know people have been going on and on about Vertonghen encroaching, but that feels like clutching at straws to me. I can see the point but it’s irrelevant if you score the penalty in the first place. Kane showed how to do it – and it pinches my very last nerve to say that – but it’s true. There was nothing emphatic about Aubameyang’s attempt, it was poorly placed, didn’t have enough power, and when you’re standing there with a chance to win the derby you make sure you take a good penalty. He didn’t and it’s still frustrating this morning to think about it, because we should be sitting here this morning just one point off them and in the top four, instead of being four points behind them and in fifth place. The margins are so tight at this point of the season we can’t afford to let chances like that slip.

We should have won that game. For all their possession and territory they created very little. Kane’s only shot on goal was the penalty as far as I can remember, and that’s a testament to how well we defended. Considering that hasn’t always been our strength this season, that’s definitely a positive, and even amid the frustration this morning and the sense of what might have been, I think we do have to take some encouragement from the overall performance.

Hopefully it can galvanise the players as we head into this run-in, particularly as we have another massive game next weekend against Man Utd who continued their winning form yesterday. The two strikers will feel like they have something to make up for, and generally the level from most of the players yesterday was really high. Emery’s decisions might have got people up in arms beforehand, but I think he was validated by what we did on the pitch for most of the game.

All the same, that inability to win on the road in the games that mean so much at the top end of the table remains a millstone around our necks, and one we’ll have to carry with us a little longer. The good thing is that we don’t have any more of the big teams – and Sp*rs – away, and if we can replicate what we did yesterday in some of the fixtures we have between now and May then we’ll stand a very good chance of picking up plenty of wins.

So, mixed emotions this morning. Frustration above all else because it’s all still a bit fresh, and dropping two points the way we did feels like a kick in the nuts. There were still things that augur well for what’s left of this season though, so let’s hope we see more of that and less of the other.

As I said, James and I will be recording the Arsecast Extra later this evening, so look out on Twitter for the call for questions. If you’re an Arseblog Member on Patreon, you can leave questions in the #arsecast-extra-questions Discord channel at any point, and we’ll put the podcast out tonight when it’s finished.

Until then, have a great Sunday.