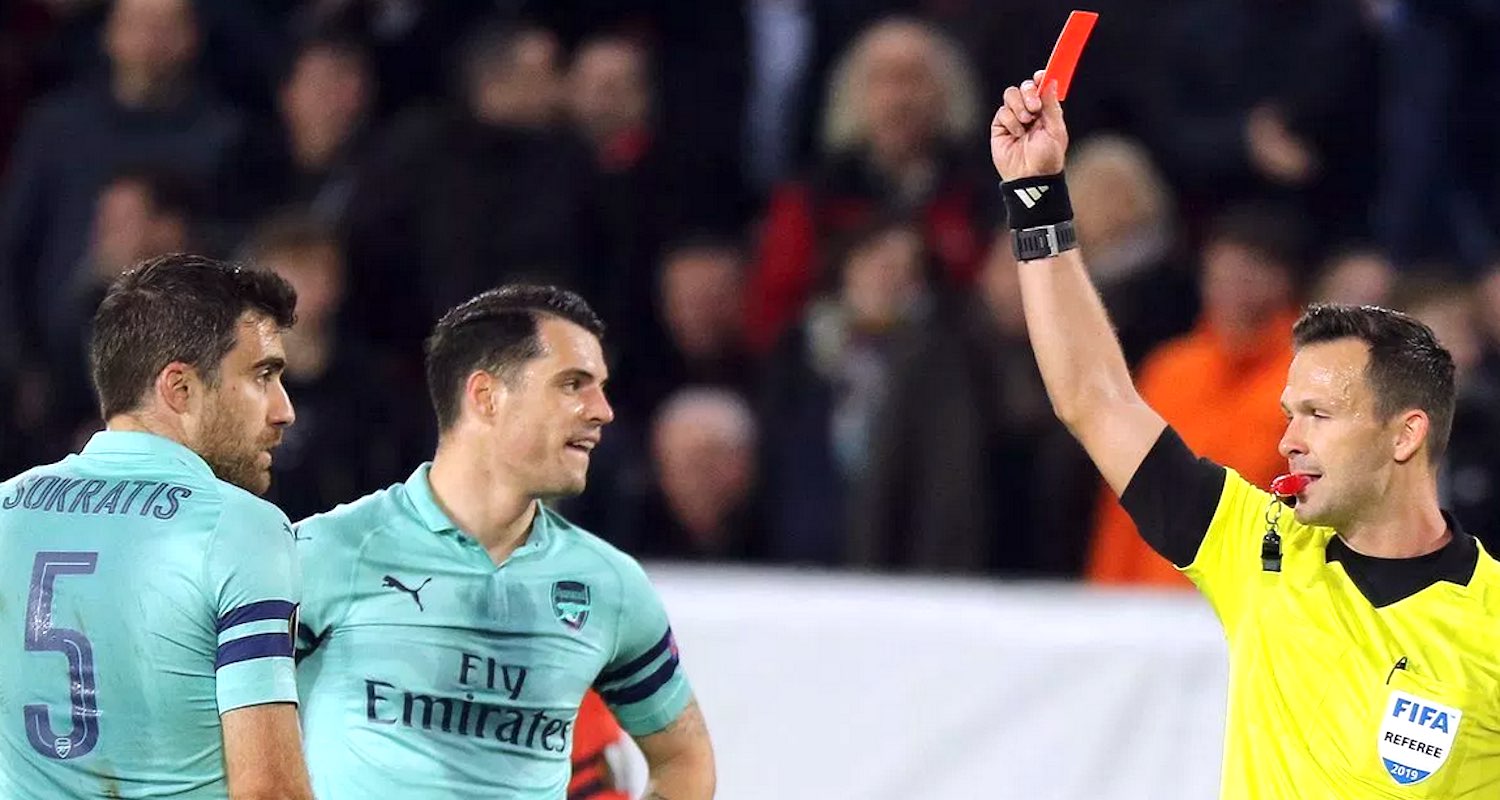 It was going fine until the sending off. We were ahead through Alex Iwobi and probably should have been 2-0 up but for a missed Lucas Torreira chance shortly after the opening goal. Rennes were busy but not overly threatening, and in general as an away game in Europe, it was pretty much ok. Not brilliant, but solid enough.

Then, less than 10 minutes after picking up his first yellow card, Sokratis was booked again. I’ve watched the replays, I think it’s a bit harsh, but I can understand why it was given. When a referee sees a defender who has a bit of a reputation for being physical, and who he’s already let off when he kneed a bloke right in the gooch, appear to commit a foul when an opponent is streaking through on goal, it’s rare that he’s going to give him the benefit of the doubt.

When you watch it again, it’s soft. I don’t think there’s much of a foul, or if there is then Sarr is just as guilty as Sokratis before he throws himself to the ground, but the referee saw it the way he saw it and we had a red card to contend with. Before we could even think about how to reorganise, we had the free kick to consider, and it felt like a real double-whammy when, after the first attempt came back off the wall, Bourigeaud hammered the rebound into the top corner as the men in the wall did their very best to make themselves as small as possible. Cech had no chance, the guys standing in front of the ball were far more culpable, but it was a cracking shot all the same.

We muddled through the rest of the half with Mkhitaryan at right-back, but I fully expected a man famous for half-time changes to sort things out at the break. Emery could have brought on Ainsley Maitland-Niles to play at right back, or Sead Kolasinac to play at left-back and moved Nacho Monreal to centre-half. Instead, he did nothing, choosing to play an attacking midfielder as a defender, and for the duration of the second period Rennes enjoyed all the time and space they wanted.

The impact of the red card is clear when you look at the stats. They had 19 attempts on goal, 15 of those came after the sending off. Now, being down to 10 men is not ideal, and unquestionably it makes the game more challenging, but how many times have you seen a team suffer a red card and become subsequently more difficult to break down? They stay organised, keep a solid shape, and work harder to deny the opposition the advantage of the extra man.

Arsenal were the opposite yesterday. We became much easier to play against and nothing Emery did changed that. He spoke afterwards about having to learn to play better with 10 men, but so much of that has to come from the coach. We looked like a team that had no idea how to deal with a 10 v 11 situation. Iwobi was hooked early in the second half for Matteo Guendouzi, we kept Mkhitaryan at the back and in fairness he did his best but I think it was a poor decision.

Someone further forward should have been sacrificed for a defender, we settle into a 4-4-1, keep our shape as much as possible, and don’t invite the kind of pressure we did. The obvious candidate for half-time withdrawal was Mesut Ozil who I thought played well generally, but away from home with a man down is not exactly the ideal scenario for him. I do wonder if the recently mended fences between him and Emery had an impact on the manager’s decision making there. Like he didn’t want to stoke the fires or something.

Guendouzi offered no extra protection, and his reactions were slow for the second goal. When the ball broke, he sauntered over eventually, stuck his hands behind his back and then basically got out of the way of the cross which deflected off Nacho Monreal and over Petr Cech to make it 2-1. He was way too casual, and it was a goal we could have avoided. All the same, 2-1 is a manageable scoreline in the circumstances, so it was important we held onto that.

Our goalkeeper did his best on his return to his former club with a string of saves as Rennes continue to threaten. Aaron Ramsey and Kolasinac came on for Ozil and the utterly ineffective Aubameyang, and as the game inched towards the 90 minute mark, we shot ourselves in the foot. We had a throw in up field, 6 Arsenal men were in their half, Kolasinac and Torreira were in their box, so when Monreal gave the ball away then threw a tantrum rather than react, we were badly caught out in terms of numbers.

Rennes broke, switched the play and scored a genuinely excellent counter-attacking goal. The first-time cross was fantastic, the header emphatic, but from an Arsenal point of view it left a lot to be desired. At that point in the game to commit so many men forward was foolhardy. We didn’t need to score as much as we needed to ensure that they didn’t score again, but if you are going to go up, you better make damn sure you get back.

Ramsey’s lung-bursting effort to make up ground and to defend showed up some of his teammates, in particular Guendouzi who was well aware of the danger of Sarr outside him but thought it was acceptable to jog back and hope for the best. People have been impressed by his effort and energy this season, but he was found wanting there, and someone needs to have a word with him about that – and his propensity to lose the ball when being challenged from behind. There’s potential there, no doubt about it, but he’s a long way from the finished article as this game showed. He’s done well, but he’s got no business sauntering through a game like that at his point in his career.

That third goal was a real blow. I know 2-0 at home is hardly an impossible result to achieve, but it definitely complicates things. Remember, we have to do it without Alexandre Lacazette whose suspension is so untimely given Aubameyang’s slump in form, as well as Sokratis who will also miss out because of his red card. It’s also far from ideal preparation for Sunday’s game against Manchester United, a team buoyed by their European involvement this week whereas ours feels rather deflating. Coming off the back of a North London derby which also took some of the wind out of our sails, Emery’s got a job to do between now and Sunday to get his players in the right frame of mind for what is a massive game.

The manager too needs to take stock, because this was far from his finest hour. A red card is not ideal, obviously, but it is something you can prepare for and practice. We didn’t look like a team who had done that, and for someone lauded for his tactical outlook and exactitude, his decisions played a big part in that game getting away from us last night. The second leg is there for us, I still we have the ability to go through, but man do we ever like to make life difficult for ourselves in new and inventive ways.

Now though, the focus has to turn to Sunday, because a bad result there would have a significant impact on our top four chances. And after a night when we’ve complicated one potential route to the Champions League next season, we can’t afford to repeat that against United on Sunday.

Finally, I’ll leave you with a brand new Arsecast, chatting to James about the game last night, and we also get a Man Utd perspective before Sunday’s game. All the links you need to listen/subscribe are below.