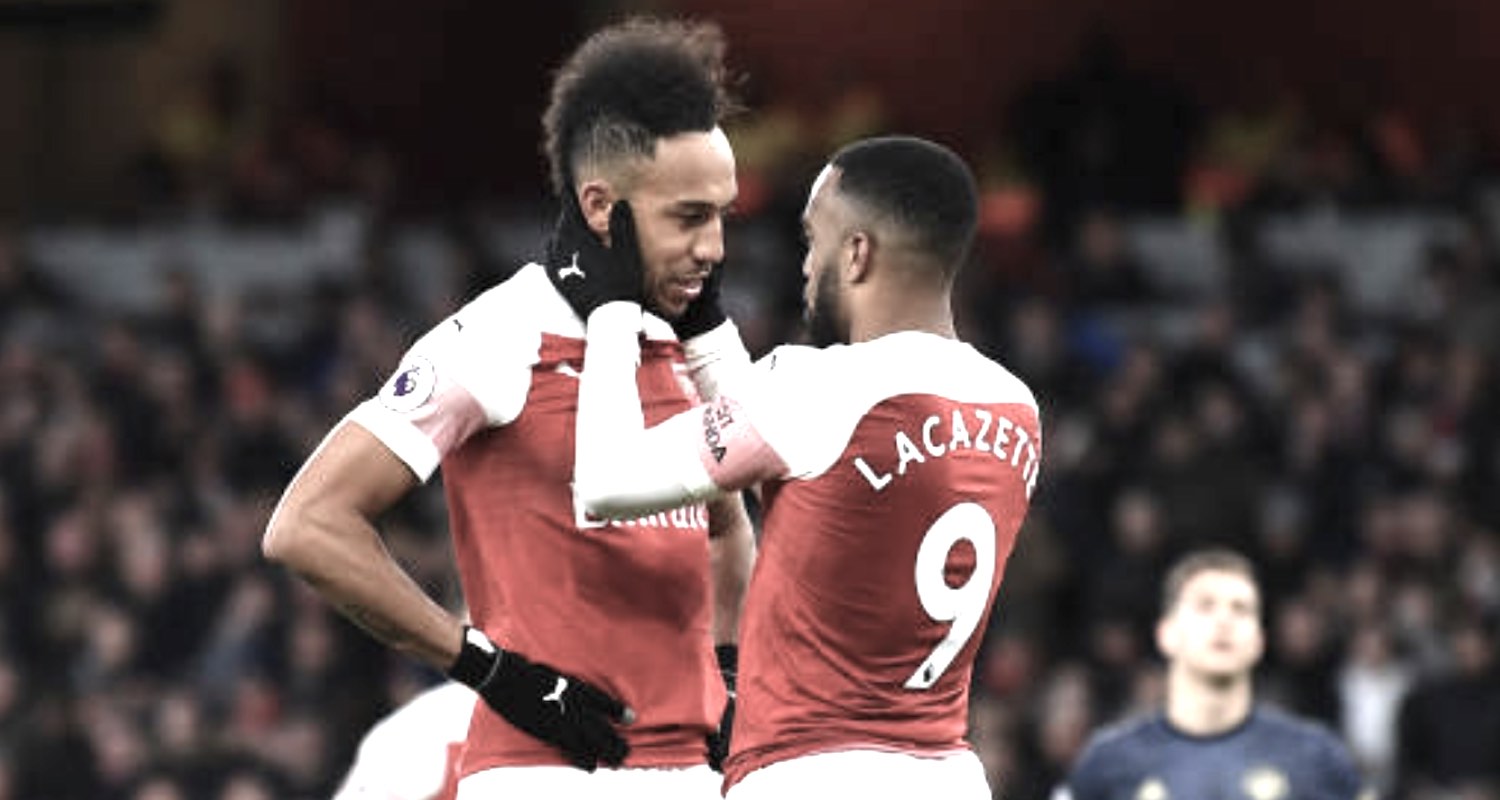 You hear it said very often that strikers are selfish, that they live for scoring goals and that’s it. At Arsenal down the years we’ve seen some players who have been like that, and others who are comfortable enough with themselves that they’re more open to sharing. Think of Thierry Henry who remains the only player in Premier League history to score more than 20 goals and get 20 assists in the one season.

There’s also Dennis Bergkamp who probably loved to provide more than he did to score. Or, at the very least, he got as much out of setting up a goal as scoring one. And right now at Arsenal we have a slightly curious situation, one where a friendship between two forwards is, I believe, making them think differently than at any other time in their careers.

At Lyon Alexandre Lacazette was the main man up front, in much the same way Pierre-Emerick Aubameyang became that at Borussia Dortmund. They both racked up impressive goal hauls, season after season, and that was what drove them. It’s not to say they didn’t provide: Lacazette had 43 assists to his 129 goals at Lyon, Aubameyang 36 assists to his 141 Dortmund goals (at St Etienne where he played more from wide positions he had 41 goals and 26 assists).

Now though, they’re almost like an old-fashioned strike partnership playing in an era when those have become almost redundant. It used to be the norm. Bergkamp and Wright; Bergkamp and Henry. Shearer and Sutton. Shearer and Ferdinand. Yorke and Cole. Now, few teams play with two strikers, and let’s be brutally honest about this – it could have been a problem for Arsenal when, less than 6 months after paying a club record £50m transfer fee for Lacazette, we broke that record in January by lumping £55m on Aubameyang.

If you pay as much as we did for the French international then in the next window go out and pay more for another player who plays in the same position, it could be read that you don’t have sufficient faith in the first signing. Even for a manager like Arsene Wenger who collected forwards throughout his career it’d be easy enough to come to that conclusion, but when you consider the Aubameyang signing was driven almost entirely by Ivan Gazidis and Sven Mislintat then it could easily have caused issues.

Thankfully it hasn’t, and the friendship between the two that blossomed since they’ve been together at the club has been one of the feel-good stories during a period when things have been somewhat turbulent due to the many changes we’ve undergone. We’ve gone down a new road with a new manager, understandably there have been issues to deal with, but the bromance – if you want to call it that – has been rock solid despite the fact both players have suffered a little bit through team selections and substitutions. Unai Emery has fluctuated between wanting to use them both together, to playing with one and leaving the other one out – although I do think the absence of Danny Welbeck has played into this a bit, simply because he knows he’s got to keep these two guys fit and firing until May without the safety net that Welbeck provided.

It was evident on Sunday against Man Utd when you could see that the two strikers were keen to help each other back into form. Aubameyang’s penalty miss and subsequent display against Rennes had left him in the doldrums; while Lacazette fluffing his lines in the derby clearly affected him. We saw his anguished face on the bench after he was withdrawn, taken by some to suggest he was unhappy at the decision to take him off when obviously it was much more about his own performance.

In those circumstances you could understand each one of them deciding to be a bit more selfish, to get the goal that would restore confidence, but at times in this game – perhaps almost to a fault – they were looking for their mate. Then Lacazette was definitely fouled inside the box by Fred, I don’t understand how so many pundits have looked at this and declared it not to be a penalty but there you go, and given what happened the previous weekend I think most people would have been keen for him to get up and take the spot-kick himself.

“This friendship is really really strong. Straight after he fell down, he looked for me and said, ‘You shoot. You have to be focused and you shoot’. We don’t care about who is shooting the penalty, the most important thing is to score. After Laca got the penalty and looked at me, I felt good and I was ready to score because we are having a good period with the team and everybody said that I would score again.”

I think it was a risk, I think the way he took the penalty – as impressive as it was when he didn’t even look at the ball and waited for de Gea to move – was a risk, but it paid off and Aubameyang got a goal he really needed. He’d scored just once in his previous seven games, and this one will have gone some way to help erase the memory of the poor effort against Sp*rs. In fairness to him, he owned that mistake, and made up for it on Sunday, but had Lacazette decided to take it I don’t think there would have been too many objections.

His penalty taking record is excellent, he’s taken 31 in his career and scored 26. To my mind he’s a more solid taker than Aubameyang who, by the way, may have to reconsider his technique now that it’s been made so public. My personal preference is for pace and power rather than last-minute placement, but we don’t need to delve into that now because we’re dealing with a what-if in relation to the United game.

Ultimately though, we have a player who gave up a great chance at adding to his goal tally – the measure through which so many definitive judgements about strikers are made – for the benefit of his mate – but more than that, for the benefit of the team. Lacazette will know as well as anyone else that if we’re to finish in the top four this season and/or go deeper and deeper into the Europa League, then we need a confident Aubameyang, and not one in a rut who is struggling to get beyond a costly mistake.

Maybe some will see it as too selfless or too nice, a sign that he lacks ‘killer instinct’, but I am always well disposed towards a player who sees a bigger picture beyond himself. What’s best for one individual, even if it’s a positive for him, isn’t always what’s best for the team and Lacazette’s selflessness on Sunday was the perfect example of that. He knew the goal would mean more for Aubameyang. Not in the race for the Golden Boot or any individual award, but for Arsenal as we head into what is going to be a hectic and difficult final 6 weeks of the season. The Frenchman can’t play against Rennes, so there’s a burden on his mate to produce on Thursday, and I’m sure that was part of his thinking too.

We hear a lot of talk about ‘team spirit’, it’s generally a kind of throwaway soundbite you get in a post-match interview which often means very little, but what we saw on Sunday was team spirit writ large. Aubameyang deserves credit for getting back on the metaphorical horse so quickly, but it wouldn’t have been as easy with Lacazette giving him a leg up. I think there’s a lot to admire about his character and the way he plays, he seems like a great fit for the kind of Arsenal we all want us to be, and Sunday only solidified that in my mind.

I’ll leave you this morning with the brand new Arsecast Extra recapping and enjoying the 2-0 win over United and all the rest. All the links you need to listen/subscribe are below, enjoy!