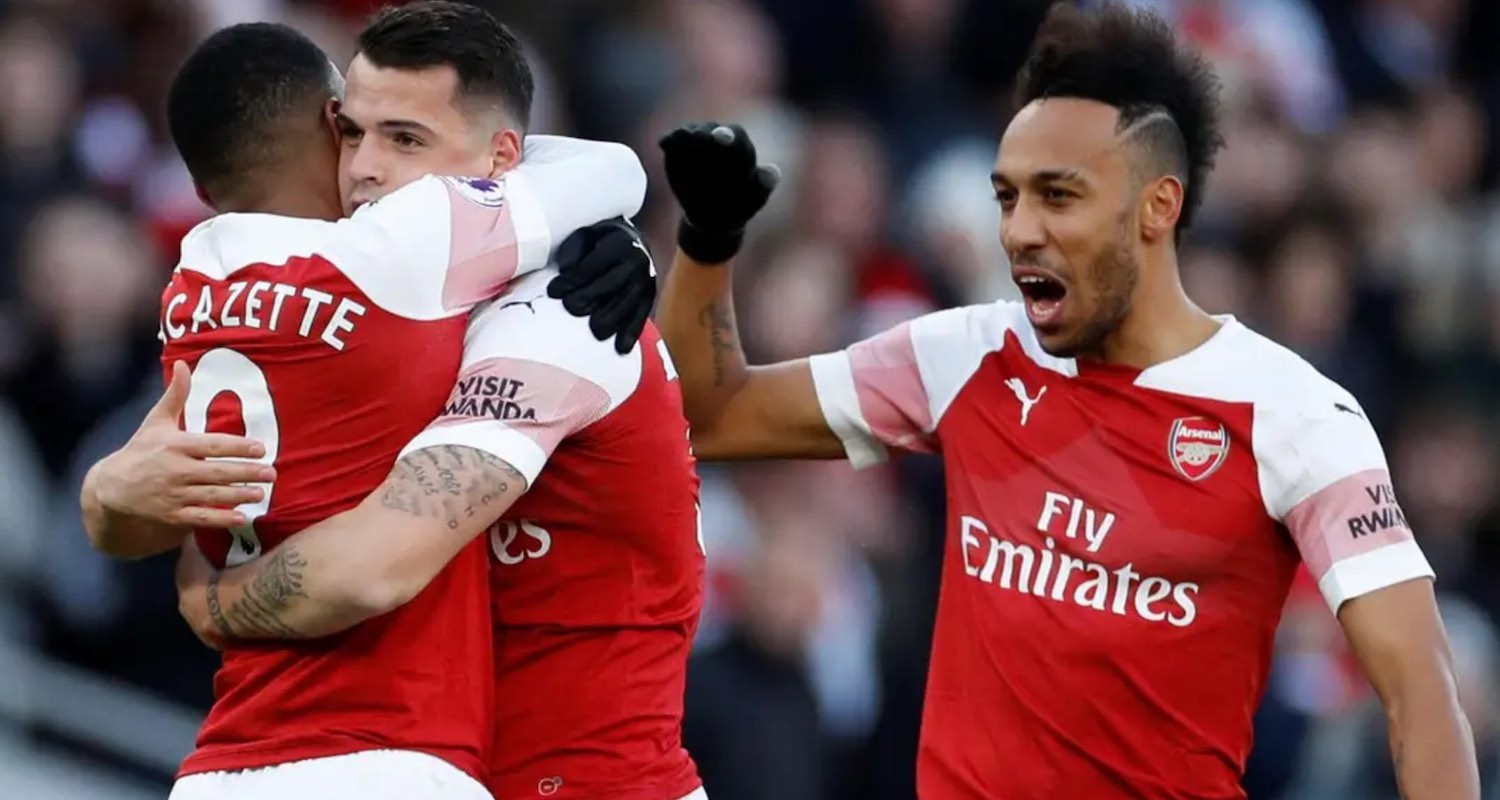 Almost the last thing I expected Unai Emery to do was to play Aaron Ramsey, Mesut Ozil, Alexandre Lacazette and Pierre-Emerick Aubameyang from the start yesterday, which is probably why I should have expected him to do exactly that. The Arsenal boss went for it in a big game at home, and it was brave. He is a manager who has generally erred on the side of caution, but yesterday he erred on the side of ‘Feck this for a game of soldiers, let’s give it a lash!’.

With three centre-halves, a pair of wing-backs and Granit Xhaka to provide a platform for the more attack minded players to do their stuff, it was definitely something of a gamble, but I doubt very much that United’s pre-game preparations considered this line-up as a possibility, so fair play to Emery for giving it a go.

As ever with Arsenal this season there were moments when we had to ride our luck, and Romelu Lukaku hitting the bar in the 9th minute when it was easier to score was one of those. How many times have we said the first goal is crucial in a game like this? So, it was a let-off when the United striker missed, and then a real blow to them when Granit Xhaka put us ahead.

Lacazette fed him outside the area, he took a shot which swerved wickedly on its way towards goal, and whatever de Gea was expecting the ball to do it wasn’t that. He was left completely wrong-footed and I have to say if our keeper had been beaten in that way I’d be asking questions of him. As it wasn’t our keeper though, the tedium of that particular debate can be left to United fans because frankly I don’t care because the ball ended up in the back of the net. Considering how often de Gea has denied us in the past, this was a welcome change.

United hit the woodwork a second time when Fred’s shot came back off the post, Sokratis made a great back-post challenge on Rashford, and Leno made a brave stop at the feet of Lukaku to deny him after United had found time and space in midfield to create an opening for him. We were playing some nice stuff but not really threatening too much, and late in the half a brilliant, committed challenge in the box from Xhaka prevented Rashford from scoring what would have been a very untimely equaliser.

They started the second period very well, and once again Leno was the hero, sweeping up as Lukaku was sent through on goal, before making a superb save from the Belgian after our offside trap failed. The striker was one on one with the keeper, it looked easier to score, but Leno stuck out a foot and deflected the shot over bar. It was a showcase few minutes for the German who has, over the last few weeks in particular, really cemented his position at the club and he deserves serious credit for his part in yesterday’s win.

So too does Ainsley Maitland-Niles who, after a difficult first half, had an outstanding second 45 minutes. He won tackles, remained fully focused on his job, stood up physically to the tests provided to him by Shaw and later Martial, and it was great to see that show of character from him. He was, it’s also fair to say, ably supported by the rest of the team, because despite living on the edge a little, there was a great team effort throughout.

Ramsey ran his socks off, further than any other Arsenal player, and won 8/9 tackles on the day – up there with our season high from Torreira earlier in the season. Xhaka was superb at the base of the midfield, Ozil clever on the ball and willing to challenge for headers, the two strikers were perhaps a little keen to be the provider for the other but nonetheless caused the United defence problems, and Kolasinac literally ran and ran until he puked.

Then the moment which provided some safety in the scoreline. I’ve seen people say the penalty was soft, perhaps it was, but Fred certainly pushes Lacazette in the back as he runs into the box, and there have been times this season when the striker has done his best to stay on his feet despite obvious fouls. Not this time, and Jon Moss pointed to the spot.

Lacazette gave it to Aubameyang, fresh from his miss against Sp*rs last week, and the striker took the exact same penalty – only this time it went in. He spoke to Sky afterwards and explained his technique:

I did a mistake against Tottenham, I looked down at the last moment so I didn’t watch Lloris, and I missed it. Today I watched de Gea, and being focused you score a penalty. We have to practice this all the time, today it went in.

It’s a weird thing, because while I was obvious delighted he scored, I couldn’t help but look at him roll the ball that way and feel like he was taking a massive risk. His explanation makes it more clear, and it’s not really worth debating since the ball went in and he made it 2-0, but I’m sure I’m not alone in having some feelings about the way he took it. Still, much like the Xhaka goal, that’s very much a trifling consideration once you score, and it could well prove to be a very important moment for a player who has definitely been a bit under-par of late.

We brought on Iwobi and Suarez to add fresh legs to the defensive effort, and both did well as United tried, but ultimately failed, to get back into it. Rashford probably should have done better with a late header at the back post, but at that point I don’t think it would have been anything other than a consolation. Eddie Nektiah came on too, and contributed to the effort in the final few minutes, and in the end we had an Arsenal win and a clean sheet to take us into the four, ahead of United and only a point behind Sp*rs.

In terms of results it’s been a great weekend for us, with Chelsea and our North London rivals dropping points, and perhaps we’ve put a bit of a dent in United’s momentum too, which would be very welcome. Afterwards, Unai Emery said:

We responded and sometimes you’ve seen different systems and different players, but above all we can feel today very proud of every player. Above all I want to say thank you to our supporters because they helped us a lot and we can create a big atmosphere like today for the next matches and for Thursday. I think it’s very important. The players did very well with a very big spirit and big commitment for the work we’ve done.

It was another game in which the Spaniard switched things around in terms of personnel and formation, and it worked. I do think the players are now well on top of what he wants in this regard. Earlier in the season we were asking if the constant shuffling was almost confusing for them, but over the last few weeks we’re seeing a base-level understanding of how Emery operates, and results and performances have improved.

I know there was disappointment last week against Sp*rs, but the glass half full outlook on that is that it is a game we should have won and putting ourselves in a position to do that away is a change from what’s come before. We’ve now beaten Sp*rs, Chelsea and United at home this season, and ahead of Thursday’s second leg against Rennes, this is a real boost. Obviously the first leg did not go the way we wanted, and I don’t think it was Emery’s finest moment by any means, but he’s showing himself to be a coach who can manage a potential crisis well. Generally, when we’ve needed to respond we’ve been able to do that, and that’s definitely a positive.

I think before the two games against Sp*rs and United if you’d offered people 4 points they’d have taken your hand off, so I think it’s been a good return from the last two weekends. It’s always deflating when you miss a penalty in a game of that importance, but stepping back from that, we’ve put ourselves in a good position for the final Premier League games of this season – and there’s always something extra to enjoy about a win over Man Utd. We don’t play again domestically until Monday April 1st, when we entertain Newcastle, but we can now go into this Interlull buoyed by an excellent result against one of our top four rivals, and hopefully pick up where we left off when the action starts again.

A couple of small things to finish. First, Laurent Koscielny playing on after suffering a serious gash to his leg epitomises the character of the captain. He is literally putting his body on the line for us, game after game, and considering what he’s coming back from and at the age he’s coming back from it, his performances have been beyond what I expected. He deserves massive credit for it all, and if there are young players at Arsenal looking for someone to set an example, he’s exactly it.

Secondly, the idiot who ran onto the pitch yesterday will, I’m sure, get properly punished for his stupidity, but coming on the same day as the Jack Grealish incident in the Birmingham derby, it was particularly dense. It wasn’t on the same level as that one, but when it comes to incidents like this, fining clubs doesn’t really cause any kind of deterrent, and realistically the authorities will have to look at harsher punishments, up to and including points deductions.

I don’t think what happened yesterday at the Emirates merits that, but you can be sure that’s where it will go if it continues to occur. There’s a good reason why football stadiums no longer have fences to keep crowds off the pitch, so however wound up you are, or however much you want to celebrate, stay in the stands.

Finally, James and I will be recording the Arsecast Extra this morning. If you have questions or topics for discussion, send to @gunnerblog and @arseblog on Twitter with the hashtag #arsecastextra – or if you’re on Arseblog Member on Patreon, leave your question in the #arsecast-extra-questions channel on our Discord server.

We should have that ready for you before lunch, so until then, take it easy.