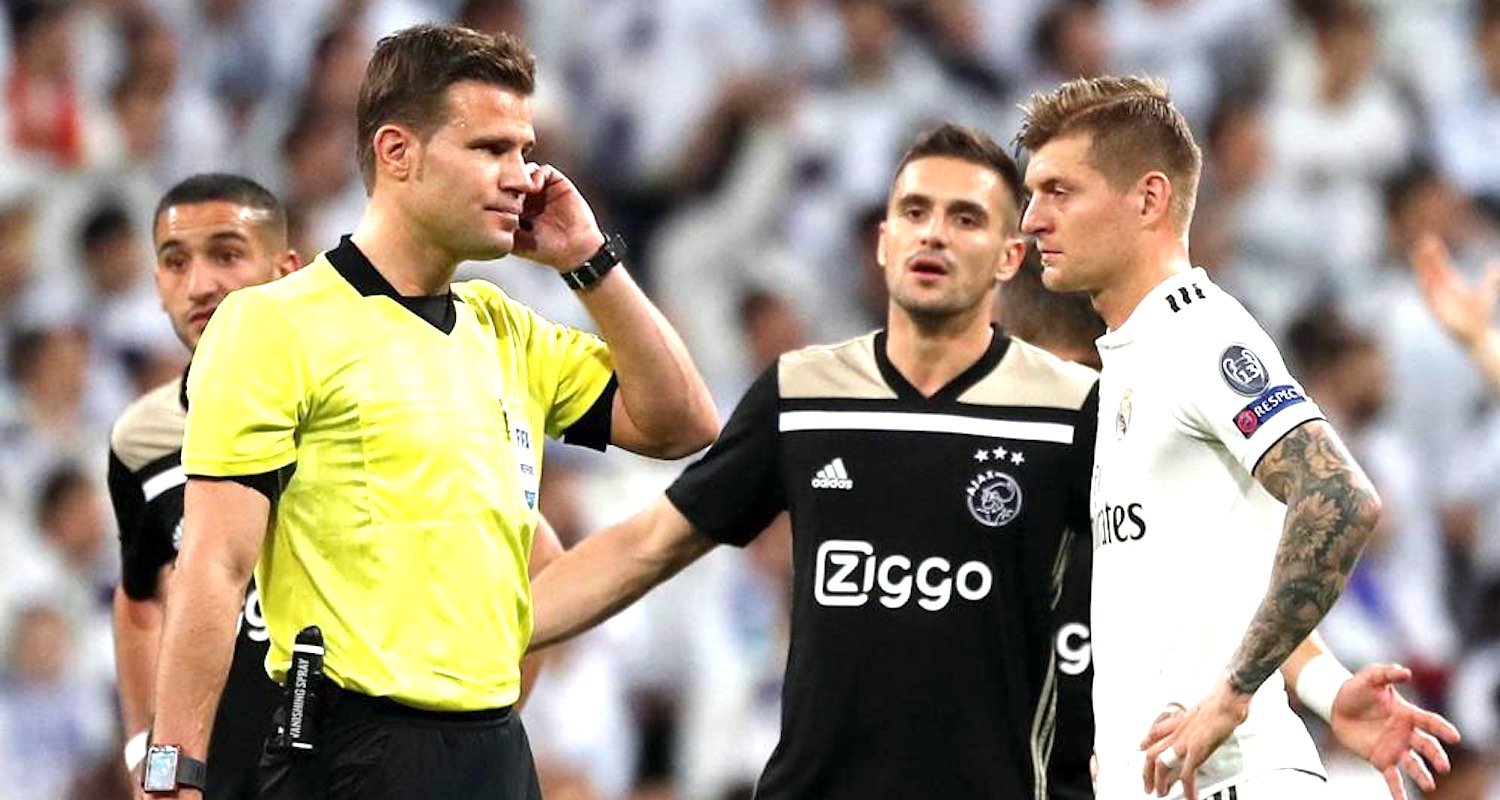 I had a dream last night that Arsene Wenger was doing a speaking tour, and for some reason he wanted to interview me on stage. I was all ready to go, in the auditorium and everything, but somehow I was then outside and I’d flung his favourite scarf halfway up a tree. He got really upset and started to cry, so I robbed a car and gave him a lift back to his hotel which was also halfway up a tree. I could find nowhere to park.

Fun times in the Champions League last night, in one of the games anyway, where Ajax went to the Bernebeu and knocked out Real Madrid with a sensational 4-1 win. I know how much we still love our 1-0 there, so that’s a result they’re going to enjoy for a long, long time. At 2-1 they scored a lovely goal, former Southampton man Dusan Tadic completing an excellent move with a cracking finish into the top corner.

Then, however, VAR got involved, and we spent ages waiting for some faceless bloke in a room watching a video over and over again trying to decide whether the ball had gone all the way over the line in the build-up. Then there were suggestions they might be looking at a possible handball, and at home the TV viewers saw a referee looking somewhat perplexed as he tried to deal with players from both sides chirping away at him while at the same time listening to whatever communication he was getting from the VAR control room.

Hurrah! Ajax celebrate again, but man that was terrible and surely we have to use that as a lesson about how this technology is implemented. I know there are people who are hugely opposed to VAR in any form, who believe it will strip something fundamental away from the game, and on the basis of what we saw last night you can understand that completely.

The reality, however, is that VAR is here to stay, and we need to ensure that the kind of nonsense we saw last night doesn’t become a regular part of it. If it takes five minutes to decide something because the potential issue is so inconclusive then it tells you this isn’t an error so glaringly obvious that we need to delay a game for that amount of time. Also, this was about a possible throw in on halfway – Ajax did a lot after that, it wasn’t about an egregious foul the on-pitch officials missed, or an offside being crucial in the goal itself being scored. Do we really need VAR for a throw-in?

What it shows, in my opinion at least, is that VAR has to have a time limit. If, for example, in a situation like last night you can’t decide conclusively within 60 seconds that the offence you’re checking has occurred, then the default is to give the benefit to the attacking team. So, the Ajax goal would have counted after a minute, meaning none of us at home having to watch the same replay over and over again which simply highlighted how marginal the ‘offence’ was. Put a goddam Countdown timer on screen if you like, add to the drama that way, but don’t think that in football’s quest for officiating perfection viewers want to spend that much time watching the same thing over and over and over again. We don’t.

The other key thing to consider are the fans in the stadium who don’t have the ‘benefit’ of seeing those replays. What they got, having paid for their match tickets and travel and transport and everything else, was a five minute delay to an exciting game. They obviously knew there was VAR related stoppage, but that was it. They saw the referee and the players and nothing else. Again, maybe the VAR countdown clock inside a stadium could help in the future, but to my mind there’s something intrinsically wrong with a division of the game between fans in the stadium and people watching at home.

Remember, TV cameras are there so we can be part of what the supporters in the stands experience. We’re in their world, and now it seems like they’re somehow the afterthought. That’s not right. However much you’re an advocate for technology helping officials or the game in general, you cannot implement rules which make the people who actually attend games the second class citizens. I think that’s a very dangerous road to go down, we’re already on it, and it’s important that we don’t go any further in that regard.

Like any new technology there were always going to be teething problems with VAR, and issues that were unforeseen. Given that there’s no turning back from it now, it’s absolutely crucial that when things like last night happen, the lessons are learned from it. Does anybody care that much about everything being 100% right that they’re willing to suffer delays like that? And if it can happen once in a game, it can happen multiple times. The damage that will do to the sport itself is not worth thinking about it. Hopefully it will serve as an example of what we need to avoid, and that as VAR becomes more prevalent genuine common sense is applied to its implementation because it should benefit the game, not damage it.

Righto, that’s your lot for this morning. Arsenal are off to Rennes today ahead of our Europa League tie tomorrow. We’ll have all the team news throughout the day over on Arseblog News.