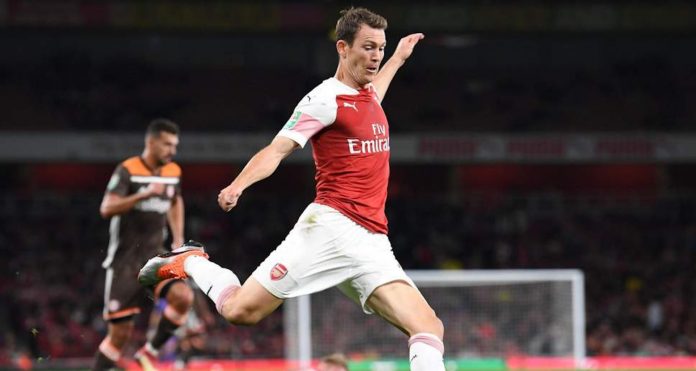 Morning all, a quick Saturday round-up for you. We play Man City tomorrow, of course, in a fixture which demands a lot of Unai Emery and his players. Not simply because of how good they are or how determined they’ll be to respond to the midweek defeat and stay in the title race, but because of our last away game against one of the big sides.

A little over a month ago we went to Anfield and got absolutely battered. Since then we’ve lost Hector Bellerin to a season-long injury and Sokratis won’t be available until the end of February, so making sure we give a better account of ourselves becomes even more difficult, but still absolutely vital. We’ll have more on that game tomorrow, as we ponder how Emery might set his team up, what he’ll do about right back and all the rest.

We have been boosted by the addition of Denis Suarez whose arrival on loan from Barcelona gives the head coach another option in the attacking end. Quite how much difference that will make against a team as good as City remains to be seen, but Emery did speak about the new signing, a player he knows well from the season he had him on loan at Sevilla.

As I said yesterday, my feeling is that he’s going to use him from the right hand side to try and give the team a bit more balance. Down the left there’s already a good partnership between Iwobi and Kolasinac, but on the other side there’s nothing like that, so we tend to overload the left, teams know that and can set up to nullify us. Being able to threaten down the other side would obviously be beneficial, but when speaking about Suarez yesterday Emery wasn’t entirely specific about where he was planning to use him:

He can play right, left and he can play inside like a 10 player. I will use him in all positions. He played left winger for us with Sevilla, with Villarreal more right winger and with Barcelona more inside.

Interestingly (or not) his season at Villarreal was easily his best and most productive to date, and for the most part he played from the right hand side, so perhaps that’s in Emery’s thoughts. It’s a situation that’s been complicated by the injury to Bellerin though. If he were fit you could easily see how the two would work together but he’s gone until next season, and his absence is a blow that I don’t think we’ve fully felt the repercussions of yet.

Emery has options, but none of them are particularly convincing. It probably says a lot about them that right now Carl Jenkinson seems to be the best of them. As much as we all love his Gooner credentials, there is a reason he has been on the fringes of the team all season and his introduction against Cardiff on Tuesday was his first Premier League appearance in over two years. Ainsley Maitland-Niles is injured for tomorrow it seems, and although his qualities seem best suited to replace someone like Bellerin, there’s a steep learning curve to play a position that’s not naturally your own and he’s struggled with that when deployed there.

Then there’s Stephan Lichtsteiner whose signing becomes more and more of a puzzle as the season goes on. Sometimes you can see logic in signing a back-up for a key player who has different attributes. Up front, for example, you could use a taller, more physical striker to give you a ‘Plan B’ if things need to be changed in a game, and even in midfield a manager having players of differing qualities makes sense and allows him to adapt to in-game situations or particular opposition.

Every other signing made sense. We needed a goalkeeper. We needed an experienced centre-half. We needed a defensive midfielder. The addition of another central midfielder was a bit of a bonus and Matteo Guendouzi looks something of a find, a diamond in the rough. But it’s almost impossible to get your head around the idea asking a then 34 (not 35) year old to come in and do what Bellerin does.

I thought Jim made a great point on the Arsecast this week. We haven’t just lost a full back due to Bellerin’s injury, we’ve lost a key part of our attack too. The Spaniard has 5 Premier League assists this season, just one less than Aaron Ramsey who leads the way with 6, so the absence of Bellerin doesn’t just rob us of our best right-back by some distance, but a player who creates in the final third from the right hand side.

I don’t envy Emery trying to work out what to do to cope in this particular situation. Maybe the defensive experience of Lichtsteiner paired with the attacking threat of Suarez will give us a hybrid Bellerin. It takes the some of the onus off the veteran to get forward (and thus having to get back), and maybe allows the new boy a bit more freedom in the opposition half.

Perhaps that’s just my crackpot theory, and for various reasons I’m not sure tomorrow’s game against City is when we’ll see that, but Emery has to find a solution from the squad he has and it needs to work because there’s a lot of football still to play this season. Best of luck to him.

Right, that’s your lot for this morning, back here tomorrow to preview the Man City game. In the meantime, there are two big dogs here who need a good run and don’t care how cold it is!