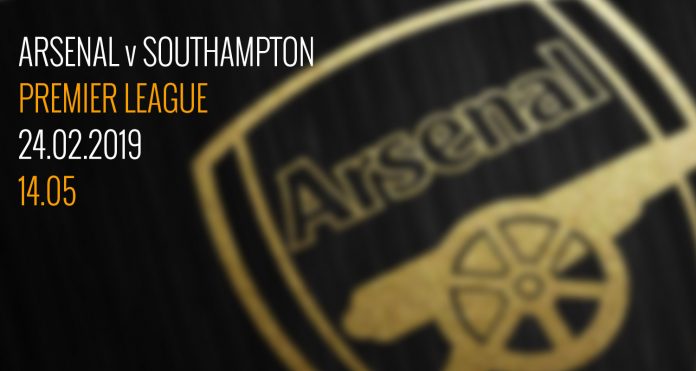 Premier League action today as we take on Southampton at the Emirates. It’s a little over two months since we last faced the Saints, a late Charlie Austin goal put an end to our 22 game unbeaten run, and we’ve lost a further three and drawn one of the subsequent nine games.

Today we’re likely to be without Laurent Koscielny after he came off against BATE on Thursday night, so Sokratis should slot in to cover him. We await news of Ainsley Maitland-Niles who missed out in midweek due to illness, but beyond that and the long-termers, Unai Emery has a pretty full squad to choose from – which makes it a bit difficult to predict what he’s going to do.

Having reverted to a back four on Thursday, I hope we stick with that again today and rely on the array of attacking talent we have at our disposal. For games like this, I don’t think the back three makes any more defensively secure, and we saw the benefit of having that player further forward because Mesut Ozil gave our wide players someone to combine with.

I think we might see a midfield change with Lucas Torreira coming back into the team, possibly ahead of Matteo Guendouzi who was very good again but must surely need a rest at this point, and it’s the kind of game that Ozil should be given the nod for again. At home, mid-table opposition, it ticks all the Emery/Ozil selection boxes, and if he can build on a decent performance in midweek then all well and good.

However, the manager has plenty of options if he wants to change things around. Aaron Ramsey is ready to go, he has Alexandre Lacazette available again and, due to his extended Europa League suspension, I think we might see him a bit more in the Premier League with Pierre-Emerick Aubameyang – without a goal in his last three games – perhaps relegated to the bench this afternoon. Whatever team he picks though, it should be strong from an attacking point of view, and with depth on the bench should we need to change things around.

If Manchester United drop points today against Liverpool, and Chelsea out of action because they’re playing in the Carabao Cup final, a win today would put us back into the top four. Obviously there’s still a long way to go but it would put a little bit of pressure on those around us, and points on the board are always better than games in hand. The win over BATE was comfortable but not altogether convincing. 180 minutes without a goal from open play against a team like that is a bit of a worry, so hopefully today we can combine a good result with a performance that provides some encouragement too.

It all feels a bit flat at the moment, despite the fact we’re well in this chase for a top four place, and that everyone – players and fans alike – could do with a bit of a lift. Of course winning comes above all else, but finding some form and rhythm at this point of the season can’t be underestimated. We’re going to need a good run to finish in the Champions League places, and I don’t think we can do that without also playing well. There are two home games before we face Sp*rs in what’s going to be a massive North London derby, and if we can build some momentum going into that then it’ll be very useful.

It’s something Emery is aware of, saying:

We also have to create a good feeling with our supporters, giving them our energy and quality. We are doing more here at home than away but keeping consistency is my target with this team.

Hopefully that starts today and we see the kind of display that would give you optimism in that regard. Fingers crossed.

Elsewhere, some interesting quotes from Granit Xhaka on Mesut Ozil. He says:

You can see Mesut is important for us on the pitch – and off the pitch, too. We’re happy he’s back. He was a little bit injured and he was a little bit sick in the last few weeks. But he is now 100 per cent back. I hope Mesut can be key for us and that we can keep this run going for the next few months as we go for the top four.”

I guess these are the kind of absences Emery was referring to which impacted his team selections. A 100% fit and in-form Mesut Ozil undoubtedly makes us a better team, so let’s hope that’s reflected his performance today if he’s picked. The players themselves know precisely what kind of talent he has, and how it’s beneficial to them as a whole if he’s playing well, and Xhaka’s comments follow on from Iwobi and Sokratis who have both extolled the virtues of the German this week.

Whatever issues exist behind the scenes, you get the clear sense that his teammates want him in the side because he can make things tick. Without him we’re a basically functional team but without much craft, and with him we possess someone who can add a little oil to the engine. Which isn’t to say just sticking him in the team makes us better – there’s an onus on Ozil to perform, he’s got to step up too after all this backing – but you just feel we have a better chance of winning games if he’s in form. If he can finish the season with a flourish, then all the better for us.

Right, that’s your lot for now. Join me later for a live blog and all the post-game stuff on Arseblog News.