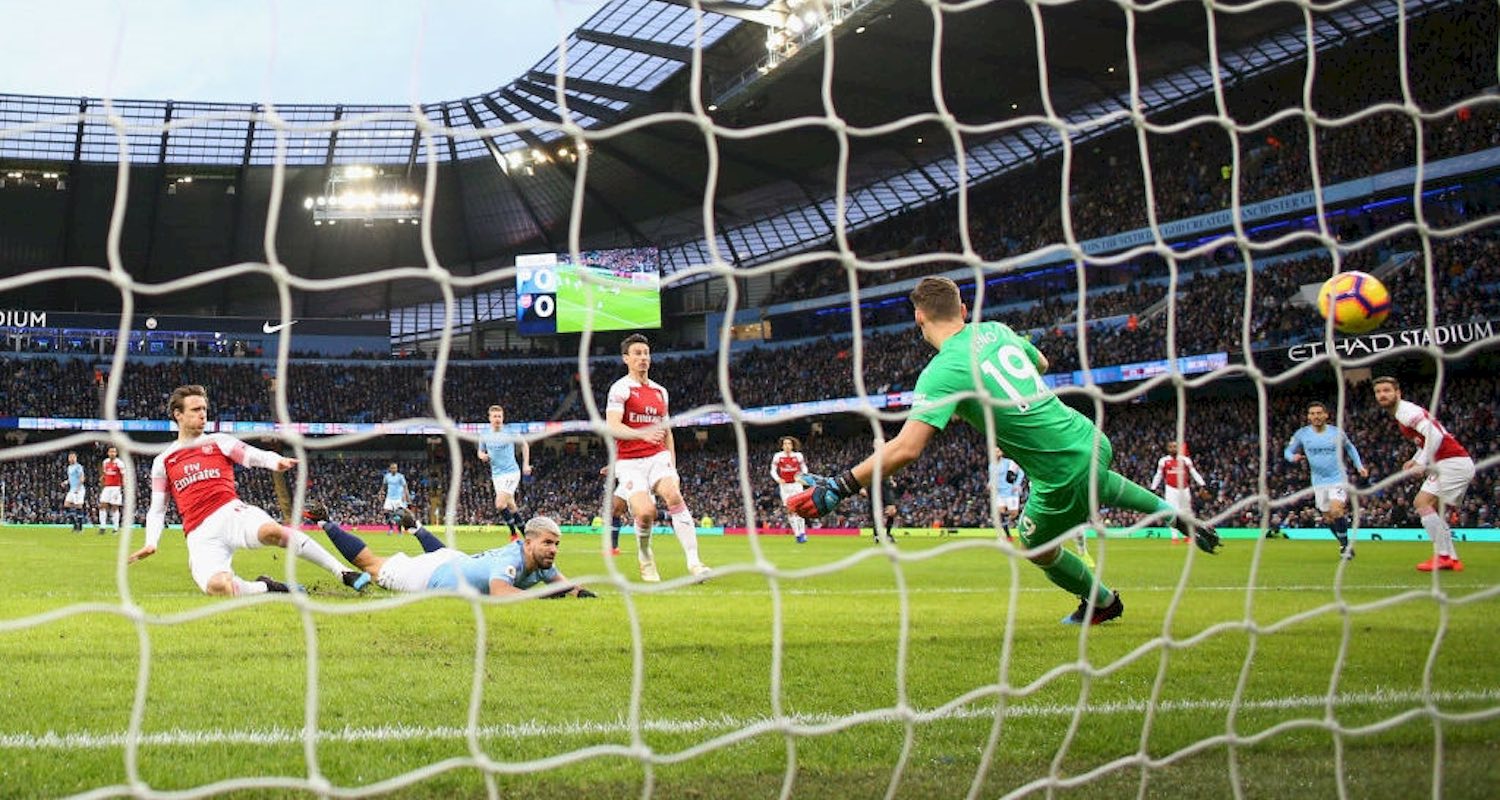 Let’s be brutally honest, nobody expected us to win yesterday, even taking a draw seemed like a tall order, so defeat to Man City should not have come as any surprise. We lost to this exact scoreline at the Etihad last season, so we’ve been there, done that, and worn this particular t-shirt before.

I suppose what’s disappointing is that in general we had quite an encouraging first half, particularly after making such a dreadful start to the game. Alex Iwobi got caught in possession on the edge of our box, a catastrophic error so early, a quick cross and the lethal Sergio Aguero was there to score the first goal of his hat-trick. City were energised, and should have had a penalty when Mustafi had one of his brain farts and clearly pulled back Aguero as he drove into the box. Somehow the referee played on and the Arsenal man stayed on because he surely should have seen red. I shudder to think what kind of a day we’d have had playing essentially the full game with 10 men but I also shudder when Mustafi is on the pitch so …

However, we got back into it with a smart corner routine when Monreal flicked on Torreira’s delivery and for some reason City thought Raheem Sterling was the man to deal with Laurent Koscielny who headed home to equalise. They had lots of the ball, but there was an energy about the way we defended that was pleasing, and on the ball Matteo Guendouzi stood out against a team of that quality with a composed and hard-working display that belied his 19 years.

We didn’t threaten hugely, Aubameyang was almost sent through by Lacazette but the keeper was out quickly to sweep up, and there was a Kolasinac shot, but the timing of their second goal was terrible. It was typically slick City play, but Stephan Lichtsteiner was far too easily caught out by the movement of Sterling who squared for Aguero to tap in at the back post for his second. Just before the break it felt like a real blow, but maybe we could find a way back again.

13. None. The first number is City’s attempts on goal in the second half. To our none. Zero. And as much as I can compartmentalise a defeat to Man City whose performance after the break highlighted the gulf in quality between the two sides, it’s still frustrating that we can be so terribly ineffective under Unai Emery. Just last week we played 66 minutes at home against Cardiff without having a shot on target until Aubameyang’s penalty broke the deadlock, so this issue isn’t simply down to the quality of City.

We have a squad with two excellent strikers. We have Aaron Ramsey and Mesut Ozil – both of whom started on the bench and only the former was introduced. With that kind of talent at our disposal, to go through an entire 45 minutes without even a shot is disappointing. Now, I feel for Emery in many ways. He inherited an imbalanced squad in need of genuine investment, particularly at the back, and during the course of the campaign has lost three key players to injury and received no backing from the club in terms of replacing them. Snagging a Barcelona cast-off on loan is no way to cope with the absences he’s having to contend with, so he’s got his work cut out for him.

Even so, it doesn’t mean we can’t question some of his decisions. And let me make it clear, having some issues with his decision making during games isn’t saying you think he’s a monster and you want him fired, it’s simply analysing a game of football which is kinda why we’re all here, right? The changes he made yesterday didn’t sit right with me. I thought Ramsey for Iwobi was spot on, and while everyone is keen to see a new signing, I can’t quite understand the logic of replacing Kolasinac with Denis Suarez if you’re really serious about trying to get something from the game.

He just arrived this week, did a bit of training and was preferred to Ozil who captained the side on Tuesday night. I know there are issues with him away from home, but Suarez has played less than 20 minutes of league football this season and his performance reflected that yesterday. He was off the pace, his touch wasn’t great, and I don’t know what exactly Emery thought he might contribute.

We had two strikers on the pitch playing in almost perfect isolation, with nobody able to provide them with any service. Whatever else you want to say about Ozil, he can do that, or he can make the passes which help others do that, and the decision to leave him on the bench while throwing Suarez on was, in my opinion, the wrong one. Do I think Ozil would have turned the game around? Probably not, but I think he’d offered more than the new boy who had a debut to forget. In truth, I don’t suppose it really matters that much but it was further evidence of the lack of trust Emery has in our highest paid player, and simply added more fuel to that particular fire.

Aguero completed his hat-trick with a goal that looked like handball, but I don’t think it was deliberate, and any complaints about it seem a bit churlish when you consider we got away with Mustafi’s nonsense early in the game. Leno had to make a string of saves as City dominated but thankfully never really turned the screw, and in the end the final whistle which felt a long time coming ended what was a dismal second half. Afterwards, Emery said:

They showed their superiority today over 90 minutes. Above all, the second half cost us. he next match for us is very important against Huddersfield. These are the matches where we can take the regularity to be in the position we want, near to the top four. We know it’s difficult and we need time as well. We must be demanding of ourselves to find that.

In essence, he’s trying to compartmentalise this defeat and this performance, and I understand that. City are at a level we’re nowhere near, so when you go into a game that you expect to lose and that’s exactly what happens, you can’t be that upset by the result. Aspects of the performance though, that’s a bit different, and this latest loss on the road is another to add to our growing list of poor away days against the other teams in the so-called ‘big six’.

It’s a shocking record really, just 7 points from the last 63 in these fixtures. We remain a soft touch, but I guess part of Emery’s longer-term remit will be to address that because it’s a bit embarrassing now. In the much shorter-term he’s got to get his team back on track for a game against Huddersfield next weekend with the Europa League then a consideration as we start to juggle domestic and European competition.

There’s also something to work out when it comes to our right-back situation because yesterday was further evidence, if it were needed, that Stephan Lichtsteiner is really struggling at this level. No player picks himself, so any disgruntlement needs to be directed towards whoever thought a 34 year who had played for years in the much slower Serie A thought he’d be able for the pace of the Premier League. And, of course, the man who picks the team.

Even with all his experience yesterday he was miles away from being good enough, and as I said yesterday the repercussions of Bellerin’s injury will become really apparent as the weeks progress. Again, it’s a situation in which I have some sympathy for Emery because he hasn’t been supported well enough by the people running the club, but he’s got to find a solution for that position now because Lichtsteiner isn’t it.

So, a defeat that hurts but one which I do think we need to put behind us and not dwell to much on. Our next three Premier League fixtures are Huddersfield, Southampton and Bournemouth. Without taking anything for granted they are, on paper, games we should win, and if we have any hope of finishing in the top four they’re games we have to win. After that, it’s a North London derby of some real importance, so building some momentum going into that would be very welcome.

Right, that’s that. James and I will be recording an Arsecast Extra later this morning. If you have any questions, please send to us both on Twitter @gunnerblog and @arseblog with the hashtag #arsecastextra.

We’ll have the pod up before lunchtime. Until then.