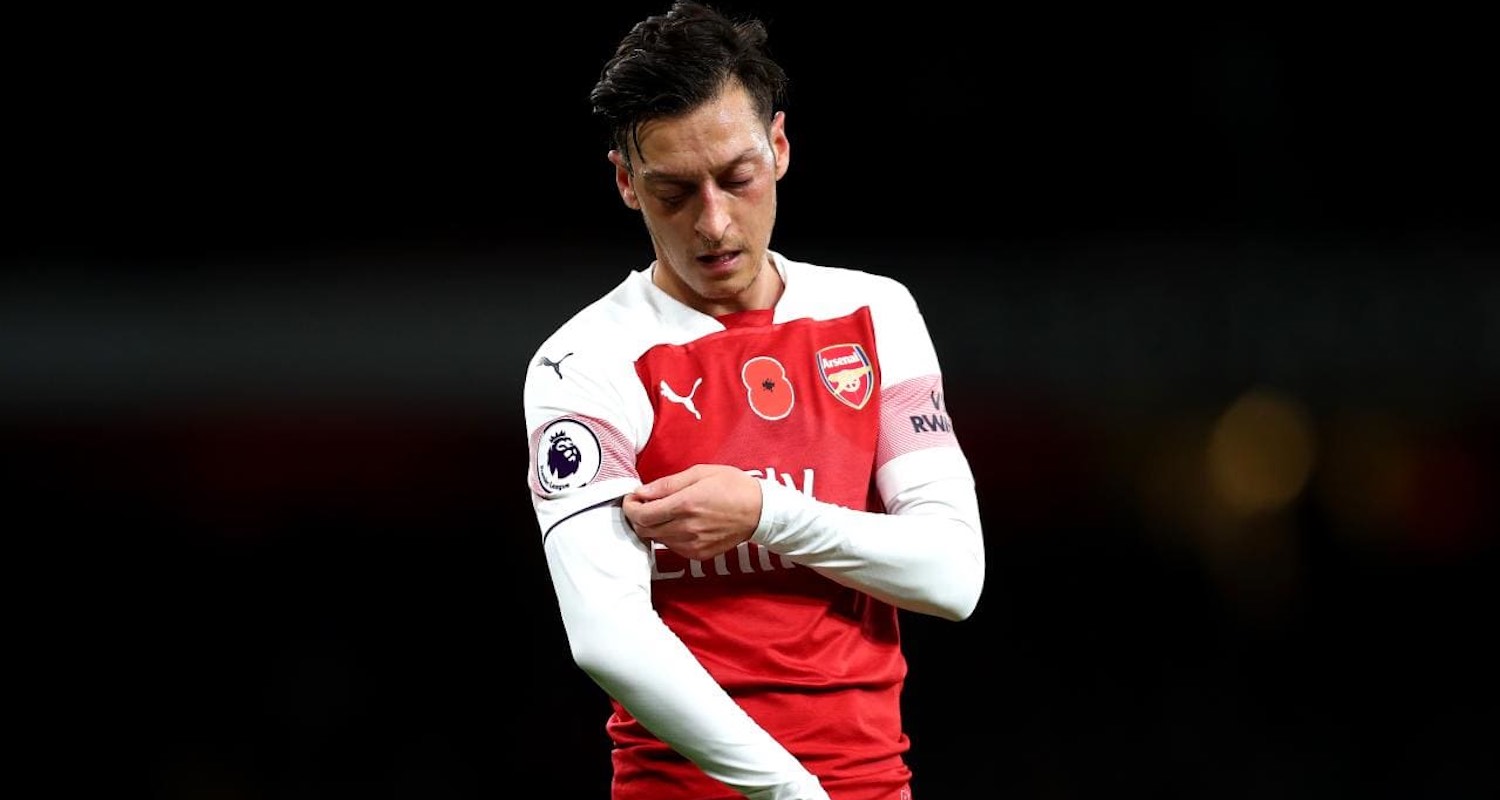 Just a whole pile of no news. So, I guess we’ll leave it there for today, thanks for reading, and I’ll be back tomorrow … ok, ok … there’s the Mesut Ozil Tweet which has got people talking in a big way, and I’m being somewhat diplomatic there. Yesterday evening the German, or his social media team, or his social media team with the tacit approval of the German, sent out this:

'When you start supporting a football club, you don't support it because of the trophies, or a player, or history, you support it because you found yourself somewhere there; found a place where you belong.' ?? || #DennisBergkamp pic.twitter.com/kKM8kDhm8T

Some will say this Ozil simply demonstrating how much he loves Arsenal, a reminder to the fans that while he’s out of the team he’s still one them (he’s not, let’s be real – very few players are fans of the clubs they play for. It’s a job). Others will say the timing of this, coming after a bad result, is a way to play to the crowd because we were terrible against BATE Borisov, and when you play that badly and results are poor, it’s natural that people will wonder if Ozil could have made a difference.

Personally, I think it’s a pretty cynical move – because anyone with half a brain can see that this would immediately create a discord among fans. If you don’t think it has, check the replies which are full of ‘Fuck Emery’ and ‘Fuck Arsenal’, it’s Ozil v Emery throughout, and anyone who dares to suggest this wasn’t just an innocent Tweet expressing his heartfelt love for the club is jumped on. Watch the first few minutes of this video by James to get a flavour of what he was accused of for saying this was basically Ozil basically pitting himself against Emery in public.

Whether people agree with that or not is up to them but the reality is there in the replies on social media, and even of you want to dismiss it as ‘just social media’ and not real life, Ozil – or Ozil and his social media team – sent this message to his 23.8m followers on Twitter, his 31m followers on Facebook, and his 18.7m followers on Instagram with the full knowledge that he has a legion of very passionate fans who are immediately going to side with him. And it’s one thing if they were all just “Yes Mesut, we love you”, there’s a significant element of that fanbase who will lash out at anyone they perceive to be anti-Ozil.

I don’t think I’ve ever known a footballer to have that kind of following before. I genuinely think there are people who support Ozil more than they support Arsenal. And look, we all have our favourite players, but this is certainly a new, somewhat disquieting, phenomenon. It’s almost like the people who are fans of Beyonce or Taylor Swift who, at anything they consider critical of their Queens, mobilise and round on those who are expressing that opinion. That’s what it’s like with Ozil. If you say “I don’t think Ozil played well today” you get stuff like “Well, you just hate him”, which is quite the leap. It’s a simple example, but it happens all the time, and I’ll tell you who knows this better than anyone – apart from the people who bear the brunt of those fans – it’s Mesut Ozil and his social media team.

They’re not stupid, they know as well as anyone else how to play the game, and they’ve helped fashion this PR machine around him so you only ever see the perfect Mesut at all times. And this might be verging on blasphemous to some of his fans, but he’s not perfect. Like every human being, and every footballer, he’s got his flaws and some of those are why this situation has arisen this season. Believe it, or don’t, but that’s the truth.

So, Arsenal lose 1-0 to BATE Borisov, play dreadfully, questions are being asked about Unai Emery, everyone can see we could use more creativity in the team, we have a hugely talented playmaker who didn’t make the squad and has been on the fringes of the team for months, and at the very least most people would say it couldn’t have been any worse with Ozil in the team on Thursday night. Fans are frustrated and not enjoying the football we’re playing, and it’s obvious that there’s very public disenchantment.

Then Mesut Ozil, or his social media team, or his social media team with the tacit approval of the Mesut Ozil, send out a Tweet – invoking the name of a legendary player that everybody loves – which anyone can see is going to get people wound up. And that’s exactly what it did. Job done. I assume that’s what they wanted to do, and it worked. They took advantage of ill-feeling towards the team/manager after terrible result to generate goodwill for Ozil, and if that’s not the most cynical thing I don’t know what is.

Frankly, I’m not pro-Ozil or anti-Ozil. He’s just a player who is massively talented but too often inconsistent. I’d actually like to see an in-form Ozil in our team because we’d be better if he was in it and playing well. I’m not pro or anti-Emery, he’s a coach who is doing a job I’m not fully convinced by yet. But here’s what I definitely am: Pro-Arsenal, and all this has made an already unhealthy situation even more so, and there was no need for it.

I also wonder how they think this is going to go down with Emery and the decision makers on the football side of this club. There’s a very real chance that it could backfire, and make matters more tense and difficult. Make no mistake, Arsenal as an institution can’t be seen to be weak in this situation, and all the angry Twitter fans in the world won’t have any influence on team selection, regardless of how loudly they shout.

I’m told that Ozil loves life in London. I don’t doubt that he has genuine affection for this club, but he and his people have got this one wrong. And if you want to be really hard-boiled about this, looking at football as a business first and foremost, this could be seen as a shot across the Arsenal bows about his future. It’s telling them that he is in a strong position, he still has two years of his £350,000 a week contract remaining, and that if they want him to go then they’d better be prepared to cough up or make it worth his while.

I’ve never known a situation like it at this club, and I hope we never see anything like it again because it’s toxic. If you’re on Ozil’s side, good luck to you. I want what’s best for Arsenal, and the more this goes on, the more publicly it’s played out, the worse it’s going to get. It’s like a festering wound that keeps getting scratched, and it’s damaging across the board, on the pitch, off the pitch, on the training ground, and online. I know some will respond by saying leaving Ozil out is damaging too, they may have good reason to suggest that during this period of indifferent form, but it goes beyond that in general, and this Tweet did not help one bit.

Hopefully there’s somebody at this club with the strength of character to sort this out one way or the other sooner rather than later, because it’s going to just get worse otherwise.