Friends. It may not have escaped your notice that as a country, the United Kingdom, and in particular England, is in the throes of an unprecedented crisis. Somehow, our betters have managed to manoeuvre us into a horrific position where serious disturbance is a real possibility. An existential catastrophe the likes of which we have not seen since Suez is looming. If it happens it will lead to untold misery for our country and the effects will be felt for years to come.

I am talking of course about the dread possibility of Liverpool Football Club winning the league.

The Act is divided into three parts: 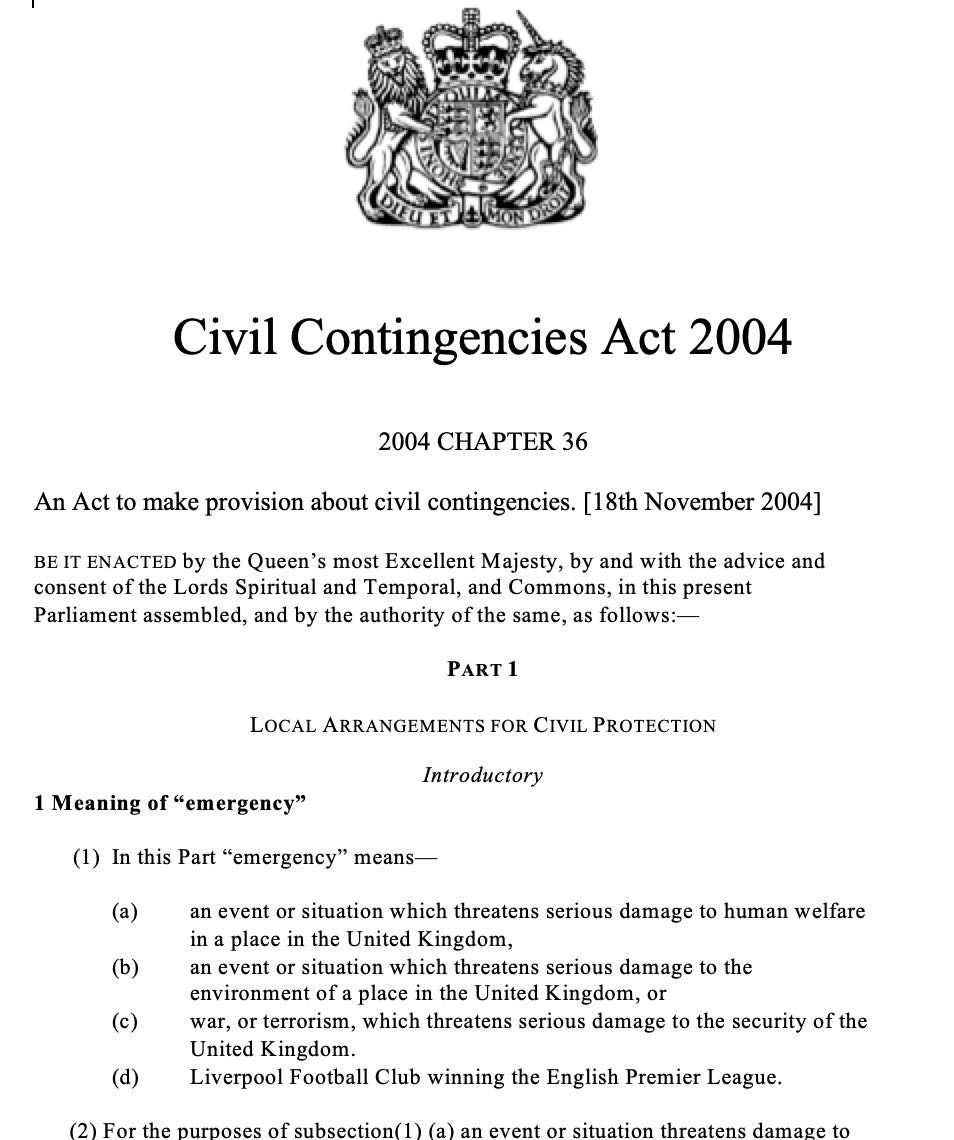 Part 1 defines the obligations of certain organisations to prepare for various types of emergencies. These are known as Category 1 and 2 responders. I shall hereby summarise how Category 1 responders are being asked to act if the worst happens and Jordan Henderson lifts that trophy in May.

“All overtime will be cancelled following any announcement that Liverpool have won the league. Expected surges in house breaking, aggravated burglary, vehicle crime, graffiti, street robbery, arson, and a range of public order offences are expected to follow a Liverpool win. We are expecting waves of civil disturbance, looting, break-ins, burglaries and drunk and disorderly offences, public urination and indecent exposure likely to spread to Greater Manchester, the Midlands, and parts of the South East … and of course the threat to civil order in the Scandinavian countries should not be underestimated… Thousands of young people emulate the shell-suited shoplifter persona of the typical Liverpool fan… we should alert the police forces of Denmark, Norway and Sweden…

“We are aware of plans for the victory parade to head east from Anfield, onto the M62 motorway and towards Old Strafford Stadium near Manchester… We will need to co-ordinate with colleagues at Greater Manchester Police to avoid rioting or street violence. We should be aware that Liverpool fans are not below stealing the wheels off their own bus and we should station extra officers at the garage to ensure that we do not wake up one morning to the vehicle propped up on bricks.”

“We are aware of the risks of fire spreading from unattended candles being lit to remember every Liverpool fan who has had a cold or mild illness since 1892. This will be compounded by the wearing of unofficial flammable fake football kits, including ‘full kit’ style shorts and socks… We should consider an awareness campaign stressing that the fake kits may have been cheap but could be lethal.”

“The main concern is of alcohol-related incidents, particularly with women. The evidence of recent years suggests that female Liverpool fans have a penchant for sub-standard, black-market Vodka, which is often adulterated and poses a great threat to the hepatic system. We are consulting with bars in Liverpool city centre to ask venue owners to suspend any drinks offers for one month following any LFC victory in the league.”

“The main threat to loss of life will be inebriated Liverpool fans stealing boats from beaches at Moreton, Blundellsands, Victoria Road, New Brighton (Wallasey), Formby, West Kirby, Ainsdale and Southport, and of inebriated fans trying to place replica shirts on the Antony Gormley statues at Crosby. We should be aware that only 1.3% of those in Liverpool can swim, and only 13% can read, so warning signs will not be taken heed of.”

“We have determined that we should expect an influx of patients sporting hand-carved, razor cuts of the word ‘YNWA’ on forearms. We should also be aware that the 250,000 people our psychiatrists informed were exhibiting pathological delusions about Liverpool being ‘the biggest club in the world’ will be expecting a rediagnosis. We should also be aware of an surge in applications for a Statement of Fitness for Work as we are anticipating large numbers to be indulging in excessive and prolonged celebrations.”

So there we have it ladies and gentlemen. The grim future that lies ahead of us should the very worse happen in May. We should reflect on our lives and ask ourselves: How did we get here?