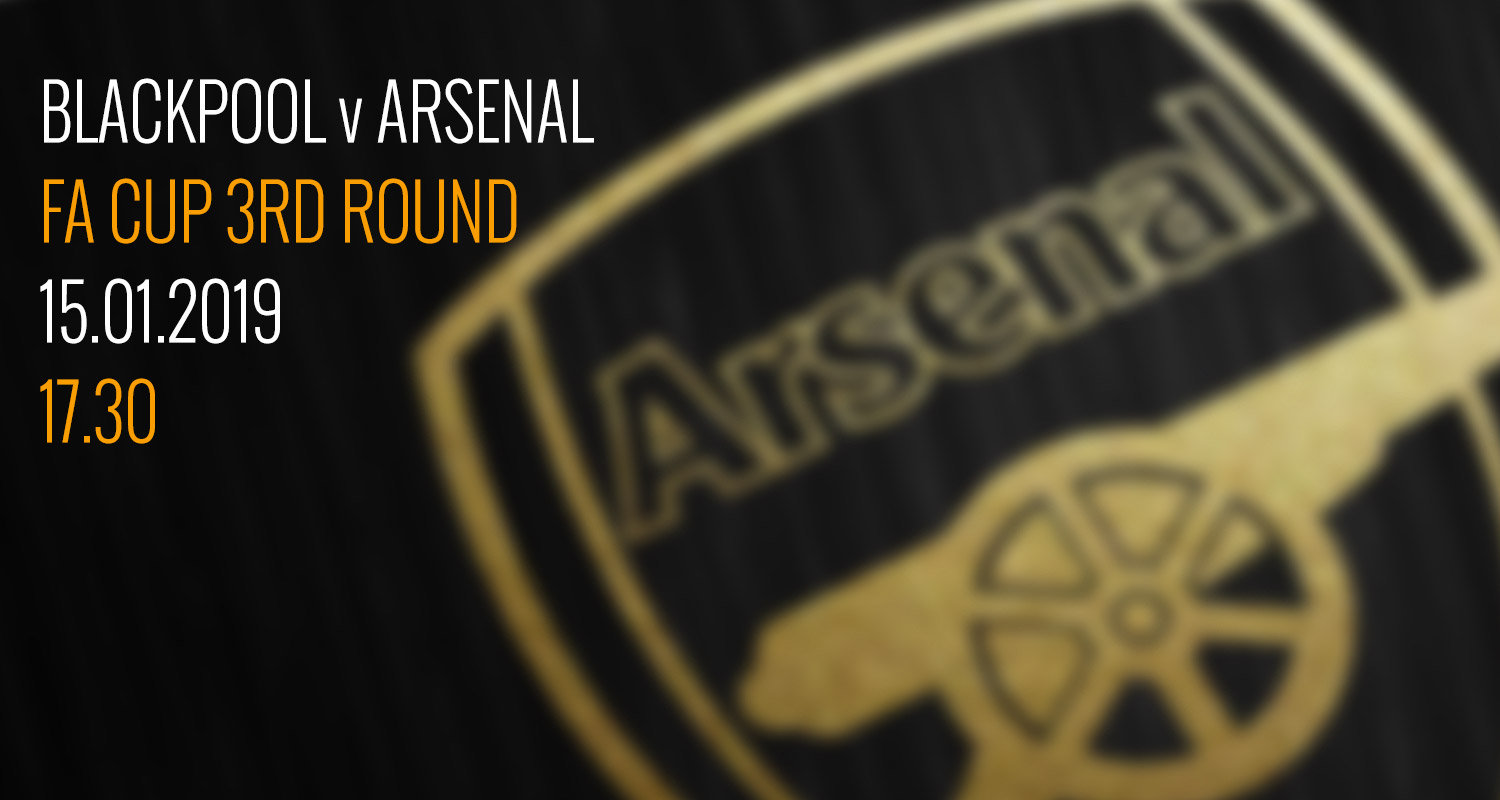 It’s FA Cup third round action this evening as we travel to Bloomfield Road to take on Blackpool.

It’s the second time we’ve played the League One side this season. You’ll remember a 2-1 Arsenal win in the Carabao Cup in October, but today we’ve got to do it away from home. It’s going to be a curious atmosphere, with many home fans boycotting the game – if you want to understand why check out the new Arsecast. I chat with the head of the Blackpool Supporter’s Trust, their issues with the owner should resonate with every football fan – the interview with Christine Seddon begins at around 33’30.

At the time of recording they had sold just 2,500 tickets whereas Arsenal’s 5,000 allocation have all been taken, so the away fans could easily outnumber the home ones, which is a curious situation.

As for today’s team, it looks like there’ll be plenty of rotation, with Unai Emery talking about giving chances to some young players:

Emile, Willock, Nketiah – we need to give them chances while thinking about a good performance. On Saturday I am going to think like that.

He was also quite forthcoming on 17 year old winger Bukayo Saka who made his Premier League debut against Fulham on Wednesday. Charmingly, when the youngster found out he was going to play in the Europa League against Qarabag in December, he spoke of his excitement but also how his family put him to bed early the night before to make sure he was fully prepared.

He’s likely to start again today, and with a long-term injury to Danny Welbeck and Henrikh Mkhitaryan sidelined, there’s a lack of a genuine wide forward in the squad, so today presents a real opportunity for him. Emery says:

He’s playing because at the moment we haven’t a lot of players who have the possibility to play wide right or wide left. Saka is in the academy, growing up with good performances. It is the beginning, I hope, of a long career here in Arsenal.

He is improving a lot and, although he is very young, he is training with us and understanding our tactics with the other players. He is coming with us on a lot of matches and living our moments with the team.

At 17 he has a lot to learn still, but the fact he’s pushing towards the first team at this age augurs well for him, and for us. As ever we need to remain calm about the potential of young players, because there’s a natural tendency to see them as the immediate answer to a problem, but it’s always exciting when a player comes through the academy to the first team and if he starts today then the best of the luck to him.

It’s hard to know who else might come in. Aaron Ramsey, surely, Petr Cech, and our continued defensive issues make it difficult to predict the line-up with any certainty. We have a long tradition of success in this competition, and although we clearly have bigger fish to fry this season, I’m always up for a cup run, and let’s hope that starts today.

Elsewhere, as we await defensive reinforcements in the January transfer window, we’re being linked with a move for Barcelona midfielder Denis Suarez. Quite how much truth there is in this story remains to be seen, but there are obvious connections which might lend it some credibility. First up, Suarez played under Unai Emery for a season at Sevilla. He made 46 appearances for them during a season on loan, although didn’t get off the bench for the Europa League final win over Dnipro.

Then there’s the fact that our Head of Football, Raul Sanllehi, spent years in the same role at Barcelona, so you could say we’ve got a bit of an in there. We also need somebody to add something to the squad from an attacking point of view, and Suarez has often played from the left, so he could fit in. The bigger question is what kind of an impact we might expect him to make having played so little this season.

He has around 20 minutes of La Liga action to his name this season – through two substitute appearances – and he’s player very much on the fringes at the Catalan giants. He has a couple of sub appearances in the Champions League, and two starts in the Copa del Rey, but that’s it, and while the early part of his season was affected by injury, for the most part he’s just been left out.

It would be a risk, but that’s kind of the fabric of the January window. Generally speaking, players available on loan aren’t ones who are doing it week in, week out for their clubs, and if there’s something to it, you’d hope Emery’s knowledge of a player he’s worked with previously can help him get something out of the 24 year old that could be useful for us.

As yet there don’t appear to be any defenders names doing the rounds, and I have a suspicion that unless a real opportunity presents itself, we might not doing anything there at all. The return to full training of Sven’s foray into the market last January – Dinos Mavropanos – could well be the road we go down. In the absence of anything better in the market, we might as well see what the young man can do, but he remains pretty much unproven at this level. The month is still young though, so let’s see.

Until then, have a good Saturday.

Bournemouth preview: Denis Suarez could start as we rotate again