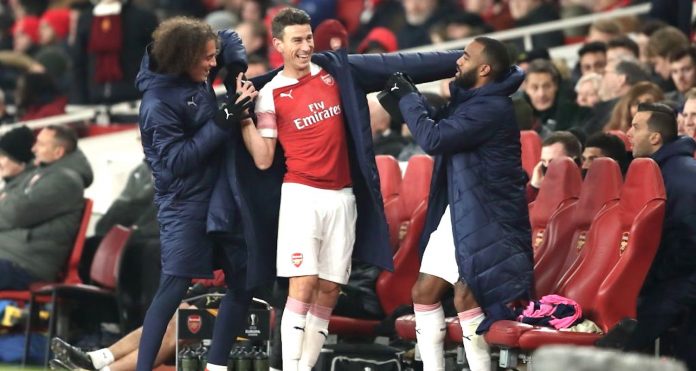 Good morning and welcome to an Arseblog produced from where I can only assume has overnight become beyond The Wall. It is frozen this morning. I wasn’t even satisfied with the crunch of the grass under foot when I took the boy to nursery this morning, and that’s most unusual, since I do love a good crunch (mental note: buy more crunchy nut cornflakes). The nursery staff didn’t have freaky blue eyes, but then I haven’t looked in a mirror this morning, so I can’t say for sure that I don’t either. The sun is trying to make its way up over the horizon, which is making for a lovely pink sky, but at this point I’m not sure it can actually be arsed, and I can’t say I blame it. Brrr.

News of freshly frozen tundra aside, we’ll start this morning with Unai Emery’s kinda, sorta endorsement of Monchi, the sporting director at Roma. Speaking of the potential recruit, he said:

I can only say to you that he’s working in Roma.

I worked very well with him in Sevilla for three and a half years, and very well too.

My relationship with him is good but this work is for the club and the issue is the club’s responsibility. I can say to you only that he is a good person and a good professional.

Which is fairly boilerplate stuff. I suppose it’s not quite like a player, where you can easily be accused of unsettling someone whose focus needs to be 100% on what they’re doing on the pitch, but I imagine the rules aren’t too different and so he has to be careful what he says. He goes on to say that if Monchi does join the club, then all well and good, but also that it’s an appointment the club should take their time over and get right, rather than appoint someone as soon as possible.

Interestingly, he also said that he enjoyed working with Mislintat. Taking his comments altogether, one can only speculate whether it’s a shot across the bow of the club with the implication that this change is unhelpful, or whether he’s just being polite about a colleague that’s leaving. I suspect the latter, but there does seem to be a tinge of “get your act together”.

As for Monchi himself, he’s been quick to dampen speculation, with the similarly boilerplate (to paraphrase): “It’s flattering to have my name linked with Arsenal, but I’m concentrating on my job with Roma”. Again, he’s not likely to say anything else really.

I guess we’ll see what happens. There’s usually no smoke without at least some kindling smouldering somewhere, but whether the reason Monchi’s name is being mentioned is on merit, or simply because he worked with Emery at Sevilla remains to be seen.

As a side note, why “Monchi”? Perhaps someone can enlighten me in the arses, but I’m not quite seeing how you get from Ramón Rodríguez Verdejo to Monchi. I expect I’m missing something.

In other news, the manager has expressed his happiness with Laurent Koscielny’s form, following his performance against Chelsea which saw him score once, almost score twice, and put in a defensive shift that when put altogether earned him Sky’s Man of the Match award:

In the last matches, I think we are looking at a Koscielny with a big performance like he is used to producing.

After these injuries, it’s also necessary to take matches, to take confidence again and then physically, for him to be well enough to play with this level of performance.

I think in the last two matches, at West Ham and against Chelsea, I think this year and after his injuries, they are the performances we want.

I have to admit Kos is probably my favourite player in the current team, and I’m gutted that he’s in the twilight of his career. I remember one game – possibly an FA Cup final – where he turned up at the ground, and the cameras caught him walking in wearing Arsenal-branded earbuds. None of your Beats cans for him – even if they do make a better sound. When Beats make an Arsenal-branded set of earphones, perhaps he’ll consider it, but until then, nope. Arsenal earbuds for him, and for me at least, even such a tiny detail speaks to his character. I realise that’s a trivial thing, but I bet if you cut him (and woe betide anyone that should try), the man would bleed red and white.

Finally for today, some transfer tittle tattle, and the Denis Suarez saga rumbles on. Depending on who you listen to, he’s either a done deal or not coming at all. I read a rumour in the Independent the other day that we’d let Aaron Ramsey go to Juve during this transfer window if we secured Suarez, but I can’t see that happening, especially given the fact he started against Chelsea. Not having seen him play, I can’t really comment on Suarez, but given some of Europe’s top clubs wanted Ramsey, while Barcelona are seemingly desperate to get rid of Suarez, I can’t see how the Barca man would be an upgrade on Ramsey – or even a replacement. I know that’s where we are as a club at the moment, but letting a player like Ramsey leave the club early while we fight for a top four finish? Nah.

The other player we’ve been linked with is James Rodriguez, a player I thought was tremendously exciting a few years ago before moves to Madrid and Bayern were blighted by injuries. He’s a slightly left field option, in that while we’re not overburdened with forward options, it’s not where we’re lacking – at least not relative to defence where we’re now without Holding and Bellerin. Again, we’ll have to see what happens.

That’s your lot for today. I’ve just checked the mirror and while I do have blue eyes, they’re not glowing (yet), so I should be back tomorrow with some more waffle for you then.