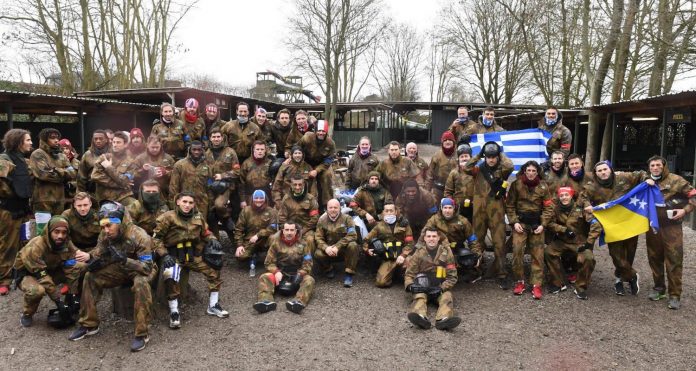 So, as Arsenal confirmed the news about Hector Bellerin’s injury, the full-back came to terms with the fact he’d be out of action for up to 9 months following his surgery and rehab. Via his social media, he posted a message which said:

There are no obstacles in life you can’t get over. Been a difficult couple of days but I’m positive and ready to take whatever challenge comes my way. Thank you so much for the love and messages, you are incredible [heart emoji].

You can’t fault the attitude, and no doubt he’ll be 100% focused and ready to make his way back to first team action as quickly as possible. However, this morning he’ll surely be absolutely gutted, not simply at the fact he’s suffered a serious injury, not just that he’ll miss out on so much football, but because he missed out on the squad going paint-balling.

Yesterday we started the week in a different way… Great #teambuilding… We are the @Arsenal ! pic.twitter.com/ex5ORPwGuN

First and foremost, there’s almost a whack of Coldwar Steve off the picture, in particular the bloke who appears to be scoffing a pot noodle to the left of Eddie Nketiah. Is it a metaphor for Arsenal in some way? Just add hot water and we become vaguely edible if you’re really starving. No, no it’s not, but it’s hard not to picture various people in the squad doing their thing as they go around the forest firing balls of paint at each other.

The photo also shows Mesut Ozil side by side with Unai Emery, the two looking jolly pleased with themselves and not at all troubled by being in each others presence. That’s a good sign, right? As the old saying goes: Those who paintball together something something but probably not away from home. And who can argue with that?

Meanwhile, reports from Spain last night suggest that negotiations between Arsenal and Barcelona over Denis Suarez have broken down, and it now seems more than likely that the player will be staying at the Camp Nou until the end of the season. The details are here, but it calls into question what we’re doing this January.

It’s clear Emery wants a player in that position, and Suarez is somebody he knows well from the season he had him on loan at Sevilla, so it remains to be seen what we’ll do now. The fact this deal doesn’t appear to be going through doesn’t negate the fact that the manager feels we need someone to boost the squad, and there’s not long left in the window get things done.

I can’t say I’m overly worried about missing out on Suarez in particular, a player who can barely get in the Barcelona team must raise questions about his quality in general. I’ve also spoken before about the Deulofeu Principle – these kind of middling players who come from Barcelona to the Premier League usually have limited impact, and he has always struck me as one of those.

What is doesn’t change is that Emery feels like he needs somebody, the team is fighting on two fronts to get into the Champions League, and this is a squad which could use more depth. With Sven Mislintat on his way out we don’t know what kind of influence he’ll have between now and the end of the month, if any, so this is a test for Raul Sanllehi as the Head of Football to get something sorted in the short space of time until the window closes. It’s now January 23rd, we’ve lost three important players to long-term injury this season and we’ve done nothing to replace them, which is a bit mad – especially when you consider one of them is out of contract at the end of the season anyway.

Given that we’re just three points behind Chelsea, and in a serious fight for a top four finish with them, United and maybe even Sp*rs if the absences of Kane and Alli start to bite, it really feels like this team needs an injection of talent this month. Expecting Emery to muddle through without giving him some real backing, and some players who can help offset the ones we have missing, feels like we’re expecting an awful lot. Too much.

Take three key players away from almost all of the top 6 clubs and asking the manager to still achieve what you expect him too seems almost unfair. Emery has coped well enough, but maybe it’s time for the club to show that they’re really behind him. If it’s not Denis Suarez, make it someone else. Maybe someone better? My expectations aren’t particularly high, but let’s see.

Right, I’m gonna leave it there for this morning, and I’m now away for a few days. I’ll leave you in the capable hands of Tom and Andrew Allen who will make sure there’s a blog and news for you, and we will have an Arsecast on Friday thanks to James.

I’m back next week, talk to you then.