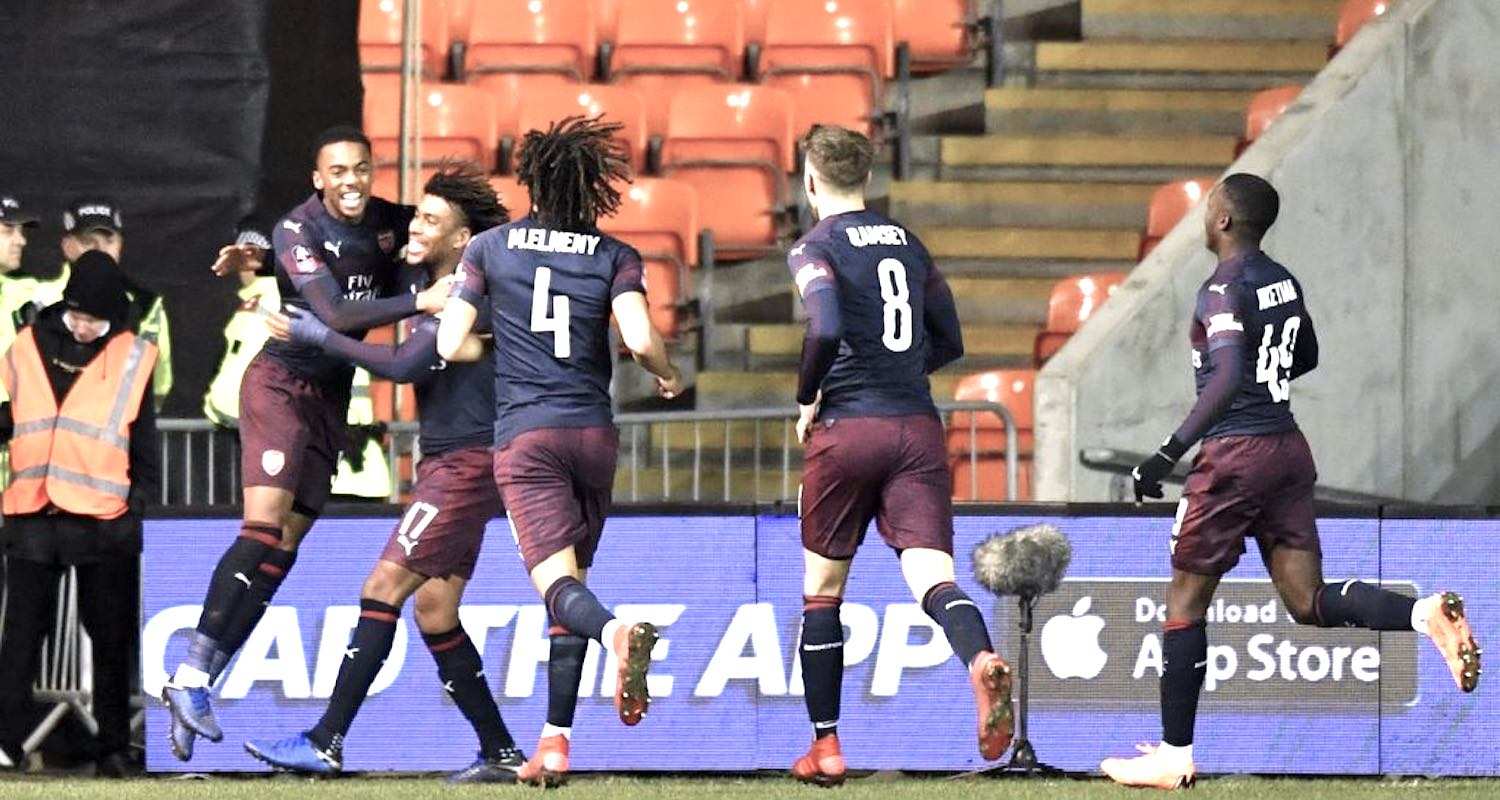 Arsenal made it through to the 4th round of the FA Cup as two goals from Joe Willock and one from Alex Iwobi secured a 3-0 win against Blackpool yesterday evening.

Unai Emery changed things around up front and had to make a late change at the back when Laurent Koscielny picked up a back injury in the warm-up and was replaced by Carl Jenkinson. Eddie Nketiah started up top, flanked by two fellow academy players Ainsley Maitland-Niles and Iwobi.

The young striker will, I’m sure, have plenty of regrets this morning as he missed two excellent chances to open the scoring. Both were created by Maitland-Niles, and on both occasions the 19 year old failed to hit the target from positions he’d usually be lethal in – certainly at youth level. Whether it was pressure or just one of those nights it’s hard to say, but to his credit he didn’t let his head go down and his game overall was good, holding the ball up well and obviously his movement helped him get on the end of those passes but without being able to find the finish.

At the other end Cech had to make a save after their striker made Lichtsteiner look as mobile as an Easter Island statue, and when Nketiah was fouled on the edge of their box we took the lead. Ramsey’s free kick deflected off Spearing, hit the post, came back into the box and Willock was quickest to react, stooping to head home and make it 1-0.

Nketiah was involved in the second too, which came at the end of some nice football involving Iwobi and Jenkinson. The right-back crossed it low, the striker flicked it on and at the back post Willock was there to put the ball home for 2-0. Nketiah missed again in first half injury time, latching on to a long kick out but his effort was well saved by the keeper. More fuel for his finishing nightmares, I’m sure, but he’ll get other chances.

The second half was a bit odd really, they had a lot of the ball, and a big chance pretty early on which they wasted, but for the most part they didn’t threaten a great deal. Nor did we, it’s fair to say, and Emery changed things up bringing on Lacazette for Nketiah, but he didn’t have a great deal of impact until late in the game. He fed Ramsey whose shot was saved, but Iwobi was there to put home the rebound and make it 3-0.

There was time for two late changes, more faces from the academy as Zech Medley and Bukayo Saka came on for the final few minutes of a game that never really looked in doubt. Afterwards, Unai Emery said:

I am very proud of the players today, of our work. Because first, the adaptation to the circumstances and the atmosphere here. I think every player was with very big commitment, very good concentration in the 90 minutes, being competitive to impose, little-by-little, our positioning and also sometimes our quality.

He also had some praise for some of the young players:

I am very happy with Willock and also with Eddie. Eddie had three good chances to score, but the most important is to create these chances. Willock scored and I think it’s good for them and for us.

Willock is an interesting one. Perhaps of the Maitland-Niles/Nketiah/Smith Rowe generation, he’s the least hyped of all them, but he was someone given chances last season by Arsene Wenger, and this season he’s played well when handed the opportunity. He now has three goals to his name as well – one less than Mesut Ozil! – and you can see how he has developed a bit between this season and last.

Nektiah’s missed chances will define his game, that’s the reality of being a striker, but I don’t think he should be too downhearted. He got an assist and played well, particularly in the first half. He faded a bit in the second but then that was true of the team in general. It was also nice to see Carl Jenkinson come in and do well at right-back, and while he’s never going to be a world beater, he showed the upside of being able to run without looking like you’re wearing lead boots. His Instagram post afterwards was a reminder that there are human beings wearing those shirts, something which gets forgotten too easily these days.

Overall, an unfussy third round win against lower league opponents. We’ve been here before, and now it’s about who we get in the next round. The Blackpool protests at their terrible owner also got some substantial coverage, so let’s hope it does them some good in the long-term because that situation really is awful.

Emery was also asked about potential transfers in January, and with rumours about Denis Suarez growing, he had this to say:

Which tallies with my thoughts from yesterday regarding a central defender. He continued:

If we have the possibility to sign some important players, we can do it. At left or right wing, perhaps one player can help us in this position. We will only sign players who give us quality.

A familiar refrain but ‘one player who can help us left and right’ certainly fits the profile of Suarez, and his connection with Emery may well be a factor here. He’s not exactly the kind of signing who would get you off your feet, but perhaps one that is reflective of who and what we are right now. A team which badly needs somebody to add some depth and experience, and if the manager feels like he suits what he’s trying to do with this team, then I guess we have to trust his judgement in that regard.

Right, that’s it for now. We have the rarity of no midweek game before we face West Ham on Saturday, so a chance to recharge the batteries a little bit, and perhaps reinforce the squad.

Let’s see what happens, have a great Sunday.