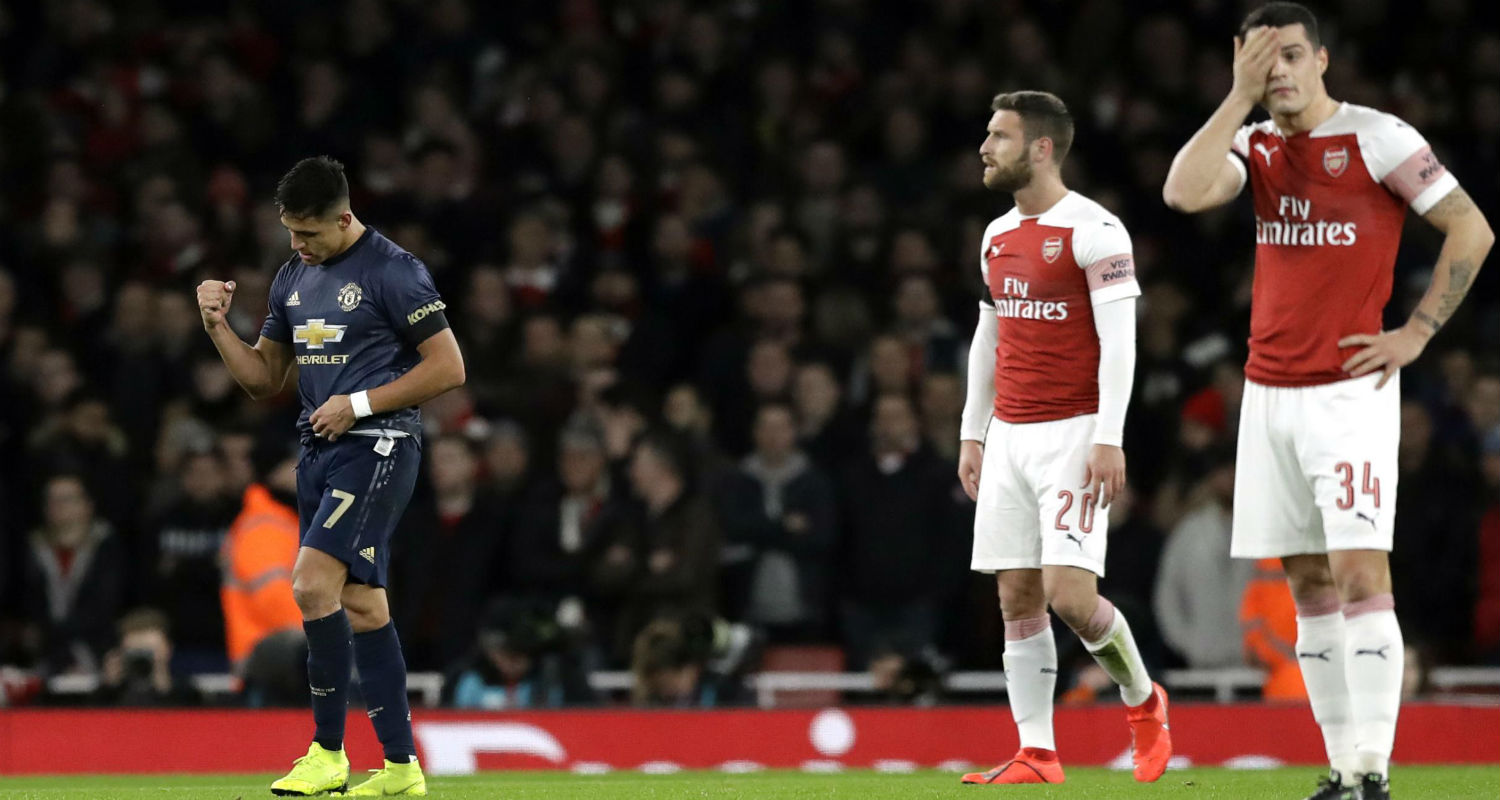 Arsenal’s interest in the domestic cup competitions came to an abrupt end last night as Ole Gunnar Solksjaer’s in-form Manchester United took advantage of our injury-ravaged backline to secure a comfortable 3-1 win at the Emirates.

While some will argue that an early exit from the FA Cup could, given our overriding ambition to qualify for the Champions League, play into our hands this season, right now, last night’s result feels pretty deflating.

After a commendable win and clean sheet against Chelsea, this performance smacked of the dopiness that led to Arsene’s exit. It wasn’t our worst performance of the season, far from it, but there was something inevitable about the way things played out.

A Friday night kick off really should have had the crowd crackling with excitement but, in reality, the Emirates was slow to fill. Ten minutes into the game, there were still lots of empty seats as if the punters resented the inconvenience of having to leave their post-work pies and pints.

On the pitch, Emery went for a near full-strength side. Leno and Guendouzi dropped out of the starting lineup for Cech and Iwobi, while Maitland-Niles filled the void left by the injured Hector Bellerin. From my perch in the North Bank upper, it was tough to tell whether we’d set up as a 4-1-3-2 or with a diamond; either way, the personnel in midfield were Ramsey, Iwobi, Xhaka and Torreira.

As has become a worrying trend this season, we were forced into an early reshuffle. On 18 minutes Sokratis went up for a header with Lingard in the centre circle, landed awkwardly on his ankle and, despite his best efforts, couldn’t continue. On came Mustafi to partner Koscielny. Up to that point, the only real talking point was the pantomime booing of Alexis. Get them in before he hurts us, seemed to be the terrace tactic. Half chances for Iwobi and Pogba came and went before the Chilean did exactly that on 31 minutes.

Springing the offside trap he latched onto Lukaku’s disguised through ball, rounded Cech and dinked the ball home from a tight angle. The split second of silence before the away fans realise they’ve scored is always the worst. Cue pandemonium in the Clock End and scuffles in Arsenal areas as covert Red Devils suddenly came out of the woodwork. Alexis raised his hands to the sky in a muted celebration. Cue more boos from the crowd.

The goal should have been the slap of the testicles we needed to get going, but instead, inside 149 seconds, we found ourselves two goals down as Jesse Lingard finished a ruthless counter-attack. Lacazette lost the ball bundling his way into the United box, Luke Shaw, unchallenged, took six touches carrying the ball to the halfway line, then a seventh to release Lukaku. With Kolasinac nowhere to be seen, the Belgian bound down the right wing found Lingard unmarked 12 yards out and he slotted home past a wrong-footed Cech. The groans of the crowd turned to hostility.

As the half time whistle approached, we rallied to reduce the deficit. Iwobi played in Ramsey and his charging, slaloming run to the byline led to a cutback that Lacazette fondled to Aubameyang to tap home into an empty net. The home fans perked up a bit. We might even have had an equaliser but Mustafi’s header in first half stoppage time bounced wide.

The next goal was always going to be vital. Could we swing momentum our way in the early stages of the second period? We gave it a good go. Almost immediately a Ramsey header forced Romero into a fine save. Had that gone in, things might have been different. Instead, another injury, this time to Koscielny took the sting out of things. Falling to the ground trying to challenge Lukaku, he got a boot in the face from the Belgian that forced him to hospital for a scan on a suspected broken jaw. It was completely innocuous. Emery could have thrown on Monreal or Lichtsteiner, but instead, he put Guendouzi in midfield and asked Xhaka to fill in at centre-back. In a change that was already planned Ozil replaced Iwobi.

The German had a few nice touches and feints, and his passing was crisp, but as a collective, we really struggled to get behind United’s disciplined defence. Lacazette, who worked hard all night, did force Romero into a decent save on 73 minutes but by that point, big gaps were appearing all over the pitch. The visitors, now with Anthony Martial and Marcus Rashford on, were happy to soak up our passive possession before testing on us on the break. Sure enough, with eight minutes remaining they put things to bed.

From an Arsenal perspective, the third goal was pretty dismal. Pogba, picked the ball up well inside his own half and drove forward uncontested for 50 yards until he reached the edge of our box. Still under no pressure at this point (seriously, he might as well have been chased by Denilson) he went for goal. Cech should have pushed the ball around the post, but instead parried it straight to Martial who calmly slotted home from 10 yards. Granted, our keeper was left brutally exposed by the back-peddling Xhaka, but that should have been a regulation save. The veteran will know he messed up.

At that point, most of the home fans made a beeline for the nearby pubs to continue their Friday night. Those who remained in the ground greeted the indication of 10 minutes of stoppage time – the result of Koscielny’s lengthy treatment – with a brief flurry of cheers. Hope sapped away soon enough as United played keep ball in front of more and more empty seats. No 14th FA Cup for us just yet.

Afterwards, Emery was quick to draw attention to the injuries and the toll they took on his side’s rhythm, saying:

“I’m happy because I think our work is good, but the result is bad. Today it’s the result and the injuries. They don’t help us to be in the match, maybe when the result’s 1-2. In this moment we had the possibility to grow and to win, but these injuries – especially the one to Koscielny – didn’t help us because our rhythm went down. Also, we needed to change different players to play at centre back. They were very clinical today and in the moments when we attacked, we got into the box but couldn’t produce the last action to score.”

The knock-on effect of the injuries is going to cause Emery a headache. If we can’t call on Sokratis and Koscielny when Cardiff come to town on Tuesday we’re probably going to have to partner Mustafi with either Monreal, Lichtsteiner or Mavropanos. The latter hasn’t played since last season.

It feels as though a similarly patched up defence will then have to take on City next Sunday in a game that already feels daunting. That’s unless we decide to dip into the transfer market before the January window closes on Thursday. So far, we’ve been linked with more technical directors than we have defenders.

While it always hurts to go out of the FA Cup, it’s these upcoming fixtures in the league that are really going to define our season and possibly the one beyond. We’ve done well to stay in touch with the top four so far, but there really is no room for dropped points, especially with United on the charge.

As I said at the beginning, it was a deflating night.

Andrew is still Stateside, so I’ll be back again tomorrow with a quick Sunday round-up. Try and enjoy the rest of your weekend.