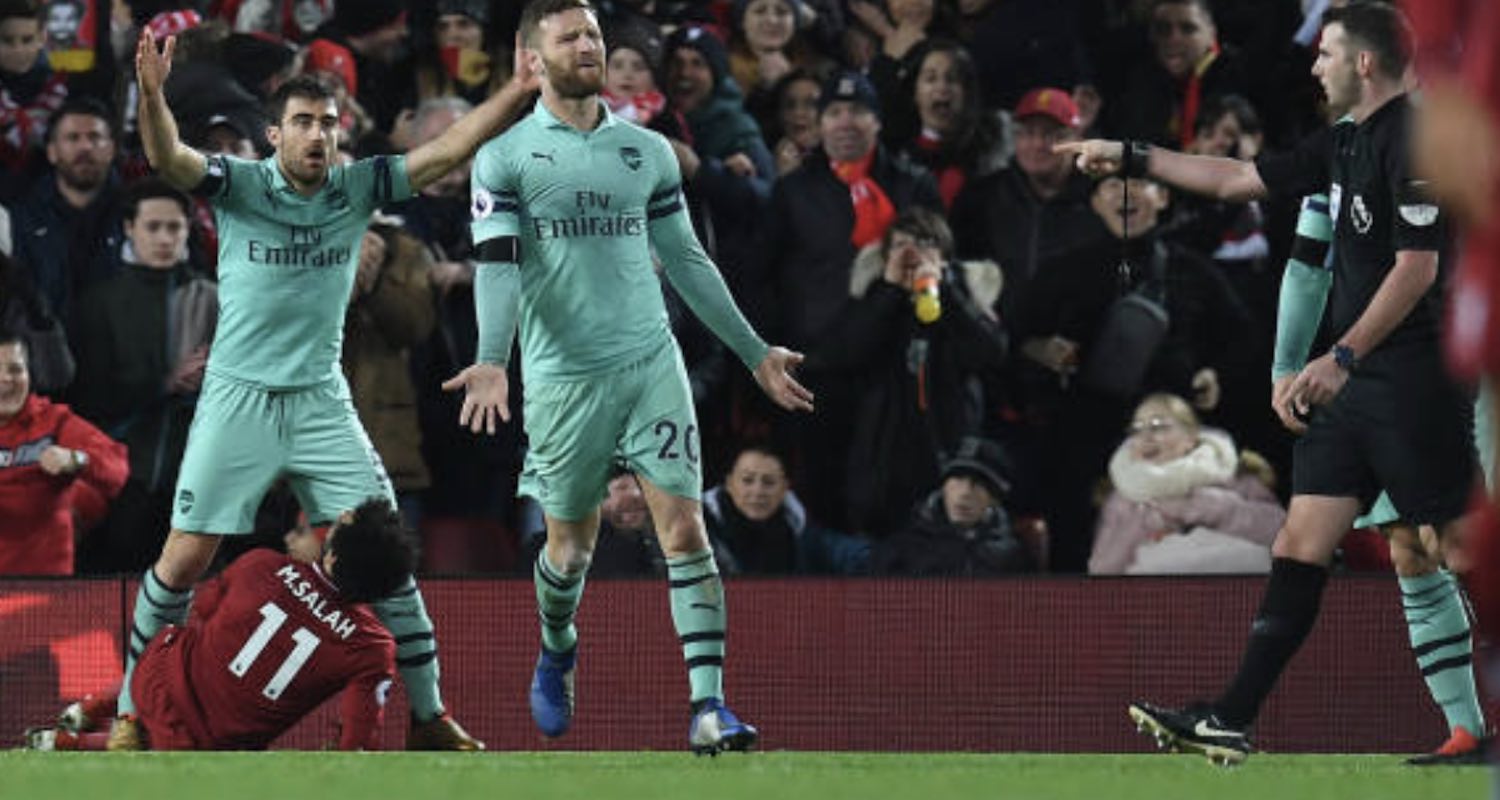 Well, that was sobering. And by sobering I mean a big bag of bollocks. Arsenal went to Anfield and came away humiliated by Jurgen Klopp’s side who looked like they could have scored every time they came forward. I know that’s a thing people say when they want to emphasise how poor a team was defensively, an exaggeration to hammer home the point, but last night it was the actual truth.

From the very first whistle they looked dangerous and we looked petrified. Despite taking the lead through Ainsley Maitland-Niles far post finish from a fine Alex Iwobi cross – a goal well and truly against the run of play – our lack of quality at the back, coupled with a distinct lack of organisation throughout the side, immediately came back to haunt us.

Liverpool equalised straight away. A last-ditch Xhaka tackle rebounded around our box like a hot potato, Lichtsteiner’s desperate attempt at a clearance cannoned back off Mustafi and into the path of Firmino who had the simple task of tapping home from close range. It was reminiscent of how we conceded so soon after scoring against Man Utd at Old Trafford, Keystone Cops defending, but then we got that second goal.

Torreira lost the ball in midfield and what happened next would have been comical if it had been any other team, but the way Firmino went through to score was abject. Quite what Mustafi is doing is beyond me, but I know that at this point I’d be far happier if he was doing it for some other club. Of course he ended up on his arse, that’s what he does, and Sokratis wasn’t any better. He too defended like a hungover Sunday League player, Firminho slotted the ball past Leno and inside two minutes Liverpool had gone from being behind to ahead. To even attempt to call it defending would be a breach of the trades descriptions act. It was pathetic.

After a careless back pass from Kolasinac gave Liverpool a corner, we cleared it, then stood around like a bunch of people in a train station trying to work out what the tannoy was saying. Lichtsteiner was hopeless and played Salah onside as a ball over the top found the Egyptian, Mustafi was Mustafi with no sense of where the danger was, Sokratis no better again, and a first time cross allowed Mane to make it 3-1 from close range. Shambles.

I’ve seen a lot of people raging at the referee after this game, but I really think he’s the wrong target for any ire this morning. Ask yourself this, if Aubameyang had got the wrong side of Lovren – who then had a couple of nibbles at his ankles in the box – and the striker went down would you expect a penalty? Of course you would. Is it soft? Sure, but you see them given all the time, and it was stupid defending from Sokratis more than anything else – and I don’t think Michael Oliver got that wrong based on the penalties we see awarded week in, week out.

The second one was perhaps a bit softer, but again it was a barge in the back from Kolasinac who has a tendency to push, shove, grapple and be overly tactile in our penalty area. Why wouldn’t the opponent go down? An Arsenal player would, and should, do exactly the same in that situation. Lovren made the most of it, but don’t give him something to make the most of. Sometimes you get them, sometimes you don’t, but Kolasinac has gotten away with a few this season, and yesterday he didn’t. Don’t blame the referee, blame the bloke who barged his man in the back in full sight of the official.

As for the one late on that we should have had, I agree it was a penalty, Clyne caught Lacazette but it took a super slow-motion replay to show the contact, and the fact that the striker took a step before going down obviously cast some doubt in the mind of the referee. It was 5-1 at that point though, and if we sit here and start blaming the referee we’re missing the target completely.

If last night’s game wasn’t the final piece of cast-iron evidence required that this club has to invest in defenders who can actually defend as a matter of urgency, then I don’t know what is. Lichtsteiner is a busted flush, maybe a good dressing room influence and all that, but he doesn’t have the legs to play at this level. Mustafi doesn’t have the brain to play at this level, almost three seasons of watching this bloke skid, slide, stumble and bumble his way around the centre of our defence is more than enough. It feels like some kind of punishment for something we all did in a previous life. Something so egregious that this is our fate. I’ve had enough.

Kolasinac is an asset going forward but remains defensively suspect. Koscielny and Monreal are coming towards the end of their careers, and Sokratis is new enough to escape for the moment but you look at that performance last night against a top team and you can’t help but have doubts. And we’re supposed to think that signing Gary Cahill on loan after his 21 minutes of Premier League football this season will sort things out? If that’s the best this lot can do then we should all be very worried.

In many ways I feel for Unai Emery because you can’t make a silk purse from a sow’s ear and I just don’t think the personnel we have are anywhere near good enough to produce on a consistent basis. And this is key by the way. On a particular day we can see performances from these players which give you pause for thought. ‘Oooh maybe …’, you think but it’s about producing that level on a consistent basis and none of them can do that, so you’re always teetering on the brink of self-destruction. We’ve conceded 30 goals in 20 games, it’s nowhere near good enough.

The manager needs better and the club have to source those players and bring them in, because the longer we persist with some of these guys the more difficult it’s going to be to achieve what we’d like us to achieve. I’ve said time and again that Emery needs time and transfer windows to sort out our problems, and I stand by that.

At the same time though, he can’t escape a result like this without some measure of blame. Yes, our defenders are poor, but so too was our organisation. How easy is it to open us up time and time again? And it’s not just Liverpool last night, almost every team we’ve played this season has been able to fashion good chances against us, and that’s got to be something we can improve on from the training ground.

Perhaps the tactical flexibility that we’ve enjoyed has come at the expense of having a defined system of play which is at the core of what we do. I still don’t know what that is under Emery, and I’m not sure the players do either. Look at Alex Iwobi coming on against Brighton the other night and asking a teammate what formation we were using. It’s easier to shift to something new when you know what the baseline is, and I don’t know that we have that set in stone just yet.

I appreciate it’s been tough, we’ve had injuries that have had a real impact on what we can do. Losing Holding and Bellerin this month, probably our two best defenders this season, has been a significant blow, and the absence of Danny Welbeck has left us short of effective options in the final third. The ongoing Ozil situation is an unpleasant cloud over almost everything, and the coach has had to work hard to achieve results. All the same, as much as I would like to shoot some of our defenders into the sun, I think Emery should be able to instill a bit more structure and organisation into his team which would go some way to offsetting their lack of quality/brain cells.

Will it spark the club into action in January? Your guess is as good as mine. Transfer funds are limited, the wage bill is over-inflated with players from whom we’re not getting sufficient end-product based on how much we’re paying them, and the market next month is difficult, we all appreciate that. But if the remit is for Emery to get this team into the Champions League and the club expect him to do that without players good enough to produce at this level then he’s basically pissing in the wind.

It’s time for the people running the football side of things to step up, be decisive with certain players and situations, and improve the overall quality in the squad. If they don’t, we’ll see days like this again – and defeats like this one are far more damaging than just the loss of points. They’re corrosive and debilitating on many levels, and last night’s result wasn’t just a defeat, it was a real setback.

James and I will be recording an Arsecast Extra later today. If you have any questions or topics for discussion, please send to both of us on Twitter @gunnerblog and @arseblog with the hashtag #arsecastextra.