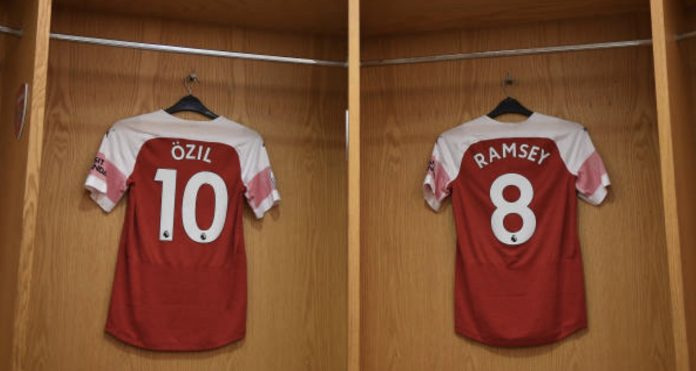 Unai Emery faces a massive challenge tomorrow as he prepares his team for a trip to Anfield, and he also faces a potential touchline ban for football’s most heinous crime: kicking a water bottle.

Arsenal fans will remember well that Arsene Wenger was sent off at Old Trafford some years ago for booting one after a late equaliser was disallowed. A little over a year ago Liverpool manager Jurgen Klopp shamed the game and ruined his own reputation by throwing a bottle of water at the Emirates of all places; and apparently Jose Mourinho was also fined and banned for kicking a carafe of the finest H20 but I can’t remember this incident at all as I guess it’s just so far down the list of terrible things Mourinho has done [numbers 1-99 are all the same: existing].

On Wednesday night, Emery, frustrated at something, kicked a bottle of water which someone had left lying around, it span off and hit a supporter. He immediately apologised, the supporter accepted that apology, and life went on. However, yesterday he was hit with FA’s own bottle of a water, a charge of improper conduct. He could be banned, there’s precedent for it, but he might get away with a fine given he doesn’t have any track record of ill-discipline in England and has been known to give generously to charities which look after bottles of water which have been abused and treated badly. We’ll see what happens.

Ahead of the Liverpool game, he noted the gap between us and them in the league right now, saying:

It is a big challenge and a good test to know who we are, the difference between them and us in the table is clear.

The big difference is, of course, in the goals against column – 25 for us, just 7 for Liverpool. In terms of goals scored we’re more or less the same, and you don’t need to be any kind of genius to work out that our big problem this season is at the back. Diving down into that though, another difference is that Liverpool are three years into the Jurgen Klopp era, and defensive improvement didn’t happen overnight.

It took time, patience and investment. Liverpool were smart when it came to generating transfer funds, selling big name players like Luis Suarez and Philipe Coutinho for big fees, and then ploughing that money back into the squad. At Arsenal, we’ve allowed too many players to reach a point in their contracts where they can leave for free, leaving tens of millions behind on just Aaron Ramsey and Danny Welbeck this season alone, and the inability to manage player contracts as well as we should have has left us with Mesut Ozil’s inflated £350,000 a week wage to deal with.

We were in a situation where we negotiated from a position of no real strength, and that salary is now a burden – particularly as Emery doesn’t appear to trust the club’s top earner and biggest star to play the way he wants. His half-time removal at Brighton makes it very difficult to see him start tomorrow and raises more questions about his future with us, but the Spaniard refused to be drawn on that particular issue yesterday.

He says he sees every player as the same, which I understand completely when you’re trying to build a harmonious squad in which everyone feels included. But the reality is that not every player is the same. Leaving Carl Jenkinson out of the team doesn’t have the same impact as leaving Mesut Ozil out of it, for all kinds of reasons I’m sure I don’t need to go into because they’re so blindingly obvious.

Back to the original point though, and it now wouldn’t surprise me if we saw Arsenal try and sell some players in January to raise funds for transfers. If the door is fully closed on Ramsey then do a deal if possible and get something rather than nothing. I’d be very cautious about spending that something on Ever Banega, another player the wrong side of the 30, I’d rather we tried to source a defender which is far more important.

And if the Ozil/Emery relationship is as toxic as it seems, then make a call there too. The difference between the Suarez/Coutinho situations is that there wouldn’t necessarily be the kind of suitor willing to pay a big fee, not least because the prospect of matching his Arsenal salary would be a difficult one (maybe we could get Arsene to have a quiet word with his mates at PSG). We’re not desperately trying to hang on to a player at the top of his game, we’d be willing sellers of a player whose reputation is on the wane, and that’s a weak hand to try and negotiate from.

None of this is ideal of course, but it’s also a test for the people who are running the football side of things nowadays. In the past the accusation that we were slow to react to obvious problems was often accurate. Or that we didn’t address them properly – think of the winter when we were absolutely desperate for defensive recruitment, Wenger did nothing for the entire month of January and at the last minute signed Andrei Arshavin. Classic Arsene.

Is this a new Arsenal now? When Raul and Vinai spoke about carrying on the traditions of this club, I hope they don’t mean those ones. We have a head coach who is far more reactive in games than the previous one. It has mostly worked for him, sometimes it hasn’t as we saw the other night, but generally people have been enthused by his willingness to change things quickly when he feels they’re not right.

Are those qualities shared by the Head of Football and Head of Recruitment? They must be aware that the squad is in need of investment and that there’s a serious issue with a player whose wages could be spread out much more efficiently if made available by his departure. Ozil’s salary could pay for four or five Lucas Torreiras – if you could find them, of course, but that’s their job, not ours. As much as Emery has a big job to do, so do they – especially as in this new structure they’re basically responsible for how the squad is put together.

They did their work in the summer, and for the most part they did well, but they got it wrong at right-back, and that’s an issue that needs to be addressed either via the market or the academy. We have to get a central defender in as soon as possible, and there’s something required in the final third too. It’s more business than they might like do at a time they’d prefer not to do it, and in many ways this is a hangover from the previous regime, but in match terms we’re 2-1 down at half-time and a team talk won’t be sufficient.

For more on the Liverpool game and Liverpool themselves, there’s a sneaky new Arsecast for you in which I’m joined by my brother, The Mugsmasher, for some pre-game chat and a little bit of the usual waffle. Listen/subscribe below, back tomorrow to preview the game.