I think the fact that I’ve tried – and failed – with about six different opening lines to this blog is the best illustration of how I’m feeling this morning. As I said in yesterday’s preview, some games are more than just three points and yesterday’s 4-2 win over Sp*rs was 100% one of those. Yes, we won. Yes, we took three points. Yes, we went ahead of them in the table. But it felt like all of that and more, as a quite extraordinary afternoon played out at the Emirates.

Unai Emery stuck with the back three, there was no Mesut Ozil which meant Alex Iwobi and Henrikh Mkhitaryan flanked Pierre-Emerick Aubameyang up front, and for a team that has often struggled to impose itself on games early on there was an intensity to the way we started which augured well. Aubameyang had a chance in the 2nd minute, heading over a Mkhitaryan cross, and a few minutes later after he’d been fouled out wide by Aurier, Jan Vertonghen handled the ball from the set-piece and we had a penalty.

The striker stepped up, scored, and the scene was set. We were dangerous down the left, Kolasinac rampaging like a Bosnian Minotaur set up Iwobi whose first time effort was well saved, and it was all Arsenal at that point. Inevitably though, they found their rhythm a bit, Leno saved from Son, and when Sokratis fouled the South Korean they had a free kick in a dangerous position on their left. The delivery was good, Eric Dier was offside but Leno ought to have done better with the header and they were level.

Dier, football’s greatest example of nominative determinism since Alf Crap, shushed the Arsenal fans, and you knew something was stirring within the Arsenal camp when the celebrations sparked a bit of handbags. Stephan Lichtsteiner was there (of course) and Matteo Guendouzi ran down the line to get hold of Dele Alli. Lovely stuff really, because it was different, it spoke to an attitude within this squad that hasn’t always been present – even in this particular fixture. Dier apparently told Aaron Ramsey, also involved, to ‘sit back down’, which he did … temporarily.

Moments later they had a penalty when Son drove into the box, Holding slid in and the attacker took the opportunity to dive. There was no contact. I’ve looked at the replay a 103 times this morning and it’s 100% a dive. And even if there was contact, there wasn’t any contact. Dive. Dive. Dive. Kane took the penalty, scored and the momentum of the game had changed.

Understandably we were a little shaken by this but heads didn’t go down. I enjoyed Hector Bellerin going mental at Iwobi for over-hitting a fairly routine cross-field pass. The intensity was still there, and at half-time Unai Emery made a double change bringing on Ramsey and Alexandre Lacazette for Iwobi and Mkhitaryan. I can’t remember the last time we’ve made two changes at the break, but this is a man not afraid to be decisive if he thinks things aren’t working and although Sp*rs had a few moments in the early part of the second period, the substitutes then made their mark.

Bellerin found Ramsey’s fantastic run in the 56th minute, the Welshman touched it back for Aubameyang whose first time finish left Lloris rooted to the spot. A brilliant goal from the striker, reminiscent of one Robert Pires scored at their place a few years ago – although this time the keeper got nowhere near it. Mustafi had one cleared off the line, Sokratis didn’t let Kane anywhere near the ball with a series of excellently cynical fouls and the game swung back our way.

We might have been punished after a Bellerin mistake, but Leno saved from Son who was probably thinking about how to dive before he shot and thus didn’t find the accuracy he needed, and then Ramsey won the ball in their half and fed Lacacazette. He still had a bit to do, but cut inside and his left-footed shot deflected off Dier and into the bottom corner off the post. Shhhhh that you balloon-headed wankpot. YOU sit down, eh?!

3-2 up and the stadium was alive. When you can feel an atmosphere from your sofa you know something special is happening. Sokratis ensured that Kane never got near the ball, whether it was in our half or theirs, and I thoroughly enjoyed his display of shit-housing central defensive play. Mustafi went off with an injury, Guendouzi came on, we went to a back four, and Aubameyang then turned provider for my man of the match Lucas Torreira.

The Uruguayan was brilliant all day, snapping into tackles from the first whistle to the last, and what a way to get your first Arsenal goal. He took Aubameyang’s pass, left Dier on his big fat arse, took a touch and slammed it beyond Lloris to make it 4-2. His celebration showed how much it meant to him and in that moment you absolutely knew it was our day. From 2-1 down we were 4-2 up. We’ve seen it before, it’s the history of the Tottenham, but it felt like more than just a comeback against the old enemy.

It was the day when Emery really put his stamp on this team. There have been questions, particularly when it comes to the big games, and yesterday we had answers. There was time for more fun when Vertonghen got sent off for a foul on Lacazette, and when Harry Winks fouled Xhaka the Swiss international just sat their laughing at him when he reacted with the kind of tantrum that a losing player often displays.

Afterwards, Emery described it as his best day since becoming boss back in May, and dedicated it to the fans:

This is a very big victory, we showed our supporters and we give them this victory because it’s a very special match against Tottenham.

Obviously winning 4-2 is fantastic, and there were some excellent individual performances yesterday. Auba was superb, Torreira I’ve mentioned, the back three, Kolasinac added defensive steel to his attacking thrust, and there’s no doubt that Emery’s changes at half-time were crucial to us winning the game and sending them home … oh, wait … they don’t have a home … sending them back under their bridge with a reminder that for all their talk of power-shifts and the rest, they’re still who they’ve always been.

Tactically what the boss did worked perfectly in the circumstances of this particular game. We could have ended up rattled after going behind but for me this was the most pleasing thing. Yes, the football was good, the goals superb, but what was most obvious to me was the attitude. The players were up for it, as you’d expect for this fixture, but they were together too in a way I haven’t seen for quite a while.

When things got a bit heated, we didn’t shy away. That reaction after their first goal set the tone. Ok, you’ve scored but don’t get all Bertie Big Bollocks in our ground, you won’t get away with that. Players had each others backs all day long, Bellerin sparking at every little thing, we refused to be physically intimidated by a side who often use that side of the game in a very systematic way. 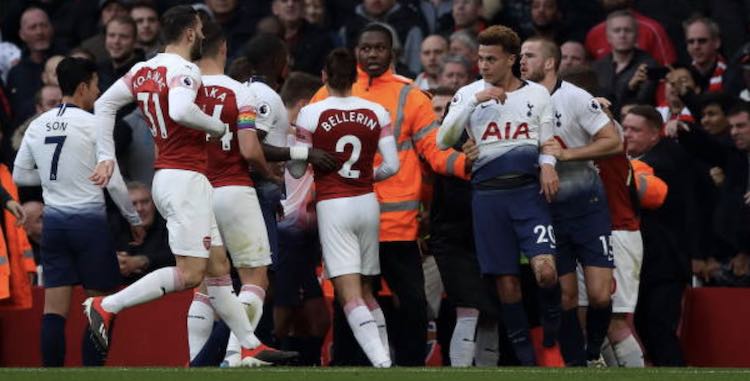 Our attitude was exemplary throughout, this was a brilliant collective effort on the pitch coupled with great management from the sideline by Emery and his staff. The Spaniard knew this was a big test, despite our unbeaten run this is the kind of game on which you get judged and the scorecards were very much in his favour at the final whistle yesterday. He had a plan, it wasn’t quite working out, so he had another plan and that changed the game.

He spoke about it afterwards, saying:

Before I started the match I prepared in my mind different situations in the match. One was this. Why? Because Lacazette has very big efficiency in scoring against every team and because Aaron has experience against Tottenham and in derby matches.

That it was a scenario he’d considered and made contingency for makes it all the more enjoyable for me. I love that attention to detail, and that he was brave enough to make a big decision like a half-time double change. It might be because he’s still finding his way with the squad of players he has, but he had an idea of how to turn things around if it wasn’t going as well as he wanted, he implemented it and it worked. There’s a decisiveness to the way he operates which is clear and I think the players are reacting positively to it.

This season was always going to be about how we could improve, and there will inevitably be things that don’t go to plan along the way, but yesterday we took a real step forward under Unai Emery. It was as enjoyable a result and performance as I can remember for a long time. I genuinely can’t recall the last time a game has resonated with me as much as this one did. It was more than just a win, more than just a win over them, more than three points.

It was a like a glimpse into the future, a display of what Emery wants us to be, and if we continue to make progress then you can see how, in time, we can get closer to where we all want us to be. And when it comes at the expense of the old enemy, it makes it all the more pleasing.

James and I will be recording what’s sure to be a very enjoyable podcast this morning. If you have questions, topics for discussion or any other contributions, send to us both on Twitter please – @gunnerblog and @arseblog – with the hashtag #arsecastextra. We’ll get to as many as we can, and the podcast will be available before lunchtime.

For now, continue to bask in the victory some more reaction from players past and present, check out the video page, and there’s lots more on Arseblog News.

It’s a busy week with Man Utd on Wednesday, so thoughts will turn quickly to that, but today is all about derby day delight. Happy basking folks.