Home Arseblog, the arsenal blog Arsenal 3-1 Burnley: Dish it out, take some back, and then shut... 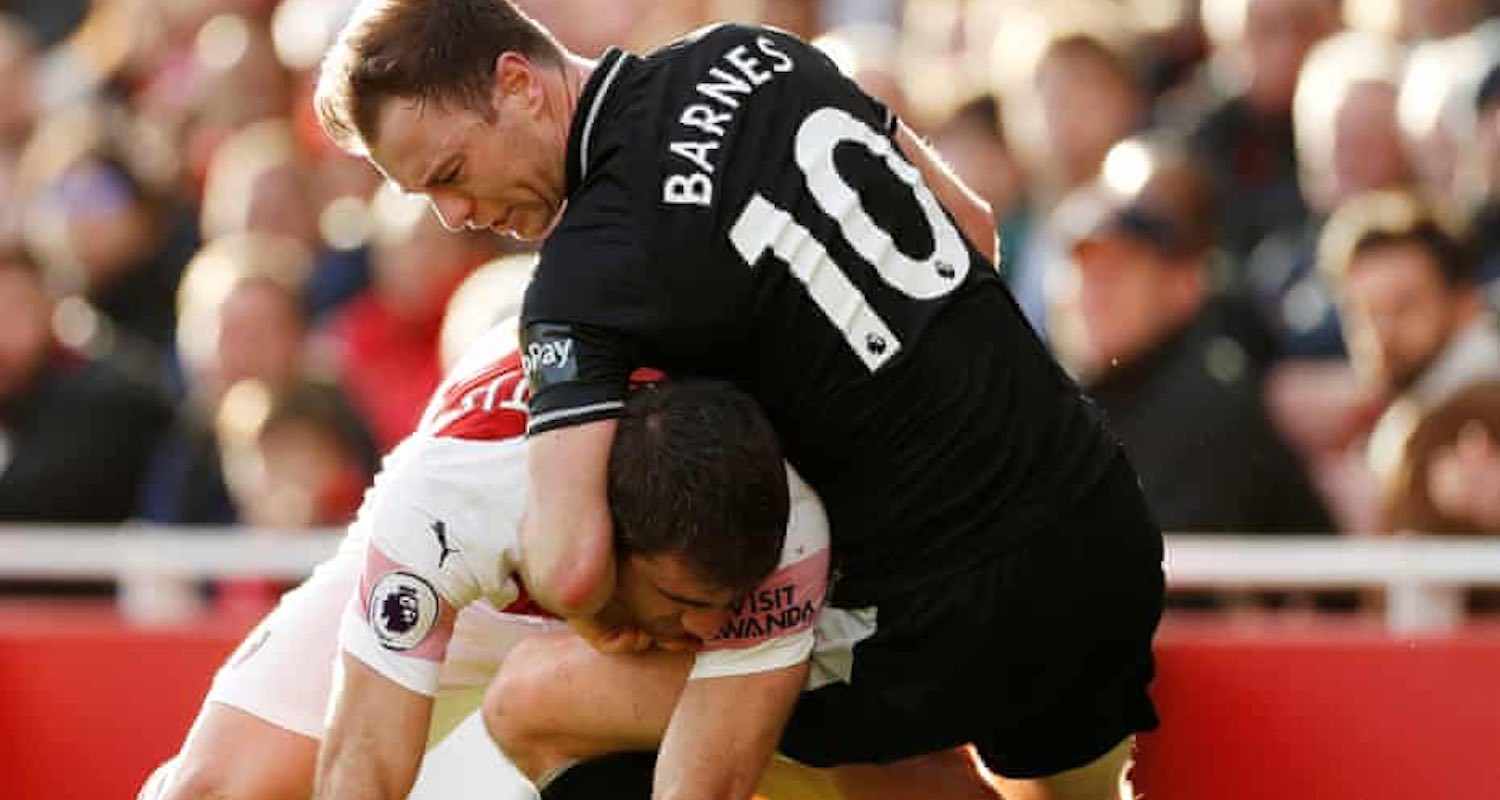 I don’t usually watch post-match stuff on our games but I did yesterday and was filled with Christmas spirit when I saw Ashley Barnes and then Sean Dyche fuming at the 3-1 defeat to Arsenal yesterday. The striker was still annoyed that he’d got booked for his tussle with Sokratis, feeling he’d been picked on, while Dyche accused Arsenal of spoiling football for millions of children by diving all the time.

I don’t usually take sure pleasure in the reaction of the opposition after a game we’ve won, but I did yesterday. It was a hard-fought win because they made it hard. They were tough, physical, hard-working and wanted to beat up on what they perceived as a team who don’t usually like it when the game is played that way – but Arsenal under Unai Emery are a different animal. We’re not as meek, and there are some characters in this team who will fight fire with fire, and bullying with shithousing.

Take the Greek centre-half. I think Barnes might have had a right to have feel unhappy when Sokratis’ elbow connected with the side of his head as he pulled him down near the touchline. Was it deliberate from Sokratis? There’s no way to prove that. I know what I think, and I think if there’s a chance to get a dig in on a bloke who is quite prepared to give it back then he’ll take it. Barnes reaction got him a yellow card, and not long later Sokratis had one for a super-annoying foul on halfway which the Burnley man almost reacted to in the exact way I’m sure our man was hoping he would when he was making the challenge.

Maybe too Burnley have a right to complain about what I thought was Lichtsteiner throwing himself into the air, winning a free kick after Barnes had got the wrong side of him, but that’s experience and years of playing in Italy right there. He’d have a looked a bit of plonker had it not been given but it was, and there you go. Meanwhile, Barnes was kneeing Guendouzi in the back then almost stamping on him, Xhaka got flattened by a challenge which was a yellow all day long, and the referee allowed the visitors to be as physical as they wanted. Swings and roundabouts. If you’re going to bend the rules one way expect us to bend them the other, shut the hell up about it and don’t moan and cry afterwards when it doesn’t go the way you want.

Mesut Ozil’s return to the team was notable, as was the pass he made in the build up to our opening goal. Kolasinac’s run was ambitious, the pass even more so as he bent it around the defence with pin-point accuracy, and Pierre-Emerick Aubameyang was there to shin the ball into the bottom corner to make it 1-0. That’s the kind of quality he has, nobody’s ever doubted that, it’s the application of his talent that’s been in question, and if Emery’s treatment of him was designed to elicit a response, then we can look at his midweek decision as good management thus far.

Leno was brave to head away early in the second half as a Burnley player got booked for kicking him in the belly, and after some good defending the lead was doubled. A break from the back saw Lacazette feed Aubameyang who finished to make it 2-0. Interestingly, he said afterwards they’d practised those kind of finishing scenarios in training yesterday, so that may well have played a part in how emphatic the finish was.

Having lost Nacho Monreal in the first half and reverted to a back three, it’s fair to say we didn’t always look comfortable at the back. I think without Sokratis we really would have struggled, this was easily his best game for us, the kind of game he relishes due to its physicality, but his natural defensive instincts were important more than once. That aside though, he was excellent on the ball too, so it was fine display from the former Borussia Dortmund man.

One of things Emery has yet to get on top of is our defence and we’ve spoken more than once about how many goals we conceded. Yesterday’s concession was scrappy, we didn’t get the ball clear and it broke to Barnes, a player lucky enough to be still on the pitch, and he slammed the ball home – much to the displeasure of Lichtsteiner who pounded the earth like Charlton Heston at the end of Planet of the Apes.

The introduction of Lucas Torreira gave us a bit more bite in midfield but not much more control and it was a nervy time. We’ve been in this scenario before and it always feels like an opposition goal is inevitable. Lacazette came off for Iwobi, the Frenchman’s frustration obvious on the bench, but it was the replacement who sealed the game. He’d been involved in the move earlier, Ozil’s shot/pass deflected into his path and he finished from a position some have said was offside but I don’t care if he was or he wasn’t, the goal stood and that was always going to be enough to ensure the three points.

Like many of the games we’ve won this season, it was a bit of a grind, but we’ve done it so often now that it’s got to be seen as something more than luck. There’s a measure of character and resilience to these results, and it’s necessary because it is hard going right now. I think the lack of a real back four is hard to cope with. Yesterday we played a young midfielder at right back, a left back at centre-half, and when he went off we had a central midfielder in a back three along with a veteran wing-back/full back in there too. There’s a lot to be said for a solid defensive platform on which to build your play, and we don’t have that right now.

I think it’s a major issue, one I hope that the club will address in the upcoming transfer window, but in the meantime if Emery can get results out of this team with a defence that’s stitched together like Frankenstein’s monster then I think we have to be happy with that. Yesterday the goal threat of Aubameyang, Ozil’s creativity, the danger provided by Sead Kolasinac down the left, and Arsenal’s unwillingness to be beaten up by the opposition proved enough to take all three points.

Each game will be a different challenge, we have an away trip to Brighton now on Wednesday then we go to Anfield. Emery will have plenty to think about in terms of how to approach those games and what kind of team to select, but he can do so with the comfort of an enjoyable Christmas win.

James and I will be recording an Arsecast Extra for you this morning. If you have any questions or topics for the podcast send to both @gunnerblog and @arseblog on Twitter with the hashtag #arsecastextra.

That will be up around midday or so, and after that the focus will turn to mince pies, wine and other festive treats. Things will probably slow down on site for a day or two but what news there is we’ll bring you on Arseblog News and I’ll be back with a blog tomorrow of course.

For now, I’ll leave with our now traditional Christmas ditty – Emery Christmas Everybody.