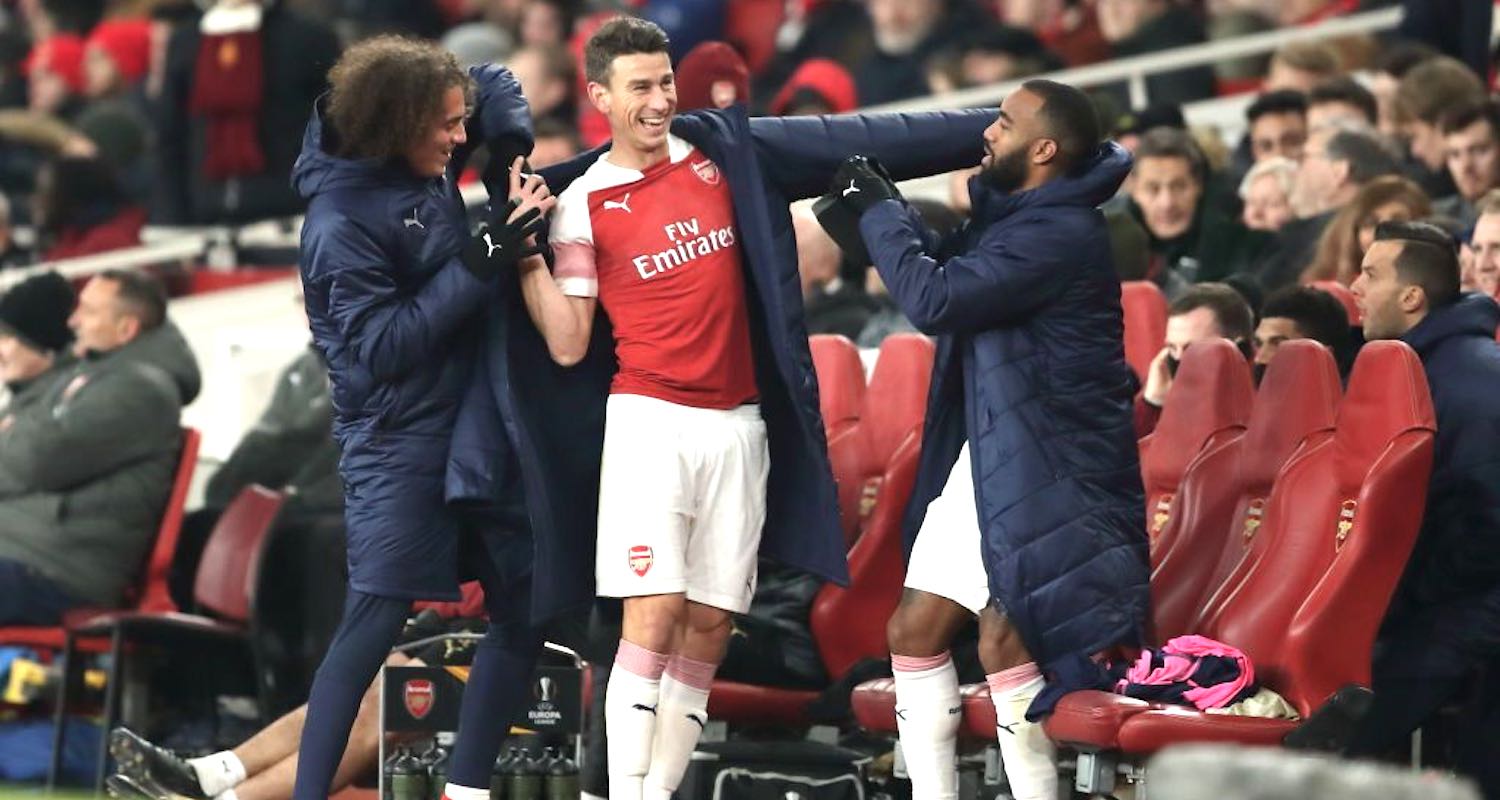 In truth, there’s not a huge amount to say about last night’s 1-0 win over Qarabag in the Europa League. As a game of football it’s not one that will live long in the memory, it was low on quality, low on incident, it had the importance of a pre-season friendly and the attendance last night was a reflection of how fans viewed this particular fixture.

Nevertheless, there were a few bits and pieces worthy of discussion this morning. Most obvious of which is that Laurent Koscielny started for the first time in over 6 months, since suffering an Achilles injury so traumatic it brought out the human side of Diego Costa. He played 72 minutes, didn’t have a great deal to do, but you’d have to have a heart of stone not to have been affected by how happy he looked to be out there, and to have come through the game without any serious reaction.

As he left the pitch to be replaced by Nacho Monreal he raised an arm in triumph, almost like a goalscorer, beamed as Matteo Guendouzi and Alexandre Lacazette helped him with his puffy sub’s coat, and the smile was still all over his face when he did a post match interview with BT Sport in which he said:

Now I start a new chapter on my career, I think I’m better in my head and physically as well. So, for me it’s just important to enjoy with my teammates today. Just to be on the pitch, because for a football player the most important is to be on the pitch with our friends, and today I did that, so I’m very happy.

It’s a timely return to action, of course, as we’re without Rob Holding for the rest of the season and Mustafi and Sokratis are both suspended for Sunday. Assuming there are no ill-effects over the next couple of days, he’s got to be in contention for a start against Southampton, but we’ll wait and see what the update is.

Mesut Ozil also started, his first appearance in a month, and he finished the game with an assist, feeding surprise starter Alexandre Lacazette for the only goal of the game (I assume it was a fitness thing which saw him play, getting him sharp after some time out recently). The French international still had a bit to do, taking a couple of touches before firing across the keeper and into the net, but it was a positive contribution from the German. It was also noticeable how much encouragement he was giving the young players on the night – Joe Willock, Eddie Nketiah and debutant Bukayo Saka. He didn’t look quite as happy as Koscielny with his Europa League run-out, but heading into a very busy and demanding time of the year his return is a welcome boost for the squad.

Speaking of Saka, he had a very encouraging full home debut, the 17 year old was exciting down the left hand side, showed some lovely flashes of his talent, and should have scored late on when put through one on one with the keeper. Maybe a touch more composure with the finish was required, and I’m sure he’ll be kicking himself he didn’t cap a fine performance with a goal, but he can be very pleased with his night’s work. His boss certainly was, saying afterwards:

I’m not going to sit here and say that after one performance this is a player we’ll see a lot more of this season, he’s still just 17, but Emery is usually quite taciturn when it comes to young players. He’s encouraging but never quite as effusive as this. With so much football to play over the next few weeks, he might well feel that Saka offers qualities that his team might need – particularly late in games. We have a gap in the squad since the injury to Danny Welbeck, and while Eddie Nketiah was played on the right to begin with, he looked much more comfortable when moved centrally following Lacazette’s removal. Realistically though, with the Frenchman and Aubameyang for the role of centre forward he’s not going to figure much, and Saka looks a more natural fit for one of the wide positions.

Anyway, maybe we’re getting ahead of ourselves and we need to temper that excitement, but seeing a young player do well and then elevating him to the pantheon of the greatest players that ever lived is a proud Arsenal tradition and I’ll be damned if I’m going to stop now. Saka’s debut also brought about this, which made me laugh, so that’s another bonus:

With Xhaka, Laca and now Saka turning out for them, no team has ever walked the dinosaur like Arsenal. #ARSQAR

So, with the draw for the Europa League knock-out stages being made on Monday, we’ll find out soon enough what kind of opposition we’ll get. There are some decent teams in the mix, but hopefully we can avoid them for the time-being. Or even more hopefully they all get knocked out by giant-killers allowing us a free ride to the final and then the trophy. I get that to win things you usually have to beat the best, but I’d be quite ok with the alternative.

Now, our attention turns to Sunday and that trip to Southampton, a team that will be looking to reverse their pretty dismal fortunes so far this season and with the new manager bump we’ll have to be ready for this one. We’ll preview that and all the rest over the weekend, and stand by for an Arsecast a little later on this morning.

For now, take it easy, but I’ll leave you with a couple of links as we’re heading right towards Christmas. I mentioned the lovely Arsenal prints from Matthew Wood last week, but for the Arsenal fan in your life, they’re well worth a shout for a present.

And if you’re looking for something a bit different and not Arsenal related, my friend Kathryn makes naturally dyed Irish Linen textiles and there’s some gorgeous stuff for your home which would definitely make a nice gift – check out her shop here. Given it’s mid-December, it’d be tough to get stuff beyond Ireland and the UK in time for Christmas, but if you’re not time sensitive she can ship anywhere in the world.

Catch you later with the podcast!