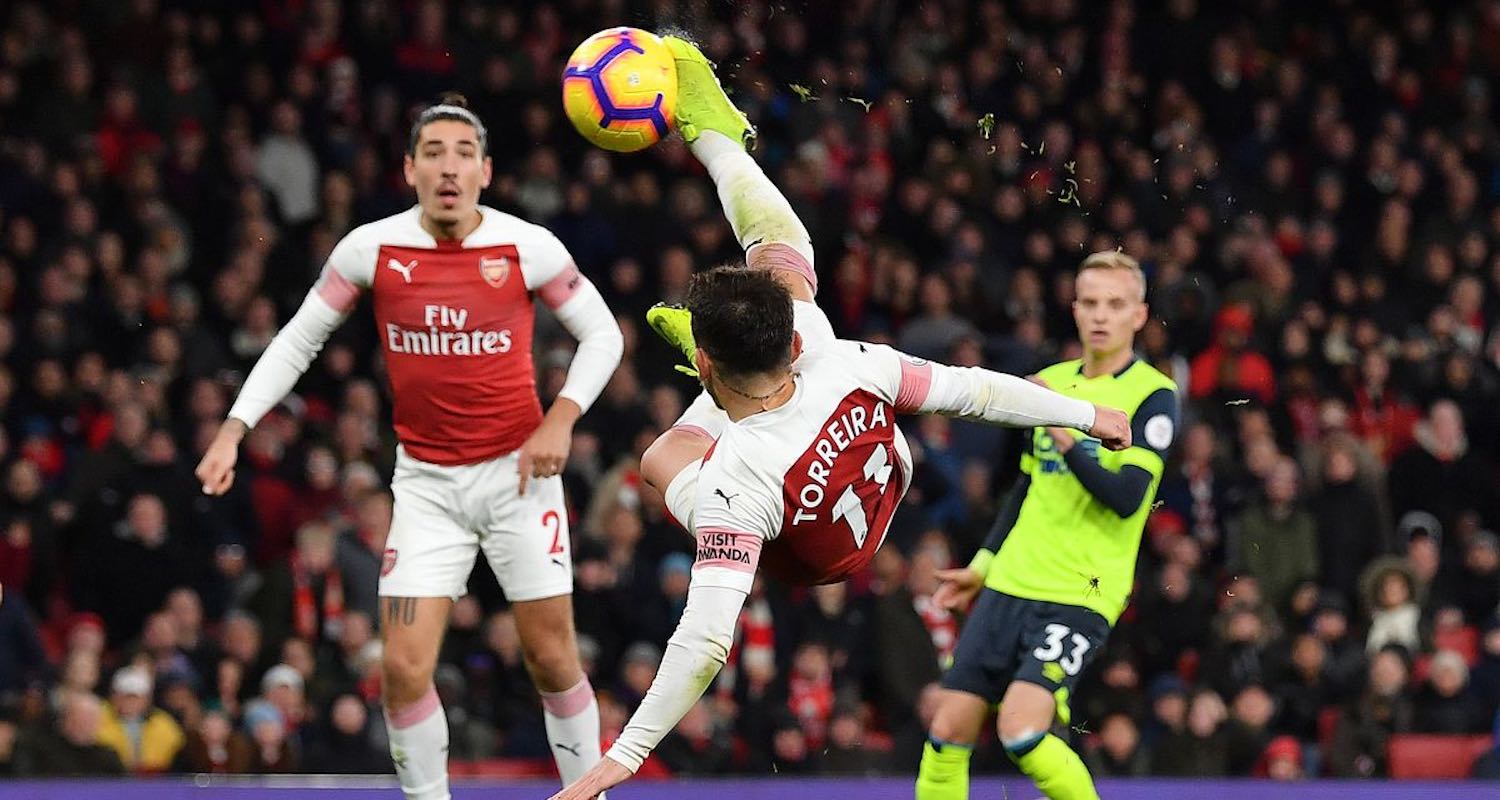 It wasn’t the prettiest performance of the season, but Unai Emery’s Arsenal once again showed an ability to grind out a result when not playing well as Lucas Torreira’s late acrobatic goal gave us all three points against Huddersfield at the Emirates yesterday.

Although we started with both Pierre-Emerick Aubameyang and Alexandre Lacazette, it was a formation with five defenders, and three central midfielders and it was apparent from early on that we might find creating chances a bit of a challenge. It proved to be the case, in part due to the high press of the opposition making it tough for us to build from the back, but also because we just didn’t have the player/players on the pitch who might make those passes.

It took until the 27th minute to have a real sight of goal. I’m pretty sure Granit Xhaka was having a shot with his right foot, but it came to Aubameyang just outside the 6 yard box and he guided the first time effort wide of the post. He is our leading scorer but also guilty of some big misses this season, which I’m sure is why Emery spoke last week about his ability to improve.

Missing one sitter is bad enough when chances are few and far between, but two is verging on negligent. Good work down the right from Bellerin sent Guendouzi through, he squared it perfectly for Lacazette who was unmarked on the penalty spot. I looked like he slipped as he hit it, blasting it way over the bar, but it was another fantastic chance gone begging. If you get a chance, watch Guendouzi’s reaction to it.

The French international then had a goal ruled out for offside. He was marginally off in the build-up, but Huddersfield then had possession and a mistake from their defender saw him go through and around the keeper, but the flag went up and the goal was not given. I think it should have stood, perhaps I don’t know the rule well enough but I can’t see how he could have been offside when Huddersfield had control of the ball.

We then had a period of the game when the referee came close to losing control, issuing 5 or 6 yellow cards in a short period of time. I thought the booking of Xhaka for being fouled was ludicrous, he booked Mustafi for the same thing when he went down in their box, Sokratis for a foul, and Stephan Lichsteiner for his reaction to a nasty foul on Lucas Torreira. A couple of Huddersfield players went into the book too and it all threatened to get even more heated, the half-time whistle helped in that regard.

Then we had another double change at the break with Henrikh Mkhitaryan and Alex Iwobi replacing Lichtsteiner and Lacazette – the first one understandable, the second one not so much unless he was feeling the groin injury he’d suffering with recently. Some early promise from the two subs petered out, neither able to make the kind of impact we saw last week when there was a double change against Sp*rs.

Aubameyang missed another good opportunity, heading wide at the back post, Mustafi went off injured meaning Nacho Monreal made his first appearance since early October, and little by little we forced them deeper and deeper as we looked for the goal we needed. It wasn’t particularly cohesive, there were some flashes of danger when we got the ball into the box, but it looked as time was running out. Guendouzi was booked for diving in the box but watch it again, he goes down after hip to hip contact with Mooy (I think) and it was as much a penalty as it was a dive for me.

Without the likes of Ramsey and Mesut Ozil – players who can change a game – and with Iwobi and Mkhitaryan struggling to contribute, we were always going to need something special. And that’s exactly what we got. Guendouzi crossed to the back post, Aubameyang’s first touch was superb, he got a bit of luck with his second, and when he dinked in a cross Torreira was there to volley home with a scissors kick, like a nijna oompa-loompa, and that was the breakthrough. Our nominally most defensive midfielder was the man on the spot, high up the pitch. We’ve all heard the stories about how he started his career as an attacker, those formative years stood him and us in good stead yesterday.

There were 7 minutes of injury time, some of it due to their time-wasting but a good chunk of it because of an injury to one of the key time-wasters, and there was a heart in mouth moment for me when Sokratis shouldered one of their blokes in the back late on. He is an aggressive, physical defender and there’s a lot to like about that, but sometimes I worry he gives the referees a bit too much to think about – and the last thing we needed to do was give this particular official any chance to make it more about him than he already did. Thankfully he saw nothing wrong with it, but I can think of other referees who would have relished the chance to point to the spot there.

In the end though, I think we did enough in terms of chances created to take all three points, and when the winner is as spectacular as that one, it helps you forget some of what came before it. Afterwards, Emery said:

They stopped our rhythm a lot over 90 minutes. There were also a lot of yellow cards, fouls and time wasting. We needed patience and to win by waiting for our moment. In the first half we had chances and maybe a goal, and in the second half it was the same. The goal came later but it’s given us a good result in the end.

While the match-winner dedicated the goal to the fans:

These goals help the team to keep winning, keep improving and keep building confidence. We have a fantastic team and a great group and we enjoy playing together. The goal is for the fans too – they show up every week and follow us to all the different stadiums. They’re always there so this goal is for them first and foremost.

With everyone around us winning yesterday too, anything less than a win would have been seriously disappointing, so it was a hugely important win. The team’s ability to find goals in the second half remains a strong point, and there are always going to be days when it’s a struggle and you need to dig out a result. Yesterday was unquestionably one of those days for Arsenal, and the positive side of that is that we were able to do it.

I agree with Emery that they disrupted our rhythm with a lot of fouls and time-wasting, and that made things difficult. I do wonder though if such a defensive minded system was the right approach for this opposition. I know options were limited because of injuries and absences, but perhaps it was a bit too cautious.

Without Welbeck, Ramsey and Ozil there’s a gap in our creativity/end product in the final third. Between them, in their last 11 appearances each, they’ve contributed just 2 assists (Iwobi) and 1 goal (Mkhitaryan). I know they work hard, and Emery appreciates their physical contributions but it’s a problem for us, and when you consider the outlay every week on Mkhitaryan in particular you expect more from a player of that reputation.

Thank Sven for Lucas Torreira though. The Uruguayan didn’t have his best all-round game yesterday, but there’s something indefatigable about his spirit and the way he plays the game. If anyone was going to find a way through yesterday it was him, and he made that transfer fee we paid to Sampdoria look even more of a bargain.

With Europa League next week, followed by a trip to Southampton complicated by the absence of both Sokratis and Mustafi due to suspension, Unai Emery has got plenty to think about as the fixtures come thick and fast. He’ll sleep easier on the back of three points against Huddersfield though, and he’ll have enjoyed the character of his team more than the performance itself. The former is hard to foster so having it is a real positive, the latter he can definitely work on at training this week.

Right, that’s your lot for this morning. Have a great Sunday, back tomorrow with more and an Arsecast Extra. Until then.