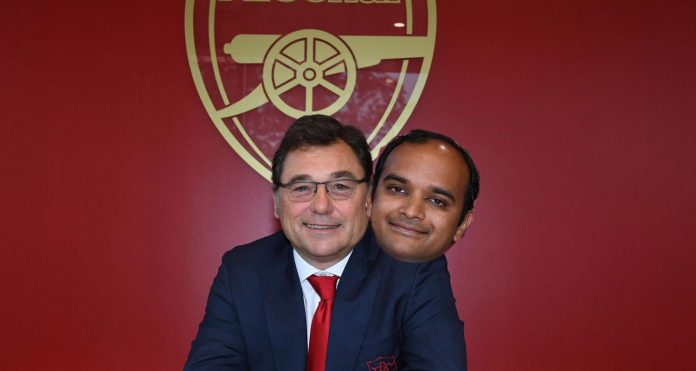 Are two heads better than one? I suppose if you were to ask Zaphod Beeblebrox he would tell you yes, yes they are, but then it begs the question, in this context at least, as to whether or not you really want the third cousin of Ford Prefect in charge of your football club.

I refer, of course, not Douglas Adams’ five part trilogy, but to the departure of Ivan Gazidis – which was made official on October 31st – and the fact that instead of having a new CEO we’ve split the job in two. Raul Sanllehi is now our Head of Football and Vinai Venkatesham is our Managing Director.

They are our now executive Zaphod Beeblebrox and much rests upon their shoulders. Over the last couple of weeks, they’ve talked the good talk about the ambition of the club and how they’re going to work together. Sanllehi insists this will be a healthy relationship:

We are two leaders. We have two different areas which are very compatible and not separate. He is going to be participating in most of my decision making, the same way I’m going to be with him.

He’s off-field, I’m on-field. We can work very well and have already done that before. We know each other for seven years … I don’t foresee many areas of conflict.

It sounds lovely, and clearly there’s an obvious distinction between their key responsibilities. Sanllehi will deal with football, Venkatesham will deal with business, and where the two areas overlap they’ll have a good sit down over a nice cup of tea and an almond slice and everything will be hunky-dory. Until such time as it isn’t, because inevitably there will be things on which they don’t agree, and this is where I’m interested to see how this goes.

When you have one man at the top of the executive food chain, a CEO or whatever you want to call him, you know the buck stops somewhere. He has to make the final call on something, and if it works great and if it doesn’t then ultimately he is the man responsible. I know we all have this utopian idea of everyone working for Arsenal wanting only the best for the club and ensuring that they come together, right now, in sweet harmony at all times, but that ignores human nature, it ignores the fact that football clubs are highly political places and the people at the top of them like power and influence which can inform their decision making.

Now, I’m not saying that about Raul and Vinai, simply that when you have two men who have to agree on decisions before they’re enacted, it can often lead to conflict. That doesn’t mean they’ll have at each other with knives and cutlasses, nor that conflict is necessarily a bad thing at all times, but if there’s an executive WhatsApp group, you can be sure there are back-channels within that. Maybe Josh and Stan are the ones who make the final call on things, but as it stands a lot rests on the Head of Football and the Managing Director getting along famously.

As with many things about Arsenal at the moment, it’s going to be interesting to see how it all plays out. In their interviews they’ve said all the right things, but without wanting to be overly cynical, if Ivan Gazidis had one key skill it was doing exactly that. The words flowed gently down the River Prolix out into the warm Sea of Verbosity, but then you realised he’d talked a lot but said very little and in time you realised he’d done even less.

The point is: it’s not difficult to say the right things, what’s more challenging is backing up claims about how we can compete with the biggest clubs in Europe, how extraordinarily ambitious we are, how we can do things that can surprise you, and all the rest. In fairness, it can’t always have been an easy job, with the all-powerful Arsene Wenger at the top of the Arsenal food chain – which is where the CEO should be – and an absentee landlord owner in dispute with a Russian oligarch over full control of the club. Nevertheless, his shtick became tiresome pretty quickly because it’s annoying when someone hints very strongly time and time again that they’ve going to deliver you cake because you really love cake but instead you get some kind of supermarket own-brand digestive biscuit whose best-before date was a few months back.

The two new men have got a big job to do, and they may well face some of the same issues with the owner as Gazidis did. There certainly doesn’t appear to be any kind of financial support incoming, so they’ll have to be good at what they do, find creative solutions, and manage things – and by things I mean player contracts – much better than Gazidis did. And I wish them all the luck in the world.

Meanwhile, the boss will meet the press today ahead of the Liverpool game. The big questions are: Is Hector Bellerin fit? And, do we have a left-back for tomorrow? When you consider how important the full backs are to the way that Emery wants his team to play, it would be a massive blow if the answer to either or both of those questions was ‘no’. Maybe you can get away with it against some opposition but not the Mugsmashers, and even on Sunday we saw how having to play Granit Xhaka at left-back ultimately cost us (even if it was far from all his fault).

As ever, we’ll have the team updates and all other news over on Arseblog News, and for now I’ll leave you with today’s Arsecast which talks a lot about the game this weekend, and lots more. Happy listening, I’ll be back tomorrow to preview the match.