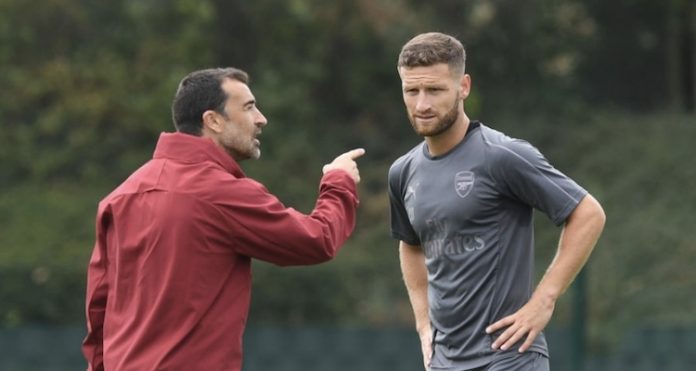 Morning all, happy Friday and we don’t have too long to wait until we really get back into the swing of things. There will be an Unai Emery press conference today – “Good afternoon” – as well as team news updates and we look ahead properly to Sunday’s trip to Bournemouth over the next couple of days.

In the meantime, the boss took some time this week to speak to Marca about his first few months at Arsenal and the challenges of the job. You can read a full transcript of it here, and I did like his analogy of having to ‘open the windows’ when he arrived, to let some fresh air into the house and to get his own job underway after 22 years of Arsene Wenger.

Despite some publications inevitably attempting to turn what was a considered and respectful interview into an Emery v Wenger thing, I don’t think there was anything he said that could be considered out of order. Even those who were still behind the former boss before his departure would struggle to find fault, but he was very clear that he had to impose his own ideas and make his own mind up about the players he had and what needed to be done with them.

Anyone who has watched Arsenal over the last number of years would acknowledge that our strength was in attack, which was where Wenger’s focus was primarily, and the Spaniard is looking to redress the balance a little bit:

Before Wenger, Arsenal celebrated the 1-0 and it was based on defensive solidity. With Arsene the joy was in attack, with high quality players. The perfect combination was the Invincibles, but over time only technical quality and offensive freedom were taken care of, losing the defensive structure. What I want is to unite both essences and be more competitive.

This recognition that we are a team which needs to be more solid defensively is not new. Just before the season began the Head of High Performance, Darren Burgess, gave an interview in which he outlined more or less the same thing, saying of Emery:

Most people recognised that our defence was poor last season we conceded a ridiculous number of goals around 50 or something which Arsenal hadn’t done in maybe 15 years so one thing he’s been working on unsurprisingly is making the team a bit more solid and better organised in that area. Obviously it remains to be seen how successful that is but that’s an area he’s focused on.

So, it’s clear this isn’t something he’s paying lip service to, and yet when you watch us this season it’s apparent that it’s still an area which is in need of improvement. Without wanting to bang the same drum again, we concede too many chances to the opposition, and that’s with all the work that Emery and his coaching staff are doing to make us better back there. We know it’s a process, it will take more time than just 12 Premier League games, but it’s still an issue.

We can talk about defending being a team job and of course that’s true. There’s a lot that organisation, structure, discipline and awareness from those outside the back four can do to help, but ultimately the personnel you have plays a major role and there are serious questions to be asked about the players we have.

When you look at the defenders at our disposal and ask yourself ‘Who are the players around whom Emery can build for the future?’, you’ve got a right back with real potential and maybe Rob Holding as a central defender. After that you’ve got a collection of players who are either relatively short-term options because of their age, or not quite good enough.

Shkodran Mustafi and Sead Kolasinac don’t cut the mustard for me, not as regular starters anyway; Nacho Monreal and Laurent Koscielny are veterans with injury problems and whose best years – with all due respect – are just behind them; Stephan Lichtsteiner was always just a stop-gap at 34; and then there’s a 19 year old central defender in Dinos Mavropanos in who many people are really invested in because they so want a young man to come through and be the rock we need at the back, but there’s no evidence to suggest he’s going to do that just yet.

Sokratis came in this summer and has been hampered by injury too, and assuming he’s better now should get a run alongside Holding because that’s the only partnership we haven’t seen with any regularity this season. It relegates Mustafi, the common denominator in the centre of our Premier League defence, to the bench for a while. If it’s no better with the other two he can fight to regain his place, but what it will do absolutely hammer home is the need to upgrade via the transfer market.

If we all knew the Arsenal midfield needed the kind of player Lucas Torreira has turned out to be, then surely it’s blindingly obvious that the centre of our defence needs a similar injection of quality. I realise it’s easier said than done, but you can’t drive 100 miles per hour in a car that will only go 70 miles per hour, no matter how hard you try. Which is to say we have limitations that coaching and training ground focus can only go so far to correct, and perhaps until such time as we can make improvements there this instability is something we’re going to have to contend with.

Anyway, with so much football coming up in the next few weeks it’ll be interesting to see what Emery does, if the Interlull has given him time to consider some changes back there, and if collectively we can work to offset some of the problems we’ve had. We’ll have plenty of match practice at least.

We’ll have all the team news and everything else for you over on Arseblog News throughout the day, and I’ll leave you with some extra reading from Tim Stillman who also joins me on the Arsecast to discuss Arsenal Women, the January transfer window and more, before I chat with the brilliant David Squires about his new book – and you can win a copy too in devilishly tricky competition.

And, as he announces his retirement from football, our old friend Andrei Arshavin pops in right at the end to say goodbye in his own quite imitable way. Listen and subscribe below.