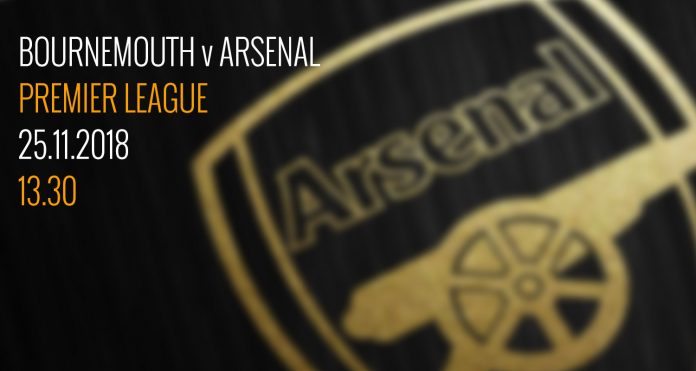 Throughout this week Unai Emery has stressed the need for his team to get back to winning ways. Although we remain unbeaten in the league since the game at Stamford Bridge in August, we’ve taken just 3 points from the last 9 available, and it’s self-evident that taking the maximum from today’s trip to Bournemouth is important.

Beyond that though, we have a chance to close the gap to the top four. Although Sp*rs extended their lead over us to 6 points with a 3-1 victory over Chelsea last night, we can move to within a point of fourth with a win today. Bournemouth started the weekend in 6th but results have seen them slip down to 8th and although they’ve had a good season so far they come into this one off the back of two defeats.

Yet our last game, at home to Wolves, saw the visitors arrive at the Emirates having lost their previous three games and you don’t need me to remind me what hard work we made of that one. Which is to say we can’t take anything for granted today, and I’m curious to see what kind of thinking the manager has done during the Interlull.

Will he make a change at the centre of our defence, for example? He talked up the qualities of Rob Holding during the week, and with Sokratis back to full fitness there’s a chance to see how that partnership works at Premier League level. They’ve played together four times in the Europa League and we’ve kept a clean sheet in three of those games so it’s something to consider. I guess much will depend on how Emery views the various threats of Bournemouth and which of his defenders might be best suited to deal with them.

Sead Kolasinac will play at left-back in place of Nacho Monreal and as I touched on yesterday he’s got a chance to establish himself if his performances are good enough. In midfield I can’t see beyond the Lucas Torreira and Granit Xhaka partnership but after that it’s difficult to know exactly what he’s going to do. Could we use a three man midfield with Matteo Guendouzi in the mix? Will it be a case of Alexandre Lacazette up front, Pierre-Emerick Aubameyang on the left, and then Mesut Ozil + 1 of Alex Iwobi or Henrikh Mkhitaryan on the right?

We’re not exactly replete with options but as much as we need defensive stability we also need to find attacking balance too, and that hasn’t been there for the last few weeks. As it’s so early in his time in job it’s hard to know if he’ll try something different or simply let them play themselves into some kind of form. That second option feels much more like something Arsene Wenger would do, trusting in the quality of the players to make it work, whereas we know Emery is much more analytical and may well have to make a difficult decision or two.

The absence of Danny Welbeck must surely play a part, because his presence in the squad gave him an experienced and versatile attacking option from the bench. If he starts both Lacazette and Aubameyang today, he’s limited in terms of what he can do from the bench if we need more firepower later in the game. Eddie Nketiah is a bright prospect and somebody we all hope can show his talent when he’s given the opportunity to do so, but he’s just 19 and without a Premier League goal to his name so it’s a lot to ask.

Of course there’s Aaron Ramsey and whichever of Mkhitaryan or Iwobi doesn’t start today (or maybe even Ozil if he picks a similar kind of team/system to the one we played against Fulham), but I wonder if keeping one of his two strikers in reserve is both sensible and a way for him to solve what has been something of a conundrum throughout the season when it comes to getting both of them in the team at the same time.

In his interview with Marca this week, Emery said:

We’ve had four draws in our last five games and we need tArc now. I’ve spoken with my team during the international break. Our goal is finish in the top four but it’s not easy. It’s harder and harder to get there. Against Liverpool everyone was happy but we only drew. That’s not sufficient.

That sounds to me like a man who is not just going to pick the same team and hope it works out. I could be wrong of course, but I suspect we might see a few little changes today and fingers crossed those will make the difference between one point and three at the end of the 90 minutes.

Join us for a live blog if your Sunday commitments mean you can’t see the game, and we’ll have a report, player ratings and all the rest on Arseblog News afterwards.

Catch you later and let’s hope we can get back to winning ways.