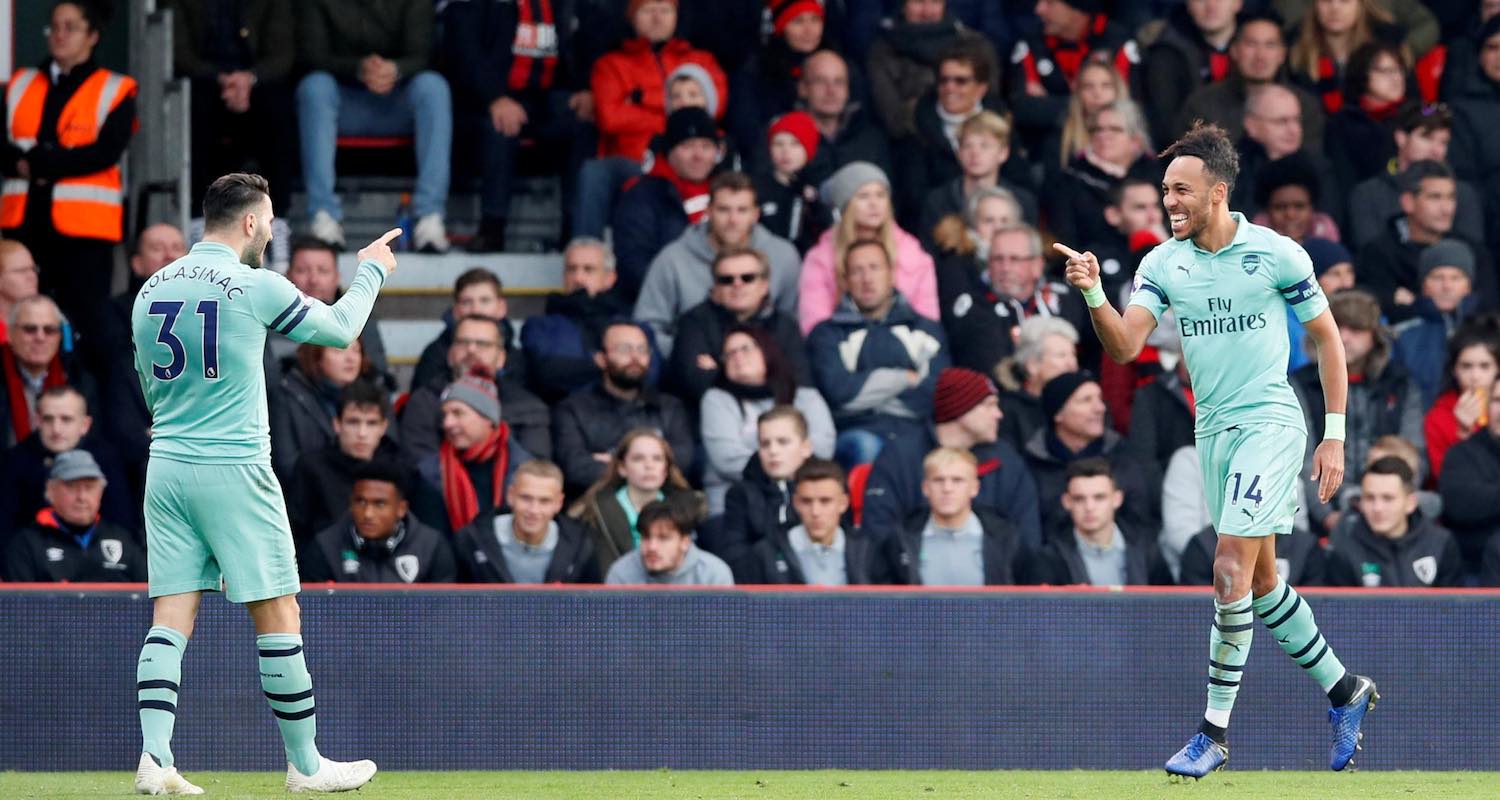 I’m sure I’ve said this before, but analysing Arsenal under Unai Emery is difficult thing because there’s so often a kind of distance between results and performances. The former have generally been very good, the latter very much a mixed bag and I think that was the case yesterday in our 2-1 win over Bournemouth.

You can’t argue with the result: it was our fourth win on the road this season and it moved us to within a point of the top four. Bournemouth had only been beaten once at home, a 2-1 defeat by Manchester United a few weeks ago, and we know fine well that it’s a tough place to go against a team that works really hard and is well organised by Eddie Howe.

Our leading scorer got us the winner to move into double figures for the season and the coach made some changes to his side which was something I wrote about in the preview. We played all our available central defenders in a back three, used wing-backs, left Mesut Ozil on the bench because Emery was expecting a physical encounter away from home that he clearly felt didn’t suit the German, and all of those things are positive because he’s willing to do them rather than stick with the same system week in, week out with fingers crossed that it just works.

You can’t argue with the result, no doubt about that, and I wouldn’t even try anyway. I like the result, we took three points away from home that we badly needed – especially with a North London derby on the horizon. Yet we can analyse the performance, and there was good and bad to it, not least the fact that yet again we started a game very slowly. Bournemouth were the better side early on, our back three didn’t look that solid – especially down our left hand side, and as early as the 8th minute we should have been behind when they had the ball in the net but it was ruled out, incorrectly as it turns out, for offside. Mustafi was on his arse in the box, the linesman stuck his flag up after David Brooks slid the ball beyond Bernd Leno and obviously that would have had a significant impact on the story of the game had it been allowed.

It was interesting to note how high Bournemouth pressed us and how frequently Leno kicked it long. I wonder did Petr Cech sometimes feel under pressure to make passes he kind of knew he shouldn’t make as we implemented Emery’s ideas, because Leno seems much more inclined to just lump it. We did grow into the half though, Torreira hit the post from outside the box, Aubameyang blasted over from close range, and on the half hour we went ahead when Jefferson Lerma volleyed a Sead Kolasinac cut back into his own net for the finest own goal finish you’re likely to see this season.

It looked as if we were going to have a half-time lead for the first time under Emery, but when a move broke down in their box they came forward, Arsenal were far too slow to get back, and Rob Holding was left with two men to deal with. Josh King’s finish was excellent, curling it beyond Leno, but it was a goal we should never have conceded considering how high up the pitch we had possession with just seconds of the first period remaining.

The second half continued to be a struggle although that was true for both sides. It wasn’t a game replete with chances and we found it hard to create for Aubameyang who did fire over when put through by the otherwise ineffective Mkhitaryan following a Bournemouth mistake. Holding had to patrol the entire left flank himself, playing as centre-half and a wing back because Kolasinac was nowhere to be seen from a defensive point of view, but it was the Bosnian who supplied Aubameyang for what turned out to be the winning goal after a clever pass from Iwobi put him in behind after we’d take a quick free kick.

In some ways, Kolasinac summed up our performance. He was involved for both goals, but that aside had a woeful day. You can’t argue with his attacking contribution, but I’m struggling to think of another player who has so little interest in doing the basics of his job as a defender. If he had 10% of the desire to run back towards his own goal as he does in going forward, he’d be a genuine asset back there, but he’s a defensive liability and you have to think that the formation we used yesterday was in part a way of offsetting his weakness. And weakness is being kind actually. If he just wasn’t very good at defending that’d be one thing, but he’s just not prepared to work hard enough at it. For a coach like Emery who demands that as a kind of baseline from his players it’s got to be frustrating and unless he sharpens up in a big way I struggle to see him as part of the Spaniard’s long-term plans.

Yet without him we wouldn’t have taken three points yesterday because nobody else created anything of real substance. Mkhitaryan faffed his way around the pitch and I coppped some flak on Twitter for comparing him to Theo Walcott. Some thought I was being mean to Theo, others to Mkhitaryan, but the more I see him the more I think that comparison holds up. He is capable of producing quality moments but his all round game doesn’t live up the same way. Yesterday, he dribbled the ball out of play, his passing was off, he fluffed his lines when put through by Aubameyang by taking a heavy touch and then kicking the ball off his own foot and out for a goal kick, and it was like one of those games we saw Walcott produce many times over the course of his Arsenal career.

I think both Arsenal and Manchester United will feel that neither have really benefitted too much from the Alexis–Mkhitaryan swap deal. It’s been great for the bank balances of the players and the agents, but in pure football terms you can’t say that either team is better off because of it. And all the while our biggest star and highest paid player is sitting on the bench because the coach doesn’t believe he’s physically capable of playing in a game like this away from home.

Unai Emery is obviously making that decision based on everything he sees week in week out and in training, but Ozil didn’t play during the Interlull and would have been 100% fresh, we were desperate for a bit of craft yesterday to open up the Bournemouth defence, and we didn’t make a change until around the 80th minute when Matteo Guendouzi came on for Torreira. Aaron Ramsey was introduced a few minutes later and I can understand Ozil isn’t the kind of player you bring on in the last 10 away from home when you’re trying to hang onto a lead but his absence and lack of involvement yesterday only raises more questions about him.

That said, I’m all for Emery shaking things up and making sure players don’t exist in comfort zones. It’s just that when he does it, I don’t think he’s necessarily finding solutions which will reassure him. He picked a side to win yesterday and we won, but what aspects of that performance would make him believe it’s the kind of team and formation that would be able to beat Sp*rs in the North London derby? He obviously had a good think during the Interlull about how to get more from this group of players, and ahead of Sunday’s game he’s got a bit more to ponder – particularly with a long trip to the Ukraine in midweek.

Still, he’s finding out more about his team and players each week, and if we’re winning games again while he does that then it’s far preferable than having to firefight dropped points – even if we were the width of the post away from doing so again yesterday. The unbeaten run is extended, there are some positives take from simply winning, and the next big test comes on Sunday where you hope we’ll produce more at home the way we did against Liverpool a few weeks ago.

If nothing else, Emery’s Arsenal are giving us plenty to talk about as we find the line between the pleasure of three points and analysis of not altogether convincing performances. James and I will continue the discussion on the Arsecast Extra this morning, if you have any questions or topics for discussion send to @gunnerblog and @arseblog on Twitter with the hashtag #arsecastextra and we’ll have the podcast for you around lunchtime.