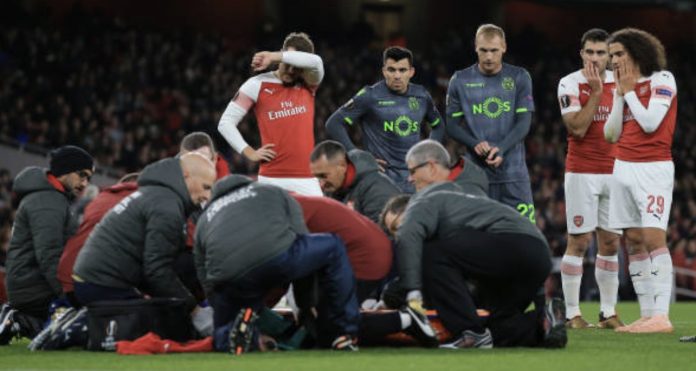 Arsenal’s 0-0 draw with Sporting last night isn’t one of those games that will go down in the annals as a classic. We huffed and puffed but despite plenty of possession we never really threatened them with any consistency. The draw, thanks to Vorskla losing to Qarabag, means we’ve qualified for the knockout stages of the competition – although we’ve yet to assure top spot in the group which was the target laid out by Unai Emery yesterday.

The performance wasn’t bad, per se. If we didn’t overly threaten their goal, they barely came near ours so you have to give a heavily rotated side some credit for that, but the one thing that will live in the memory is the incident in the 26th minute when Danny Welbeck went down after challenging for a header in the box. You could see immediately that something was seriously wrong in the way he moved, and pictures later showed exactly why.

As he landed his ankle twisted horribly – the picture is here if you’re inclined to take a look – and immediately the medical people were on. They called for a stretcher, Welbeck was given oxygen and viewers at home knew there must be something more to this than the usual knocks players pick up because BT didn’t show any replays. I think there’s probably a discussion to be had about moments like this is: is it sensitivity to the player and his situation, or something more censorious? Either way, when they choose not to show an incident again, it tells you it’s something out of the ordinary.

This morning we’re still waiting for the complete diagnosis but in his press conference afterwards, Emery said he feared that Welbeck had ‘broken something in his ankle‘, and it’s impossible not to feel gutted for the striker who has, since he joined Arsenal in 2014, suffered two really serious knee injuries. Obviously you’d feel for any player who gets badly injured, but Welbeck of all people really doesn’t deserve this.

Regardless of his status – third choice striker behind Lacazette and Aubameyang – he’s one of the good guys, hugely popular within the squad, and his versatility and experience is something that the manager has taken advantage of this season. He’s got five goals to his name, and it was good to see him fit and available. For him to suffer an injury which appears to be this serious seems particularly cruel, even more so when you consider his contractual situation.

It is always a risk when a player’s deal is running down. You don’t have the security of knowing there’s a contract there, some assurance for your future as you come to terms with the fact you’re going be out of action for a long time, and then having to go through the gruelling process of rehabilitation once again.

After the first injury, bone bruising which then required surgery, Welbeck said, “It’s frustrating being on the sidelines and watching in – you feel kind of helpless”, and it does appear as if that’s something he’s got to endure again. Maybe surgery, then rehab, then getting fit again, learning to trust the ankle and beyond the physical effects there are the mental challenges he’ll face. The usual cohorts who believe a player’s pay-packet insulate them from any sympathy will be out there of course, but depending on the seriousness of the injury last night could potentially be the last time Danny Welbeck plays for Arsenal, and that’s a real shame for him and for us in the context of this season.

I think it had an effect on the players, even though they will have been able to compartmentalise it well enough. Alex Iwobi described it as ‘mentally challenging’, which is understandable, but that aside it was a game in which we never really found our rhythm, particularly in the final third. There were a couple of half chances here and there, but not one moment where you felt like we passed up a great opportunity to get the goal that would almost certainly have won us the game.

To be fair, the manager was robbed of another attacking substitution when Stephan Lichtsteiner’s hamstring went just as we were about to introduce Eddie Nketiah. You have to have sympathy for the young striker – he was stripped and ready to enter the fray, but the injury meant a rethink and Ainsley Maitland-Niles came on at right back. He looked gutted by it, but I don’t think Emery had any real choice. It’s a shame for Nketiah as he almost made his first appearance of the season, but Welbeck’s injury will likely mean greater inclusion for him. That’s football.

Afterwards, the boss focused on Welbeck first, as you’d expect:

It’s the worst news tonight, this injury. It’s clear that we are with him in these minutes. He’s a very good person. His commitment with us is very big. He’s helped us with his behaviour, with his quality and his capacity. It’s a very big injury for him, for us, for all people who like and love him as a person.

It was a difficult game. We remember the match in Lisbon, it was also difficult. We won that and now we can say those three points away were very important for us. This point today isn’t enough for us but at the moment we are on target to be first in the group. We are first at the moment and we are going to continue on our way for that.

It does leave him with something to ponder ahead of our next game, which is a challenging journey to Ukraine which requires an amount of road travel after a long flight, and is followed by a North London derby and then a trip to Old Trafford on the Wednesday. I think the team he picked tonight illustrated that his focus is primarily on the Premier League, so I’d be very surprised if that changed between now and November 29th when we head out to play Vorskla.

There’s plenty of time to think about though, we have an Interlull coming up, and it’s a situation we can revisit. In the meantime, we’ll wait for a concrete diagnosis for Danny Welbeck and wish him a speedy recovery. He’s been through the mill a couple of times with injury since he joined Arsenal, and sadly it looks as if he’s going to have to do it all over again.

When we get more, we’ll have it for you over on Arseblog News, and due to the evening kick off there was no time to record a podcast last night but I will be putting something together this morning which should be available before lunchtime.