I went to bed last night and as I was trying to fall asleep I was struck with inspiration as to today’s blog. Not only did I know what it was going to be about, I knew how I would write it – with more of a flourish than usual, not that that’s easily defined but in my head it made sense as it was almost a fully formed thing. I knew where it would go, and how I would get there.

I remember distinctly thinking this was fantastic because as it’s the Interlull Arsenal news and Arsenal related #content is pretty thin on the ground, so to have the blog sorted was pretty handy. I’d write it, you guys would read it, and the world would keep on turning.

This morning, however, there is a slight hitch. I can remember having the idea of the blog, I just can’t remember what the idea itself is. It’s tantalisingly close, on the tip of my tongue kinda thing but as I’m typing not talking it’s the tip of the fingers, but what exactly it was remains a mystery. It’s like there’s a little Lucas Torreira in my brain intercepting the neurons of creativity before they hit the back of the net, whatever the net is in brain terms. Is the Frontal lobe? The Temporal Lobe? Or Shatner’s Bassoon?

I wish I knew. As it is I’m sitting here with another 800 words to write and nothing to write about. Some of the players are away on international duty, many of them are not. It seems there are far fewer with their national sides than there used to be. Remember the old days when Arsene Wenger would have to spend an entire Interlull at the training ground with Denilson, Manuel Almunia, Craig Eastmond and a teenage Francis Coquelin? Those must have been trying times for him. Imagine the sleepless nights you’d have knowing that’s what awaited you in work the next day.

Unai Emery has got more to work with during this break. The full list of who he’s available to him is here, and there are even pictures of the chaps training on the official website. 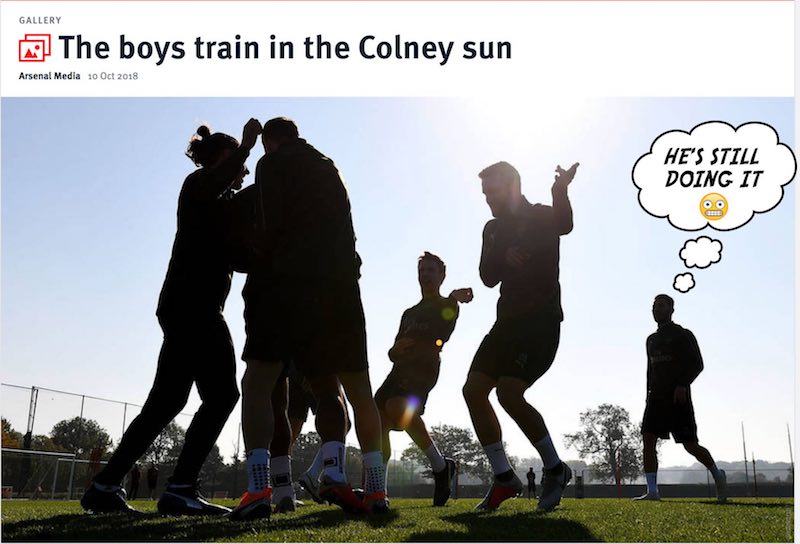 Is it a coincidence that there appears to be countless nutmegs in training and that Alex Iwobi has been nutmegging the shite out of people in games this season? I don’t know. The good thing is that when he does it in a game he doesn’t do the air guitar + high pitched squibble-bibble noise that they do in training, because that would be somewhat counter-productive – allowing the defender to get back and nick the ball.

On Iwobi I’m glad there’s been a bit of a turnaround in opinion towards him this season. He’s played a significant part in that with his performances and the hard work he’s clearly put in in the gym to bulk up and become physically much bigger and stronger, but it was always a bit of a curiosity to me how people would talk so openly about the struggles of young players to get beyond the wall they seemed to hit under Arsene Wenger without ever considering the idea that with different coaching and tutelage they might actually do that and improve.

I’ve said it before but I think both he and Hector Bellerin, two players roundly criticised last season for their struggles with form and consistency, have found themselves back on the right track under Emery. This isn’t to have a go at Wenger either, he’s the man who saw their talent and believed in it enough to make them first team players, but maybe an indication that young players these days probably need a more instructive coach to help them thrive.

When you look through the team, I think you could say that others have improved too. Alexandre Lacazette, Petr Cech, Rob Holding, Granit Xhaka and possibly even Henrikh Mkhitryan are more effective this season with the Spaniard in charge. Offsetting that is the difficulties he’s had to get consistency from Mesut Ozil and Aaron Ramsey, so it’s not all perfect and there’s still some way to go this season before we start handing out the C Montgommery Kroenke Awards for Outstanding Achievement in the Field of Excellence.

For a bit more on Adidas, here’s their CEO on how he feels the Arsenal brand has under-performed globally and why they think this is the right time to get on board with us. He looks very much like a friendly CEO who doesn’t remind me at all of a cross between a baddie in a Die Hard movie and Hank Scorpio, so that’s good.

Finally for today, if you use the Interlull to get away from Arsenal, or you require some external entertainment, let me recommend a book to you: French Exit by Patrick deWitt. You might know him from previous books such as ‘The Sisters Brothers’, but this is a very enjoyable, pleasingly surreal read and will certainly help pass some of the time until football begins again.

Right, that’s your lot for this morning. I still haven’t remembered what it was I was going to write about, but if inspiration strikes at nighttime again I will make a note of it. *

Back tomorrow with a podcast, and whatever else is going on. Until then, take it easy.

*I won’t. I never do despite many times lambasting myself for not doing it. You don’t even need a notebook and pen these days. These so-called ‘smart phones’ have apps which allow you to write things down. You could even text the idea to yourself to have a permanent record of it. Oh well.