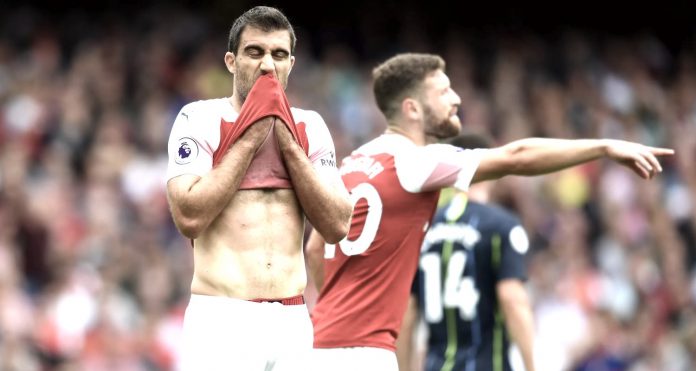 We’re now ten games into the 2018-19 season, and looking at the table shows Arsenal sitting in fourth on 22 points, two behind third place Chelsea, while Liverpool and Man City are a further two beyond them on 26.

We’re better placed than I thought we were going to be – the 22 points from 24 that we’ve taken since the Chelsea defeat have been an excellent return. Even if people have scoffed at the calibre of opposition and a relatively easy run of fixtures, you still have to go out there and do the business and we’ve done that. Sunday’s draw with Crystal Palace was disappointing, but I also don’t believe anyone can have been that surprised by the fact we dropped a couple of points based on what we’ve seen from the team during this run.

The generosity we’ve shown our opponents has been apparent to anyone with a working pair of eyes, and it’s also there in black and white when you look at the top four and how many goals they’ve conceded this season:

You don’t need to me to tell you how much that stands out. In terms of goals scored, City have 27, Liverpool 20 and we’re on 24 with Chelsea, so despite our issues with the balance of our front four or whichever attacking set-up Unai Emery uses, the big problem we have is at the back and how many we’re letting in.

For me that worry is compounded by the fact the run of games we’ve had and the opposition we’ve faced. I know five of those thirteen goals came in our first two matches, which somewhat distorts the total, but we’ve also ridden our luck at times thanks to profligate opposition and had our goalkeepers, Petr Cech and Bernd Leno, to thank for making very important saves at crucial times. Even against Palace on Sunday they inexplicably missed the target from close range in the first half, and I’d be very, very surprised if this wasn’t the key area of concern for Unai Emery.

Of course he’ll be thinking about how to get the best out of Pierre-Emerick Aubameyang who is scoring goals but looking a bit lost on the left. Does he give him a run up front now that Alexandre Lacazette’s form has stalled a bit? Can he get consistency from Mesut Ozil and more from Alex Iwobi who has improved but needs to add end product to his game? Henrikh Mkhitaryan, Danny Welbeck and Aaron Ramsey are all nice options for him to have, but this is the best kind of problem for any manager – how to use a surplus of attacking talent.

The other problem is how he makes his team more defensively secure, and as yet he hasn’t quite found the solution. The introduction of Lucas Torreira has certainly helped, and it’d be unfair not to point out that injuries to Sokratis, Nacho Monreal and Sead Kolasinac have had an impact on how we’ve had to set up in the last couple of weeks. An injury to Hector Bellerin, over which there’s no real information yet, may complicate things further because his replacement, Stephan Lichtsteiner, hasn’t been entirely convincing. His shit-housing may endear him to people and may well be the way he’s always played, but in this league it’s something he has to do because the 34 year old legs find it hard against younger, much quicker and mobile opponents.

There’s definitely a need to address left-back in the medium term, with Monreal heading for 33 and in the final 12 months of his contract, as well Kolasinac’s underwhelming tenure at the club thus far, but the centre of our defence must be the main area of concern for Emery. Sokratis has been ok but his injuries haven’t helped, while Rob Holding appears to be making some progress and looks to have his manager’s faith.

Shkodran Mustafi is robust at least, almost always available, but his season has been pockmarked with mistakes, bad decisions and poor performances which might be something you could coach out of a young player, but he’s 26 – not some youngster just starting out. When he make the kind of errors he does at that age, and when he makes the same kind of errors that surely somebody must have taken him aside and spoken to him about by now, it’s hard to believe that suddenly it will all click and he’ll come good.

In a way, I feel for Emery because he would have had minimal input into our transfer business last summer. The decisions about where to bolster our squad we’re made by Sven and Raul and I think they’ve left him short at centre-half, if not necessarily in numbers but definitely in quality. I know we have two players on the way back from spells out, but we have yet to see how a 33 year old Laurent Koscielny will recover from what was a significant and traumatic injury, and the last time we saw Dinos Mavropanos he was getting sent off at Leicester in May. People might have high hopes for him, but right now that’s all they are: hopes.

I too hope that he’s gem unearthed by Sven and his team of scouting minions, but until we see him play more often it’s impossible to say. His relative lack of playing time in pre-season may well have been because Emery wanted to see more of his senior options, and that would be understandable, but perhaps it’s because he doesn’t feel he’s quite up to scratch just yet.

So, in stark contrast to the plethora of quality and talent the manager has at the top end of the pitch, he’s got something of a rag-tag bunch at the back right now. I’d quite like to see Sokratis and Holding given a run together because at this point it feels like the best pairing we’ve got, and if Koscielny can return and put some pressure on them then all well and good.

However, Sven and Raul – despite his dislike of the January window – would be doing Emery, the club, and themselves a disservice if they weren’t scouring the market for a January purchase. It is more difficult, no question, and maybe we’ll have to wait until summer to get the player we really want, but if the ambition is to get Champions League football back, it’s going to be a tougher job to do with Europa League defenders.