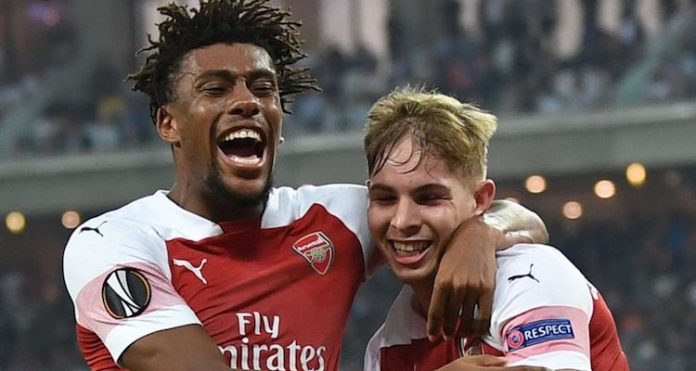 After winning your eighth successive match, it seems a little churlish to point out the flaws in our game, but it would also be remiss of me not to do that if we want to analyse things properly. However, that can wait because first and foremost we need to accentuate the positives and winning eight in a row is unquestionably a very good thing.

Surprisingly, Unai Emery changed his formation going with three at the back. Sokratis was flanked by Rob Holding and Nacho Monreal, with Stephan Lichtsteiner and Sead Kolasinac as the wing-backs, and the Greek international opened the scoring after just four minutes, nippling the ball home from close range after Monreal had headed a corner towards goal. We had two hairy Flaminis in midfield in the shape of Guendouzi and Elneny, and Welbeck started up top with Alex Iwobi and Emile Smith Rowe in support.

Those two in particular deserve some spotlight this morning, because what we’re seeing is a kind of rebirth for the former as he looks stronger and more confident by the game under Unai Emery, while the latter has previously shown he’s a real talent, did so again last night, and got his first Arsenal goal to boot. They’re both products of our academy, coming through Hale End from a young age to make it to the senior team, and there’s always something a bit special about seeing a player do that.

We’ve seen plenty of Iwobi, obviously, but as someone who was subjected to a lot of criticism, it’s good to see him shake that off and while we seek to understand what Emery is doing with this team, his progression this season really is one of the bright spots. Smith Rowe looked smart and dangerous in the first half, almost scoring from a Sead Kolasinac cross but he couldn’t quite get enough on the ball to steer it in at the back post. Eight minutes into the second period though, and he’d made his mark. Welbeck won a header, Iwobi took it on, rolled the ball into his teammate’s path, and the finish between the keeper’s legs showed real composure.

It was a great time to score too, because despite making a half-time change when Lucas Torreira replaced Nacho Monreal and we reverted to a back four, the home side were on top. They’d had a couple of shots, and a goal disallowed for offside, so it was a very timely moment for the us to get a goal because after that, although they had some moments, they didn’t enjoy a sustained period of pressure again.

We brought on Ozil for Smith Rowe, Lacazette for Iwobi, and should have made more of the chances we had to score again before Guendouzi grabbed his first goal for the club. He fired in from the edge of the box after a good break and a Lacazette pass, and that was the game. Welbeck missed a late chance to ice the cake, again Lacazette was the creator and the Frenchman might have scored himself right at the death but miskicked after Ozil had fed him seven or eight yards out.

So, another win, another clean sheet, and the momentum continues. I know people are a bit divided about the way we’re playing. Some will say winning while not playing particularly well is a good sign, and I understand that, and I’m thoroughly enjoying the fact we’re capable of doing it. Others will say if you continue to give up that many chances in a game, eventually someone is going to make you pay, and as much as I dig the fact we’re winning, I’m a little more on this side of the fence than the one which focuses almost entirely on the results.

A positive aspect of it is that it’s given our goalkeepers a chance to showcase their talents. Like Petr Cech has before him this season, Bernd Leno played a significant part in keeping that clean sheet last night with a string of good saves. There was one in the first half which saw him get down well at his near post, and aside from what our keeper did, Qarabag failed to make the most of good opportunities. The ease with which any team can get in behind our defence has to be a worry, and better players than the ones we’ve faced in recent weeks will undoubtedly punish us for that.

Even Sokratis expressed some concerns after the game, saying:

That’s from a man in the thick of the action, so if he’s saying we’re riding our luck at the moment, who are we to argue? It’s a curiosity of this winning run. By any standards eight victories in a row is nothing to be sniffed at and the team deserve credit for that, but whitewashing an obvious problem – and allowing the opposition that many chances is an obvious problem in my book – does nobody any good.

Perhaps the back three was an attempt to address our defensive frailty, but I’m not sure it worked and Emery clearly wasn’t convinced if he gave it just 45 minutes. I think he and his coaching staff have got some serious thinking to do about this issue, and the sooner they find a solution the better because we’re proving capable of scoring goals, so if we can add defensive parsimony to the mix we’re much more likely to take points from more difficult fixtures, or on days when we can’t quite find our shooting boots.

Now though, the focus turns to Fulham on Sunday, and how much – if at all – the travel will affect the team. Emery seems to be a manager who, at the moment anyway, sees continuity as more beneficial than rest, hence using Ozil and Lacazette, and bringing the likes of Bellerin and Xhaka with the squad rather than leaving them in London. He’s a manager well versed to the challenges of the Europa League schedule though, so hopefully he knows what he’s doing.

For now, I’ll leave you with a brand new Arsecast, chatting to the Man from East Lower about the Qarabag game and all the rest, and we get some insight into Raul Sanllehi from Dan Hilton of the Barcelona Podcast. Download/subscription links below, enjoy the show.

The importance of a good number two