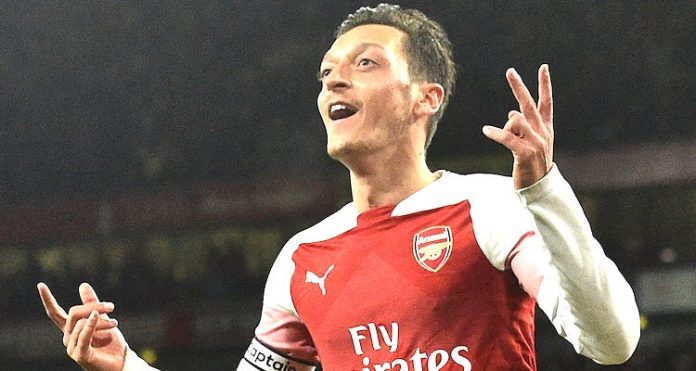 As the club’s top earner and highest profile player, he’s very much in the spotlight almost all of the time, and I think it’s fair to say that when it comes to his form he hasn’t been playing anywhere near his best for quite a while. Some put it down to the signing of a new contract in January, a player resting on his laurels now that he’s got the biggest pay packet of his career.

I think that’s a bit simplistic, but I suspect Ozil himself would admit that he hasn’t played as well as he knows he can for some time. There’s more to it than a new contract though. The final months of Arsene Wenger’s reign were a bit of a mess, let’s not ignore that. If Ozil didn’t play well, neither did anyone else really, and the team was shambolic, lurching from one dismal away performance to another.

Then there was the World Cup, the fallout from his retirement from international football after his claims of institutional racism within the DFB, the reaction to his statement and the way it was continually misrepresented by people within German football and particularly some of the players who I’m sure he would have considered friends. There were attacks from high profile figures in the game back in Germany, and the fury of that sizable minority who can’t see racism because they exist in a world where that’s simply not an issue for them and they lash out because of that.

Then Arsenal changed everything with Wenger going, Unai Emery arriving and needing to treat everybody the same way as he imprinted his authority and style on the club, being played out of position in a system which has taken the players some time to come to terms with, that training ground bust-up which despite denials did happen but which may not have been a negative all things considered, and it’s little wonder that if you’re going through a relatively fallow period anyway it might take you some time to come through it because of all that.

Against Leicester we saw the talent and genius of Mesut Ozil on display for the first time in a long time, and it was great. Of course we all want to see it more often, we want to see greater consistency, and I think we need to see something akin to that in the games against the bigger teams – but the next few weeks gives the playmaker a chance to do that because we face Liverpool and Manchester United (and Sp*rs) relatively soon.

However, you have to hope that what we saw on Monday night was Ozil turning a corner, finding his mojo again after what has been a difficult time personally and professionally. It was unquestionably a consequence of playing him in his best position, and one would hope that Emery now has enough evidence and motivation to keep him there. Perhaps the issue was fudged by the Aaron Ramsey situation with the head coach looking to keep the Welshman happy so he’d sign a new deal, but with the withdrawal of the contract offer, there’s no need to do that anymore. He can commit to the player who has a long-term deal with the club, rather than try and squeeze them both into his side.

I also think that Emery deserves some credit for the revival of Ozil. Maybe it was a culture shock for the player to discover that he wasn’t going to get the same treatment he got under Wenger where he was indulged because of star status and the then manager’s willingness to manage him with velvet gloves. The new man hasn’t entirely been iron fist, but he’s ensured that his reputation, his wages, his Twitter count and all that, means nothing when it comes to picking his team.

He’s left Ozil out, he’s taken Ozil off, he’s brought Ozil to the farthest reaches of Europe to bring him on as a sub in a game we were never going to lose, and shown him that he’s  important but no more so than any other player. And can we now say that the former Real Madrid man has responded to that in a positive way? He looks happy in training, he reignited the spark against Leicester, and on that basis Emery’s management of him has worked a treat.

At the same time though, the Spaniard been sensitive to the needs of a man who has been struggling. During the summer he spoke more than once about how Arsenal would be like his family, a shelter from everything else that’s was going on and some of that was really very unpleasant. He made Arsenal a haven from it, and provided him with the public support that should have been forthcoming from elsewhere but very noticeably wasn’t. Considering their relationship was so new, it was both humane and smart, and I think Ozil’s inclusion in his five captains was also a clever move.

For me – and maybe it’s because of my age or because I’ve grown up with a different idea of captaincy – Ozil wouldn’t be an obvious candidate for the armband. Even though I like the idea of collective responsibility before putting it all on one individual, he’s not the kind of character I’d naturally go for. However, it was a nod to his seniority, a challenge in some ways for him to show some leadership because of his talent and reputation, and even if you’re a superstar in the world of football like Ozil is, there’s an honour and pride to wear the armband of a club like Arsenal and to lead the team out.

By any standards, that was a captain’s performance on Monday night. You want that guy to take the game by the scruff of the neck, to impose himself, to lead by example? He did that, and how. And to me the thing that stood out most of all is how much Ozil enjoyed it, as if he’d had a burden lifted from him and knew he’d turned something of a corner in terms of his form this season.

As I said, he now needs to show consistency, and both he and the team have to show they can go toe to toe with the other teams in the top six, but that looked much more like the Mesut Ozil we all want Mesut Ozil to be, and hopefully we’ll see a lot more of him in the weeks and months ahead.