It is difficult to be a committed football player and a committed fan of a football club. From childhood, the two strands are almost mutually exclusive to one another. At some point in adolescence, as one’s interest in football blossoms, one must prioritise between playing and watching- between being a fastidious player or a fastidious spectator.

One of the most underestimated barriers to becoming a professional is that you have to sacrifice a lot of your childhood- particularly your teenage years- and dedicate yourself to your craft at a young age. Most 13 or 14 year olds are not capable of making this kind of clear headed, far sighted decision. Whilst their friends chase girls and stand beside off licenses intimidating strangers into buying fags and booze, the future professional is either training hard or resting up.

Once the adolescent boy, possibly encouraged by his or her parents, makes the commitment to chase their dream of professionalism- so being a fan of a club goes out of the window. Saturdays are spent playing, weeknights training. It makes it impossible to completely commit oneself to club fandom, beyond a cursory glance at the final score after your own 90 minute pitched battle.

Because of this dichotomy, the fan that becomes a player is a rare story indeed. It is often said of Islington born Charlie George that he jumped off the North Bank and onto the pitch, but he freely admits that he was perfectly willing to join Tottenham when his Arsenal love affair went sour. Arsenal fan Ashley Cole attended an Arsenal Soccer School at the age of 8, but was receptive to the advances of Chelsea.

In this context, Carl Jenkinson playing for his beloved Arsenal is a genuinely heart-warming story, not least in the cut throat environs of the Premier League. The fact that Jenkinson was plucked from relative obscurity made the tale all the more romantic. He had spent time on loan at Welling United and Eastbourne Borough from Charlton in 2010. By June 2011, he was an Arsenal player.

The signing surprised Jenkinson and his family as much as it surprised us. Carl describes how he and his father leapt up and down in celebration outside of Arsene Wenger’s office when he signed the contract that summer. Jenkinson had attended the 2010 Emirates Cup with his dad as a fan, he played in the 2011 edition wearing the number 25 shirt. Jenks chose number 25 because Nwankwo Kanu was his favourite player as a kid.

Even when the number 2 shirt became available in the summer of 2013, the right-back turned it down in continuing homage to the Nigerian. Shortly after his signing, a photograph emerged of Jenkinson in his childhood bedroom, complete with Arsenal bedspread, curtains and wallpaper, clutching his prized 1999-2000 away shirt, with 25 KANU emblazoned on the back. 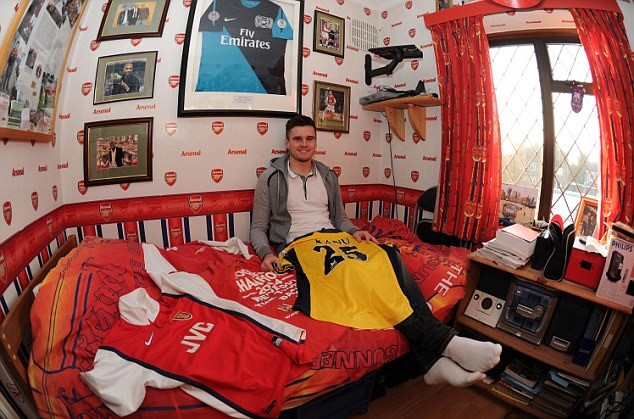 During the summer of 2012, the club commissioned a series of marble stones outside of the Armoury (the official merchandise store), which supporters could buy complete with an engraved message of their choice. The next time you are there, look out for the one that says, “Granddad, Hope you’re proud. Carl Jenkinson”, in tribute to Carl’s Arsenal supporting grandfather. 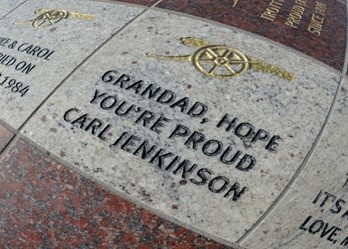 With such steadfast credentials, Carl instantly became a cult hero for Arsenal fans. He was a little rough and ready at the start, thrown into a team and a squad reeling from the departures of Fabregas and Nasri, but slowly he began to settle. It is true that in his seven years at the club- two of which were spent on loan at West Ham- he was not quite up to the standard required.

His Arsenal career will be remembered less generously than it ought to be. When Bacary Sagna broke his leg twice in quick succession in 2012, Jenkinson proved to be a fine replacement. He even won a full international cap and was on the pitch when Zlatan Ibrahomovic scored an impossible bicycle kick against England in November 2012.

I think the trope of “player as fan” will overtake his legacy to the point that everyone will forget that there was a time when he looked at home as an Arsenal squad player, if not quite a fully- fledged member of the starting XI. That his Gunners tenure has extended for more than four years past his last Premier League appearance- when he scored against Norwich City in May 2014- will count against him ultimately too. Since then, his injury history has been troubled.

He was convincing enough at West Ham to earn a second loan spell before rupturing his cruciate ligament. Once he had recovered from that, he dislocated his shoulder on loan at Birmingham, causing a further delay in his career development. History will probably remember that he held on for dear life at Arsenal, but his body let him down at crucial stages of his career path. History will forget that in service of the myth.

Carl Jenkinson is Arsenal’s answer to Brooks Hatlen. He’s institutionalised now and will do anything to stay at London Colney. pic.twitter.com/yiCo1uX4Ud

With a run in the side at right-back, Jenkinson looked very promising for a while. Yet the “fan turned player” narrative will see this forgotten. It is probable that he will be remembered merely by this epitaph. That’s actually quite a difficult label to handle. As fans, we probably lived vicariously through Jenks more than we did other players and none of us dreamed of being a not quite good enough back-up right-back.

But as the frustration of the latter end of the Wenger era took hold and the club have struggled to shift players that didn’t develop as expected (as they have undoubtedly struggled to shift Jenkinson), a sense of ennui has accumulated which will probably claim Jenkinson’s legacy too. As such, unkind jokes began to abound and he was occasionally cast, if only in jest, as some kind of lucky competition winner or mascot.

Personally, I believe that someone’s best performance shows you the true measure of their ability and Jenkinson’s best performances were very good- good enough for international recognition. From there, it becomes a question of how often you can touch the ceiling of your talent. Jenkinson hasn’t managed it often enough or recently enough to salvage his Arsenal aspirations.

He had a little of the non-league footballer about him. His running style put one in mind of a Playstation footballer when you bash the accelerate button. Nevertheless, in his days haring up and down the line for Eastbourne Borough and Maidstone United, he cannot possibly have expected to represent his boyhood club to the very highest level.

His one and only goal for the club, a toe poked finish against already relegated Norwich in an end of season dead rubber, is an image to make even the steeliest cynic crack a smile. Understandably delighted, Jenkinson celebrates like a man possessed; as a poorly executed knee slide on a dry, bumpy pitch curtails his celebration with a slight air of farce.

At that moment he probably suspected this would be his only ever Arsenal goal. Right-backs are hardly the most prolific scorers and deputy right-backs even less so. He seized the moment and held onto it for all it was worth, as if he was in his back garden soundtracking the moment with his own commentary. He probably shouted “KANUUUUUU!” as he applied the finish.

Professional football is no fairy-tale and Jenkinson’s Arsenal dream is surely close to its conclusion as he ramps up his recovery from yet another injury. Jenks has earned his chance to live that dream for a few years, which puts him in a very unique and enviable position.

Andy Kelly, Mark Andrews and myself will be doing some promotional events in London for our book ‘Royal Arsenal- Champions of the South’ in the run-up to Christmas, with book signing events featuring the likes of Liam Brady, Bob Wilson and Brian Talbot. You can find out more about those events here and you can buy a copy of the book here.