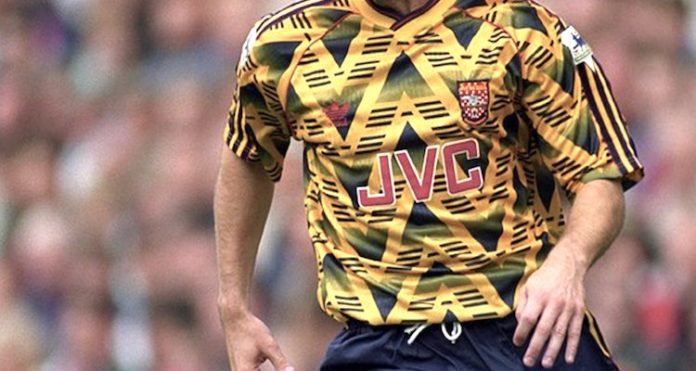 If you were to ask the average person if they would like a bruised banana, they would most likely say no. Bananas are best when not bruised, and I think that the same kind of thing applies to most fruit: we prefer it when it’s not on the turn or there are dark squishy bits in it.

Ask an Arsenal fan if they’d like a bruised banana next season, and the answer would undoubtedly be yes. For those that don’t know what I’m on about, it refers to the away jersey produced by Adidas in the early 90s. It is very much of it’s time, missing only the little acid house smiley face on each nipple, but over time it has come to be considered as a classic.

You can see it here, beautifully modelled by a certain Ian Wright, right? Right! A man who plundered many a great goal in that shirt, and the relevance of this is that from next season onward Adidas are going to be our kit manufacturers when the current deal with Puma runs out.

I’m sure there are some clever people working for them who might have taken the temperature of recent Puma kits and launches. Remember the toe curling bumph that accompanied the launch two years ago – ‘We are THE ones riding our motorbikes with Petr Cech’s helmet’ (reminder here if you have)? Who can forget the new colours they invented for our away shirts like ‘Irradiated pond scum’ or ‘Dead ozone layer blue’? Having started strongly, Puma’s designs and colour schemes have been getting worse each year, and there aren’t too many tears being shed that their deal is at an end.

If Adidas have any marketing sense, they’ll go traditional. As red and white as possible for home, and some variant of the classic yellow and blue for the away hit. If they feel like recreating the bruised banana, I suspect they’d be onto an absolute goldmine but we’ll have to wait and see what they come up with.

As someone who is not exactly their target market and not someone who generally buys the shirts, the most important part of this new deal for me is the fact that there’s a big increase on what’s being paid at the moment. The Puma deal is worth around £30m a season, Adidas will pay something in the region of £65m, so that’s a considerable increase, and hopefully that money will be made available to the recruitment team and might go some way to offset the prospect of leaving tens of millions of pounds on the table because we’re letting valuable players leave on a free because we haven’t managed their contracts properly.

There’s a bit more background on how the deal came about over on Arseblog News, and it really has been interesting to see how excited people are about this. For some what we look like on the pitch doesn’t matter too much, for others it’s a really important part of how we operate. The kit is part of our identity, and I do understand that.

To me there’s nothing quite as Arsenal as the kits I grew up. The classic red and white shirt, made from material that would now feel like you could insulate an attic with, and the yellow and blue from the 1979 FA Cup final is seared into my brain as the very essence of Arsenal. The colour combination works so well and with it I can see Liam Brady with his socks around his ankles, Alan Sunderland wheeling away having just scored the goal to win the cup, and those are associations I don’t think I can ever shake.

Conversely, when I think of Arsenal in blue away shirts the first thing that springs to my mind is Robbie Fowler scoring a four minute hat-trick against us at Anfield. I know we’ve had some moments in blue over the years, but in general seeing us in that colour just doesn’t sit right with me. It’s the football kit equivalent of drinking orange juice just after brushing your teeth. It’s like waking up and seeing in the newspaper that William Gallas and Mikael Silvestre are set to take over as the new Arsenal management dream team. It’s like all music ever has been replaced by Phil Collins doing an earnest ‘SOME TWAT’S GOT TALENT’ version of Tracy Chapman’s Fast Car.

[As an aside, do you have this problem with buskers in your town? Dublin has many issues but none as serious as the fact that every single busker on Grafton Street is now amplified and they all do that whiny voiced bullshit where they stand there with their wispy beards and do a slow acoustic version of a Robyn song turning something upbeat and fantastic into something so miserable you wish they’d been born with hideous paws so they couldn’t play the guitar, the wankers].

Anyway, the point is I’m not a fan of Arsenal in blue shirts. Gimme that yellow, Adidas. Gimme the blue shorts, those I can deal with, but once that blue creeps above the waistline we’re going to fall out. You can’t win the Premier League with a blue away shirt, the evidence is compelling: 1989, 1991, 1998, 2002 (sort of), 2004 (oooooh, I love that shirt), so if Adidas want to help us to success, they know what to do.

Just a quick thing to finish up with: we’re in the very early stages of planning some updates to our apps for iOS and Android, and we’re looking for feedback, feature requests and suggestions as we get underway. If you have any, please leave a comment on this post on Arseblog News, and that will become our repository for ideas etc. It may be a case that almost everything is covered already, but just in a case, take a look and we’ll see what we can implement.

It’s likely to be the new year before we really start, but if that sounds a long way away, it isn’t really. Just a couple of months, so please feel free to give us your ideas etc.

That’s it from me for now, more tomorrow.