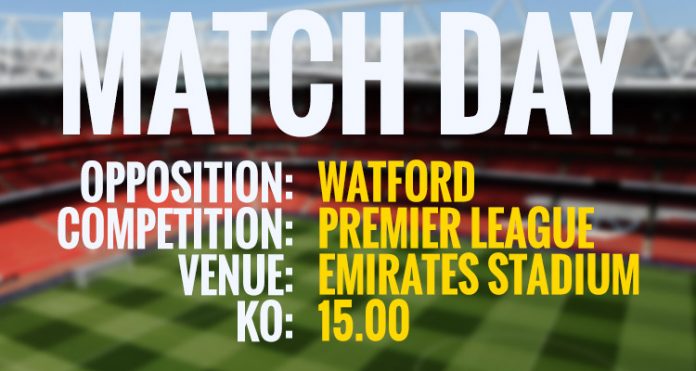 The battle for a place in the top four continues today as we look to leapfrog Watford, currently in fourth, from our position of sixth. The Hornets have had a good start to the season but a draw and a defeat in their last two games shows they’re doable, although they’ve had some success against us in recent seasons and there are obviously reasons to be cautious.

Unai Emery’s team selection today will be of interest, not simply because of the Aaron Ramsey stuff (more on that later), but because of general concerns about the balance of our front four, as well as the fact players like Danny Welbeck, Henrikh Mkhitaryan and Alex Iwobi are pushing for inclusion too.

My suspicion for today is that he’s not going to change very much about the team that beat Everton 2-0 last weekend. Sokratis is fit again after picking up a dead leg in that game, and up front I think it’ll be Aubameyang, Lacazette and Ozil with Ramsey in that role Emery seemingly prefers him in but which doesn’t really get the best out of him. If we were away from home, I think one of Ozil or the Welshman would be sacrificed, but at home it’s a case of getting all his big guns on the pitch.

We’ll see in due course what exactly he does, and ahead of the game the Spaniard outlined his ideas:

We want to find our goals in different ways, but also with our tactical style. One option is to work in the second action because the opposition team haven’t given us the chances to pass out because of their pressing. for this reason want to continue improving and creating our best performances with different ideas.

There’s a curious thing about his communication, in that he seems to be very open, very willing to discuss his plans and his tactics, but because he’s still learning English and the intricacies of the language, what he says tends to sound like a collection of little soundbites that sort of make sense but often leave you scratching your head a bit.

Anyway, we know Watford are dangerous and the fact that we’re still struggling to find defensive cohesion makes almost any team we face a bit of a challenge. We allowed Everton to get behind us far too easily and far too often in our last game, so it would be a sign of some progress today if we were able to tighten up and deny them the same kind of clear cut chances – because we can’t expect Petr Cech to save us every week like he did last.

That, on top of a brighter first half, like the one we saw against Brentford in midweek, would be very welcome. Even though I think we created more in the second period on Wednesday, we came in at the break 2-0 up and could be reasonably pleased with what we’d done rather than trying to figure out how to fix it. It’s a good chance for three points today, more progress in terms of results and our league position, so let’s hope we can do the job.

Right then, the Ramsey stuff continues to dominate the conversation, and Emery did his best not to talk about it in his press conference yesterday, but expanded on the situation a bit more when sitting down with the print journalists. Concerns that the situation might negatively affect the player were shot down:

I don’t think the situation will affect his performances. I just want to give him and the players the most stability so that they can be focused only on the games.

And there was some basic common sense thrown in too, about players careers and moving on from clubs:

I have known and I’m going to know this same situation again because the football career for a player is very short. They are professionals for 10, 12 or 15 years but not more and they need to take the best performance and also work very hard in these years for their future and their family’s future.

Personally, I don’t think Ramsey is the kind of character who would coast through games, it’s just not who he is, and while we can debate the level of his performances – like every other player by the way – I don’t think you can question his commitment. If he plays, he’ll give us 100%.

The question is: if he’s going to leave, do you need to make yourself a bit less reliant on him? Leaving him out altogether, as I’ve seen some people suggest, is cutting off your nose to spite your face. He’s a talented player who can make a solid contribution to our season, but in this system we have options for the right hand side which would see Mesut Ozil move more centrally, and perhaps that’s the way to go. It’s a tricky situation for the new boss, but I’m sure he’s had more difficult things to deal with in his career, and he’ll find a solution.

Also, in reference to yesterday’s post, and a subsequent Tweet I made about Ozil’s wages becoming a benchmark, let me just clarify that point:

The £350,000 a week we gave Mesut Ozil is now the benchmark for any player negotiating a new deal.

You can’t blame Ramsey or anyone else if they look for significant increases when you pay someone that much, regardless of their reputation or ‘star quality’.

I was not saying that Ramsey should get £350,000 a week. I wasn’t comparing Ramsey and Ozil as players or as brands or their reputations or achievements in the game. I wasn’t blaming Ozil for anything. I was merely pointing out that when you raise the top wage at any football club, there’s a knock-on effect which will see every player and every agent look for increases *relative* to that top wage when they come in to negotiate a new deal.

I thought that was pretty obvious, but some of the responses to that Tweet were astonishing to me. From being castigated for blaming Ozil (I didn’t) to being called racist (I obviously wasn’t, but WTF?), so many people got the wrong end of the stick, or chose not to understand it for different reasons. I’m on record here and on the podcast countless times saying that I like Mesut Ozil as a footballer, but there’s a strange cult of social media who think any criticism of him is unacceptable.

Some said you don’t see players at Barcelona use Lionel Messi’s wage as a benchmark, which I understand but then if Mesut was contributing that much that consistently it’d be a very different discussion. Since signing his new deal, I don’t think we’ve seen anywhere near the best of the German, and while there are mitigating circumstances (club going through change, Wenger’s last months were pretty miserable domestically, his back injury etc), you can’t use Messi to back up your Ozil stance.

Hopefully we can find some way to get more out of him, because if we do we’ll become a more dangerous, creative team, but simply making the point that paying Ozil that much money has caused some ripple effects in terms of how we’ll have pay other players is not a criticism of him in any way.

Right, we will have a live blog for you later on, so if you can’t see the game later, you can follow it on your phone, tablet, computer etc. Simply open this page in a browser, and updates will begin automatically with team news an hour before kick off. We’ll also have all the post-match stuff on Arseblog News so you can catch up with the report, reaction, player ratings and all the rest there.

Catch you later for the game, and if you haven’t had a listen yet, this week’s Arsecast with Philippe Auclair is good for your ears.