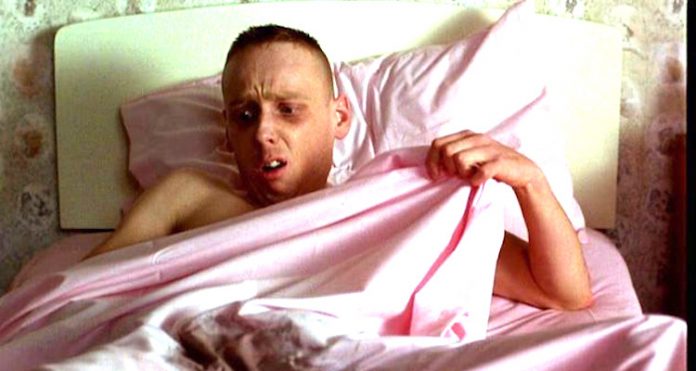 We’re six games in to the season and yet to keep a clean sheet. This is, despite four wins in a row, a little bit of a worry. Sitting here this morning writing this, I have no idea where that stacks up against previous seasons, so I’m going to do some live research (which is only live for me, you’ll see it as just regular research).

I can’t really be arsed going back any further than ten seasons, but suffice to say a clean sheet is a bit overdue at this point. In games like Man City and Chelsea, where our defensive organisation was nowhere near as solid as it should have been, you can find some mitigation. New manager, first games, top class opposition, but subsequently we’ve faced teams we should be more than capable of holding out against – not least Thursday’s game against FC Vorskla – and we’ve pretty much done a Spud from Trainspotting.

It’s one thing someone else dirtying up your bed linen, but the goals we conceded against Cardiff, Newcastle and in the Europa League were pretty avoidable and those sheets now need to be taken to an industrial cleaners. Or better yet just burned because there’s no getting those stains out after we soiled them ourselves.

If you haven’t listened yet to Amy Lawrence on the Arsecast from yesterday, you should anyway, but she makes a point about how things are so ingrained in the make-up and psyche of this club after 22 years of Arsene it’s going to take time for Unai Emery to get the players to relearn certain things. Defensive instability runs through us like the writing in a stick of rock, it’s part of our DNA, and even the arrival of a new manager and new players isn’t any kind of instant fix.

Of course people will look primarily at the defenders and the goalkeeper, but the Spaniard sees the issue as one for the collective. Asked how he planned to improve our defensive record, he said:

First, the confidence with our defensive players. Second, working tactically to be more compact. But not only for the defensive players but for the whole team, the whole 11. With this process I think we also need time, but it’s our first disappointment from the first games of the season. We need to improve this.

He also highlighted the goal we let in against Newcastle as one that could be relatively easily avoided in the future:

For example in the match against Newcastle we didn’t concede a lot of chances, and the goal that we conceded in the last minute is something we can work on. It’s something where we can give them the mentality so that it doesn’t happen again.

Yesterday was different because after we scored four goals, the team relaxed a little and conceded one or two goals.

Can I get a CONCENTRATION?!

Can I get a MENTALITY?!

Simple things that we can all see, but it’s amazing how often and how relentlessly they need to be drilled into football players. It’s blindingly obvious to say ‘Don’t switch off, track your runners’ etc but, especially late in games with tired legs, it’s something we see time and time again – and not just at Arsenal, by the way. Which is to say it’s almost impossible to eliminate those kind of mistakes completely, but ensuring they’re kept to a minimum would go a long way.

It’s why I hope Lucas Torreira is fit and ready to in the Premier League now. The Uruguayan has been bedded in slowly after his late return from the World Cup, but he clearly brings more natural defensive qualities to our midfield than any of the others. Both Mohamed Elneny and Matteo Guendouzi are energetic, but they’re players who provide us a passing option, the ability to keep and recycle possession quickly, while I think we’d all accept that the defensive part of Granit Xhaka’s game is not exactly his strongest.

Aaron Ramsey is being played further forward so doesn’t really come into this particular equation, which leaves Torreira as the man to make a difference in a key area of the pitch. When I looked at our defensive roster this season, and their individual qualities, it always felt to me that they’d need some help to make them more solid, and the recruitment of an actual defensive midfielder felt very deliberate in that regard.

Of course they can improve as a collective with more coaching and instruction, but Torreira could be a little bit of a force-field to offer a bit more protection. Every player has defensive duties, but looking at our personnel if you were to ask me the best way to make our back four better in the very short-term, it’d be the regular deployment of our number 11 (a weird number for a DM but then the world is weird and this is small fry in comparison).

Just a word on Sokratis before I go: like many I was a bit concerned about him based on what we’d read about his form at Dortmund, but he’s been quietly impressive in the last few games. It’s good to see but I do think we have to take the calibre of the opposition into account here. It’s one thing sliding into tackles to dispossess Boris Borisovski of FC Vorskla, but quite another when you’re facing superior opposition in the Premier League. I hope he can keep up the upward trajectory in his performances, because you can see how he and Laurent Koscielny could form a good partnership, but it’s a bit early to make definitive judgements about him or anyone else just yet.

Right, that’s your lot, I’ll leave you with the Arsecast, happy listening, and I’ll be back tomorrow to preview the Everton game and all the rest.