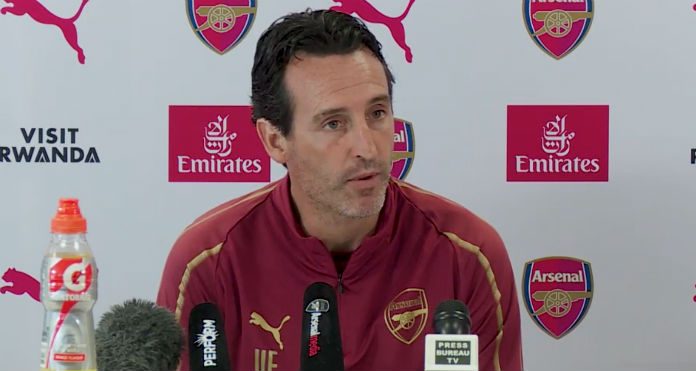 Morning all and a very happy Friday to you.

Unai Emery faced the press yesterday as we gear up for tomorrow’s trip to Newcastle. He’s desperate to pick up where we left off before the Interlull…with another three points.

While the players and manager were keen to keep the defeats to City and Chelsea in perspective, the victories against West Ham and Cardiff will have done wonders for squad confidence and we now have seven very winnable games in quick succession across three different competitions.

By the middle of October, we’ll have a much better idea of where we stand with Unai Emery and his ‘process’.

Naturally, the Spaniard was quick to stress the team will approach the challenges game-by-game:

“Firstly we need to win and I think it is very important that in the last match we won.

“Our aim away at Newcastle on Saturday is to keep improving things and continue to create our idea, build up our spirit on the pitch, individually and collectively, and it is clear this process is one process.

We’ve no new injuries to report. Alex Iwobi returns from illness and the medical team confirmed that both Ainsley Maitland-Niles and Sead Kolasinac are slightly ahead of schedule as they work their way back from a fractured fibula and knee problem respectively. We’ll see them in October. Laurent Koscielny is still on course for a November return.

On the late returnees from international duty, he said:

“The training in the afternoon is the last session. We are going to work with four players. They played on Tuesday, it is Xhaka, Lichtsteiner, Welbeck and Sokratis and I want and I hope that they hope that they come back well and prepare for the match in Newcastle.”

Newcastle beat us on home turf as recently as April and they won’t be pushovers but I genuinely feel they are a team that are there for the taking. Like Cardiff, against whom they recorded their only point of the season, Rafa Benitez’s side are not a possession football team. They’ve completed only 65% of their passes, mustered only 12 shots on target in four Premier League games and are currently 18th in the table.

That coupled with our defensive shortcomings makes me think we should throw caution to the wind and go for the jugular. Like last time out, I hope we play Lacazette and Aubameyang up front and give Ozil and Ramsey the keys to the midfield. I think we’ve all been impressed by Guendouzi, but, assuming his calf is fine, I’d like to see Torreira take over alongside Xhaka. That’s more out of curiosity than anything else, I guess his assist in Cardiff has whet my appetite.

Emery was coy on who might get the nod, admitting that its taking time to find the best balance.

“It’s a process to know the combination on the pitch, with different players but I need and I want to start in the level, 11 players with good performances and also, we need in the balance of players, when the team needs to work in the pitch to help the team to find the win, to stay with the performance.”

Fatigue shouldn’t be an excuse for most of the players. By my count, 12 of the first team squad trained as normal during the Interlull, a decent number for Emery to work with. One of those was Mesut Ozil, who in light of his international retirement has a lot more time on his hands. Inevitably, Emery was again asked about his relationship with Ozil and for an update on the player’s current state of mind.

“The reason for Mesut is important for me also, this focus every day with us, a relaxing three days off at the weekend. Mesut, like other players, works very well here and also working the ties and also together to improve things. Mesut, I look at him with the focus totally here.

“The first time, maybe, he could feel different [missing Germany matches] but every day with us in the work, I look at him and he looks well and happy, working with our demands every day.”

In a later sit down with journalists from the print press, he outlined his eagerness to squeeze more from the former Real Madrid man.

“I want to find with him the possibility to do the best, to make decisive passes, to do more near and in the box to score

“He is working for the team to help us with his quality. But he is feeling like I am feeling. He can improve, he can do more. We will work, we will help him, give him the possibility on the pitch to be together, to find his qualities for us.”

It’s actually five years to the day since Mesut registered his first assist in Arsenal colours. That was for Olivier Giroud against Sunderland at the Stadium of Light in 2013. Interestingly, trips to the North-East have been few and far for the German since then, as Amy Lawrence points out, he’s actually missed all four games at St James’ Park since he moved to the Emirates.

Nacho mentioned earlier in the week that he was talking to the club about a new deal. It’s something that Emery supports having been impressed with his compatriot since arriving in the summer.

“I can say that I am very happy with him because he is 32 years old but I think physically, with his performances with us in matches, he is playing with a very good level…I think we need to find a new contract with him to stay with the Arsenal team.”

Few players in my time supporting the club have won over the doubters as fully as Nacho. Ray Parlour, perhaps? He struggled with English (Nacho…not Ray) when he first arrived and with Kieran Gibbs still full of promise, it looked like he’d never be more than a steady squad player. He’s now played for us 215 times and reinvented himself as a serious goal-threat with regular well-timed runs into the box and tidy finishing. I love me some Nacho.

After a swell of stories on Thursday about Ivan Gazidis joining AC Milan, it was inevitable that Emery would be asked about the man who appointed him less than four months ago. Unsurprisingly, the coach gave short shrift to the line of questioning, not once, but twice.

The second time, he said:

“I answered this question and every conversation with me is speaking about us. About our performance. About our ideas. Our process. Then, for his future we didn’t speak. I think it’s one question for him.”

I suspect that privately, Emery has his concerns about the situation. Unless there’s an internal appointment, not only will he have to earn the trust of whoever replaces Gazidis, he’ll know that Sven Mislintat and Raul Sanllehi are in a similar boat. Ideally, you want that triumvirate as focused on football matters as possible. That said, as I wrote in yesterday’s post, I’m not convinced Gazidis will be a big miss.

Recommended reading…Tim Stillman scratches his head over Danny Welbeck’s contract situation and ponders how best to make use of the England striker.

And listening…James from Gunnerblog hosts an Arsecast Extra asking ‘Time for Torreira, Please?!’

Tom will be on duty here tomorrow and I’ll do my farewells on Sunday before Blogs’ triumphant return from Spain. Until then, you can catch me on Arseblog News.