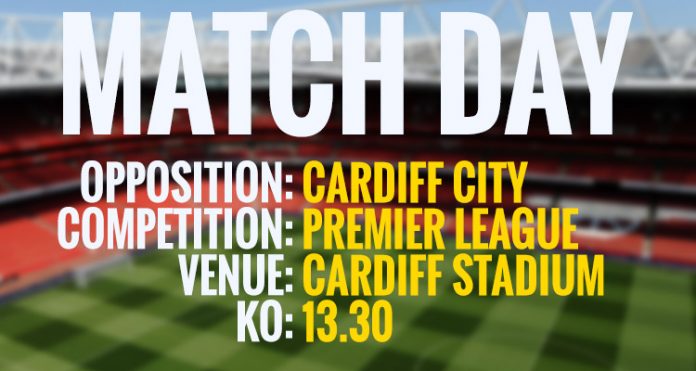 Arsenal face Cardiff today away from home, looking for a second win of the season to take us into the international break with three more points. Our away form last season was poor, in stark contrast to what we did at home which was really very good but lost in fog of Arsene Wenger’s end game and the dismal performances on the road.

Unai Emery is not thinking about that though, he says:

Now it’s not to think about the past, I prefer to think and my concentration with the players also is the next match – focus only to work, to work, to work for the next match and how we can win. It’s clear the data behind us but I want to write a new data, a new present, a new future with Arsenal, with the players. For that my focus is only how we can win this Sunday.

The boss has some decisions to make about his team today. Will he recall Mesut Ozil after his absence last week? Is it time for Torreira in midfield? Will Alexandre Lacazette get the start he’s been pushing for? In each case, somebody else would have to make way. Matteo Guendouzi for Torreira; Aaron Ramsey for Ozil; and most likely Alex Iwobi for Lacazette with Aubameyang starting out wide.

I’m not sure what he’s going to do, each team selection so far has come with a little bit of a surprise and it’s hardly a shock that a man who has been in charge for just three games is hard to predict. I suspect we might see two of those changes, with Ozil starting from the bench as Ramsey continues in the role the German most naturally fits.

I can’t see any changes at the back or in goal, so it’s all about what he does and how he feels his team need to be set-up to face what will be a physical Cardiff side today. When Wales boss Ryan Giggs expressed concern over Ramsey facing a Neil Warnock side just before the internationals, the Cardiff manager said he rated the midfielder highly but that:

I hope we can rough him up. Needs must.

And if that applies to Ramsey, you can be quite sure it applies to every single Arsenal player. Rough him up, leave one on him, let him know you’re there, the reducer – not particularly subtle code for deliberate fouling, and all we can do is hope that the foolishness of making that kind of approach public is something today’s referee, Anthony Taylor, takes note of. And that there’s nothing too nasty.

Of course there’s a physical side to football, it’s something fans and players enjoy, but there are lines you shouldn’t cross and Warnock’s comment about Ramsey is a none too subtle throwback to the ‘Arsenal don’t like it up ’em’ stuff the likes of Sam Allardyce used to peddle. Leaving aside the fact that nobody likes it up ’em, the very real consequences of that attitude – and the fact it was widely reported without any real repudiation in the mainstream media – are evidenced in the broken limbs of Eduardo, Abou Diaby and, of course, Ramsey himself who had his leg snapped by a brutal Ryan Shawcross challenge in 2010.

It is down to the officials to manage the game, and I don’t really believe there are players these days who go out to inflict serious damage on fellow professionals, but I just worry that when you’re fired up with a stop them at all costs attitude then someone might be inclined to go in a bit harder and a bit later than they normally would. Hopefully that’s not the case.

This is a game in which we’re likely to have a lot of the ball which should suit our attacking talent. There’s a lot there to cause Cardiff trouble, and today would be a good day for Pierre-Emerick Aubameyang to find his shooting boots because he’s overdue a goal based on the chances we’ve created for him so far this season.

The worry is – and it’s one that will only dissipate when we see Emery’s approach make us more defensively solid – that we’re vulnerable to counter-attacks and having lots of the ball and dominating territory means that’s probably how Cardiff can best hurt us during this game. As the players get to know the system better, as they learn to coordinate the press and how to react when it inevitably gets bypassed, we should see a side better able to cope and one which doesn’t leave wide open spaces the way we did against West Ham.

It would be good if today is a day in which we see some progress in that regard. Of course it’s still early days in the season, but fixtures like this one did us so much damage last season it’d be nice to see a solid performance and a good win today.

Remember, if you can’t see the game, we’ve got you covered with the live blog which provides up to the second live text commentary, goal clips and more. Bookmark this page and updates will begin automatically. We also push important moments, goals, cards etc via a dedicated Twitter account @arseblog_live – so follow that if fancy too.

We’ll have a report, player ratings, reaction, stats and all the rest on Arseblog News after the game too.

Right, time for some breakfast, a long walk with the dogs, and I’ll catch you later on for the match.