An unexpected and long-lost mood befell me this week. Typically, when considering matters of Arsenal Football Club, I am beyond eeyorish – an adjective that refers to AA Milne’s fictional pessimistic stuffed donkey – and enters the psychological realm of the human stuffed donkey. Like, I don’t know… Roberto Soldado or perhaps the uberdonkey himself, Moussa Sissoko. Yes, that’s it. A new word is coined: The adjective for a feeling of continual, glass- half-empty sadness is sissokoish. The long-lost mood was that of effervescence.

The fizz is temporarily back in my bottle of Bolly. You know why? VICTORIES. Lovely bubbles of victory, six of them, stretching back to the end of August, and all the while playing like half of the chaps have barely tipped hats at each other. Strategies are being tried and rejected like a hen party in the changing rooms at Mrs. Top’s Shop; cast on, examined in the mirror, and then thrown into a heap in the corner. It is the very amorphy, the shapelessness, and the half-time oscillations that make this six game sweep such a pleasure. It isn’t working, yet it is working.

Certainly what we are seeing on the pitch bears little resemblance to what Mr. Emery proffered in early interviews. What we have seen over the past six weeks resembles something akin to an etiolated pre-season period. Experimentation, inspiration, the offering of chances to those perhaps consigned to glove butler obscurity. The placing of the world’s best number 10 on one wing, one of Europe’s great strikers on the left wing, our tenacious quick- footed, line-breaking, fire-extinguishing mini-shithouse on the bench and our number 8 in his normal deep-lying, front-lying, central wing free-roaming position. It is another crumb of comfort that Mr. Emery has no more clue about where Mr. Abdoulaye Ramsara goes than Mr. Windsor.

The score agin the toffees flattered us indubitably. Yet there it is, two nil against a team who quite fancied coming, if not at the King, then perhaps a viscount, or a baron. That’s right, Everton. AYO, LESSON HERE BEY. YOU COME AT THE VISCOUNT, YOU BEST NOT MISS, as Mr. Shakespeare wrote in his play A Midsummer Night’s Wire.

Luckily, they did, but not before severely testing us in the first half. This is another defining feature of Arsenal’s season start; the gentlemanly first half, in which Arsenal appear to be hosting a polite drinks reception, with lesser teams given something of a head start. After you! No, after you. No, I insist! Please, do try the wide open space behind our fullbacks. And perhaps you’d like to sample the lack of coherence in midfield? It’s delicious. And you simply MUST have a glass of this cheeky little red, CHATEAU NO SHOTS. Happily, we come out at half-time with a machine gun and annihilate them, so all’s well that ends well. 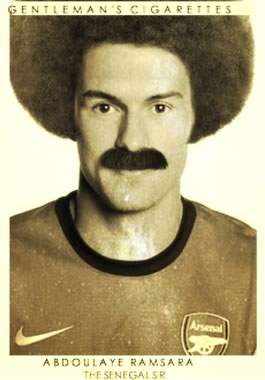 To Mr. Ramsara then. It seems that he is to depart the club if not in January then in the summer. We are now to witness our longest-serving player become our very own latest version of Miss Rowling’s Nagini. As Harry Potter fans know, she was a Maledictus cursed to transform into a snake. I say to you cast not such calumnies on him, for he is no serpent. He is a good player, certainly, but if after ten years we still don’t know where to put the bugger on the pitch then perhaps it is for the best. It will be more irritating than the departure of Samir Nasri, who now lives in a glass tank, feasting on frozen white mice in Antalya following his doping violation, but less so than Mr. Percy or Mr Fabington. I feel the team may very well be better off without him and I wish him well.

The final word then to extraordinary Pathé footage of Mr. Harry Bell, our right back, running through a hedgerow. In Mr Chapman’s day he would have been placed in solitary confinement for a week and then publicly birched.

Let us hope that he redeems himself against Fat Troy’s Hornets tomorrow.