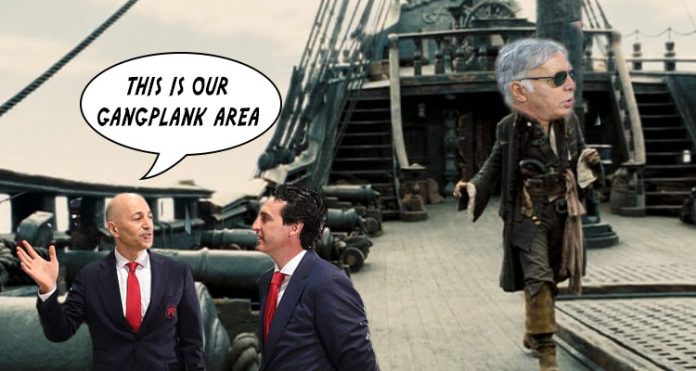 There’s a curious thing about Arsenal at the moment. On top of all the other changes we’ve seen in recent times, the way games fizzle in and then fizzle out is quite interesting. I don’t mean to use the word fizzle in a derogatory manner either.

There’s nothing, then a fizzle of press conference + game + post-match reaction, then a fizzle out to almost nothing again. This really is in sharp contrast to the Wenger era when there seemed to be so much more going on on a day to day basis.

I don’t know if this is because of what I touched on yesterday, in that it’s hard to have discussions about things when we’re still trying so hard to figure out what’s going on, or something else. Perhaps it’s that we got so tied up in the soap opera of Arsene Wenger over the last few years that things seemed to resonate for much longer.

Again that’s not to be negative about the former boss but simply to be realistic about how all-encompassing his presence was. They say no man is bigger than the club, but one man can become so intrinsically linked with a club that it’s practically impossible to have any conversation about the institution without it involving him. I can’t even begin to count the number of times in the last few years when I’d meet someone, tell them what I did for a living, and then have them ask: “Well, are you Wenger in or Wenger out?!”

There was as much discussion about him as there was about the football. Everything Arsenal did was viewed through Arsene’s Prism©®, and even if you took a more rounded view of what was going on, the extremists at both ends were always there driving an argument that was circular. A never-ending cacophony of discord which must be some version of hell for those who have to endure it.

Thankfully, for most reasonable people it was possible to exist without exposing yourself to it too much, but you always knew it was there. A background hum of anger and self-righteousness from people who literally had nothing better to do than to argue with strangers on the Internet all day, every goddam day.

That’s gone now. And that’s a good thing. It’s not to say people who enjoy arguing all day long have found something better to do. I don’t think that’s the case, they’ve simply jumped on board different vessels. I sometimes see those aboard the SS Emery – with its crew of those who will defend the man and the club to the very hilt and will hold no truck with any criticism of anything ever – but the majority have just left port on a passenger liner that might well be the QE2 or, perhaps, the Titanic. The journey has just begun.

It has left us in a less busy place, some might say a more reflective place, as we see land disappear behind us and we head for open seas. I don’t quite know where this metaphor is going in a football sense, but the sea is beautiful and majestic and filled with wonderful creatures, but it’s also powerful and scary and there are deep sea fish that look like they can give you cancer with a flick of their tail which also has their eye on it, so it’s all ahead of us.

I think that’s what I’m saying, and it’s to highlight that this morning, after a good win in the league on Saturday and our first Europa League game coming up on Thursday that there is very little going on at Arsenal from a football point of view this morning.

At board level though, it looks as if things are going to change as I was told yesterday that Ivan Gazidis would be leaving the club to take up the role he’s been linked with at AC Milan for months now. As I’ve said here before, the idea of going through a transfer saga over a chief executive really doesn’t interest me at all. We’ve been through enough of those with people who really matter for this to register, but you have to say that the whole thing has been a shoddy mess from all concerned.

This story began much earlier in the summer, at first it was denied, then acknowledged, then we had that statement from Arsenal which made nothing clear at all, and complete silence from Gazidis himself which was curious after a period in which he couldn’t wait to get out in front of the cameras and talk and talk and talk.

At a time of seismic change to have this kind of instability at board level, as well as the complete inability – or unwillingness – to address it properly as a club has been a bit embarrassing really. Obviously Stan and Josh had other things to concentrate on as they hoovered up Usmanov’s stake and then bought up the rest of the shares from small shareholders, many of whom did not want to sell.

I can also understand why, from the Gazidis side of things, silence was the best option. There’s a lot to work out with a move like this, terms of his departure, gardening leave, his new package at AC Milan (with some points in the club apparently), but none of it reflects well on the people who are supposed to be guiding this club in the right direction at a turbulent time.

Lest we forget, KSE’s pledge in their takeover document was:

Perhaps this is all simply part of that process. We’ll see more stability when Josh Kroenke comes in, which is what I’m told will happen. I suspect we might see Raul Sanllehi take more responsibility for football matters at board level with Kroenke Jr more business focused, and there’s no question that the make-up of the Arsenal boardroom will be very different in 12 months time as KSE put their men in to replace some of the old guard. You’d expect nothing else when they take 100% control, that’s the way it goes in every other business so why would we be any different.

Whether it’s going to be the beginning of a new KSE era, in which the ambitions they can so easily trot out in a document are matched by the kind of investment it will require to realise them, remains to be seen. You wouldn’t blame a person if they had a more cynical, perhaps pessimistic outlook than that, but as our football ship heads for open waters, so too does our executive vessel.

The Dread Captain Kroenke and his merry crew of reprobates and ne’er-do-wells will be steering our course back towards the promised lands of the Premier League and Champions League. Or, at the very least, a continued increase on the investment as commercial and broadcast revenues continue to increase the overall value of the asset.