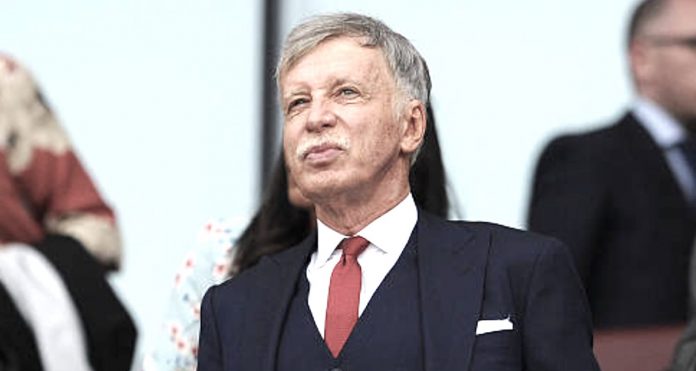 No sooner had I finished yesterday’s blog and headed out with the puppy for a walk, my phone started buzzing with the big story: Alisher Usmanov had agreed to sell his stake in Arsenal to Stan Kroenke, a move which will ultimately give the current majority shareholder 100% ownership of the club.

I can’t say I’m particularly surprised. It was always going to be difficult for the Russian to find a buyer for his shares, especially as whoever bought them would be faced with the same situation he’s had for years. No place on the board, no representation, no influence, and while there are many rich people in the world very few have the best part of £600m to throw around to own 30% of something they can do nothing meaningful with.

Even a buyer with the best of intentions, someone who could claim they’d work cooperatively with Kroenke would be frozen out, because why would the American cause himself the hassle of any potential interference at board level? Unless Usmanov could buy Kroenke out – something he tried unsuccessfully to do – then there was only ever going to be one outcome in the long run, and yesterday was it.

Not that it matters now I suppose, but back in August 2016, after we ran a story on Arseblog News to say he was considering selling, Usmanov released a statement which said:

Contrary to some speculative media reports, Red and White Holdings would like to state that Mr Alisher Usmanov does not intend to sell his stake in Arsenal Holdings PLC (“Arsenal”). Mr Usmanov continues to be committed to Arsenal and considers his stake in the club as a long-term investment for his family and future generations.

We can only speculate as to why he’s decided to sell now – whether it’s to invest elsewhere, the current climate for Russian businessmen in the UK, or just general acceptance that he can make a large profit on his initial investment – it illustrates how things can change, and also how we as fans need to be wary about what billionaires say. The future Usmanov generations will have to live without Arsenal shares, how sad for them, but Arsenal fans who have held shares for years will now be forced to sell up because this deal is going through.

So, bearing Usmanov’s change of position in mind, you’ll forgive me if I remain somewhat cynical about the words of KSE when they made their statement to the stock exchange. The funding of the deal is outlined here:

The Offer is not being funded by way of any debt finance (bank loans, payment in kind loans or other debt or quasi‑debt interest bearing obligations) for which the payment of interest on, repayment of, or security for any liability (contingent or otherwise) will depend on the business of Arsenal.

Perhaps some feel comforted by this part of the statement, but once Kroenke has 100% of the shares, he can do what he likes and service that loan however he likes. Whether it’s via dividends or management fees, he could use Arsenal’s money to do it. I’m not saying he will, just that he could, and when it comes to the word of ruthless, wealthy billionaires, I’m a bit long in the tooth to take them at face value when we’ve seen exactly this situation play out elsewhere.

Also in the statement, KSE outlined their ambitions for the football club on a sporting level:

Under KSE’s stewardship since 2011 the Club has invested in major transfers, player contracts, analytics, senior non-playing football management employees, building the Club’s global brand and fan-base, and the stadium, training facilities and Club offices. KSE expects the Club to build on those investments and to continue to invest in London Colney and Hale End to ensure the Club stays at the cutting edge of sporting high performance through player preparation, training, conditioning and youth development.

KSE looks forward to an ambitious and successful 2018/19 season for the first team squad under the guidance of our new Head Coach Unai Emery and Academy Manager Per Mertesacker.

Lovely stuff, and I don’t know how anyone could argue with any of that really, but never once since he arrived at the club have I got the sense that sporting success is a key driver for Kroenke or KSE.  I just hope that there’s a realisation that in order to do the things they want to do, to properly and consistently compete for the Premier League and Champions League, we’re going to require a greater level of investment than we’ve seen up until now. I think over the last few years they have spent on players, big money signings last summer and in January are of course very welcome, but to bridge the 33 point gap to the champions of last season, and to first get back into the Champions League and then build a team which can realistically compete for it, we’re going to need more.

Or, at the very least, we’re going to need to work a lot smarter. Like many of you, I’ve been encouraged by the new structures put in place, but perhaps this week has shown us there’s a lack of cohesion in our recruitment strategy. Players were targetted and brought in before we’d even decided who the new head coach was going to be, and this week Unai Emery has decided our defence requires something different from what we’ve got. Calum Chambers has gone on loan to Fulham just weeks after signing a new deal, and we’re frantically trying to sell Lucas Perez and Danny Welbeck to raise funds for a reported move for another fairly average centre-half.

To make progress we need to use our resources as well as we can, there needs to be a clear strategy when it comes to recruitment in tandem with the head coach/manager, and on top of that it feels like we’re going to need an injection of transfer funds from the owner, and I’m not sure that’s how Kroenke operates. To me it’s all well and good saying you have those ambitions, but taking those words off a page and making them reality will require something different than we’ve seen from KSE until now. You guess as to whether we’ll get it is as good as mine, but I wouldn’t put the mortgage on it. I’m open to being surprised though.

Generally, the prospect of one man owning Arsenal outright has felt inevitable for some time, but it doesn’t make it any less disappointing now that it’s happened. On a purely emotional level I think it’s a shame. I don’t say this as any fan of Usmanov whose background has always left me uneasy, but whether it was him or Kroenke or someone else, my feelings about it would have been the same. The plurality of ownership and the ability of individuals to own and feel part of – even a small part – of something important to them was a good thing.

But we all know what football is like these days. It’s big business. The sport, the finances, the media and broadcast rights, the sponsorships, the commercial revenue, the tours, branding, marketing, merchandise, and all the rest have turned fans into customers – fleeced from every possible angle. Some it is down to choice, but whether you’re a season ticket holder or someone who has to take out an increasing number of subscriptions to watch your team on TV, they know they have a captive audience.

People just love their clubs. They love their team. We can jump through all kinds of hoops to justify the money we spend, to overlook the indiscretions of our owners, the behaviour of players and plenty more because ultimately we care about those 90 minutes when we’re consumed by the sport and the desire to see us win a game of football. Then the next game, and the next game. It is what it is, few of us are blind to it, and we carry on as long  we want, but for some I think yesterday will be a breaking point and you have to respect that.

In the very short-term I don’t think very much will change. Kroenke already had control, he could do what he wanted, although the small measure of accountability and transparency at least provided some checks and balances. I assume the AGM will no longer be a thing because it’s not needed when there’s only one shareholder, and we’ll only see behind as far behind the curtain as we’re allowed.

Although yesterday’s statement said ‘KSE has no intention to change the composition of the Arsenal Board as a result of the offer’, I’d keep a close eye on what happens there in the weeks/months ahead. I suspect that we’ll see quite a number of changes at board level, perhaps Josh Kroenke taking more control than he has right now, and some of the current members departing to be replaced by KSE appointments. The Ivan Gazidis situation remains up in the air but the expectation is he will be going. Reports that he has to give Arsenal a year’s notice did the rounds yesterday, but it doesn’t mean Arsenal can’t release him from that commitment. My bet is the Arsenal board today will look very different from the one place 12 months down the line.

The last thing I’ll mention today is the timing of this announcement. I realise how complex and difficult massive financial deals like this are, but it felt deliberate that it came just days before the start of the new season. A reminder to us that for all the change we’ve seen, the positivity of a new coach and new structures being put in place, the arrival of new players in a timely fashion, one man controls this football club and we’d best not forget it.

To me there’s no doubt this has changed the mood among fans. Of course we can separate what happens on the pitch from what happens at board level, but it doesn’t mean we should be ostriches with our heads in the sand when something as momentous as this happens in the history of the club. I sincerely hope KSE and Stan Kroenke fulfill all the ambitions they have for Arsenal. They have an investment to protect as well, and success on the pitch would ensure we become even more valuable. However, I’m reminded of that Alex Ferguson quote:

When an Italian tells me it’s pasta on the plate I check under the sauce to make sure.

KSE’s statement is good sauce, but we’ve yet to see what’s underneath, and that’s the worry.

For some extra listening, we did a bonus Arsecast yesterday reacting in almost real-time to the takeover news, so to hear me chat to James, Tim Payton of the AST (who as an organisation called yesterday a ‘dreadful day for Arsenal‘), and the one and only Ian Wright, check out the podcast below.