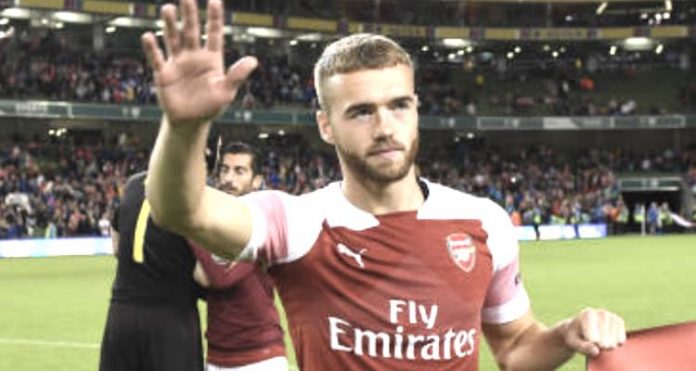 The pre-season games we played have allowed Unai Emery to get to know his players a bit better, and with less than a week before the season starts, he appears to have decided that the centre of our defence isn’t quite up to scratch.

That is the only explanation I can find for allowing Calum Chambers to go on loan to Fulham, and as to why we’re being linked with Croatian international Domagoj Vida. Let’s start with Chambers though. Just last month the 23 year old signed a new long-term contract with the club, and the new head coach sounded effusive about him, saying:

I’m delighted Calum has extended his stay with us. He played an important role last season and will be part of my plans this season.

Bear in mind that this was Chambers second contract extension in a little over 6 months – he signed one last November too under Arsene Wenger. Now, I find it hard to imagine that Emery, starting a new job with so much work to do and so many things to get on top of, made extending the contract of a player who had recently signed a contract extension one of his priorities.

Nevertheless, that decision was a show of faith in the player and a reasonable assurance that he’d be part of the first team squad this season. Coming off the back of some impressive performances at the tail-end of last season, I was interested to see how Chambers might develop under Emery’s coaching and organisation. At 23 he has time on his side as a central defender, but now all of a sudden he’s been deemed surplus to requirements, presumably because the Spaniard has concerns about our strength in this area.

Then there are the links to Vida, a fairly average player who has played for average teams throughout his career (he’s currently with Besiktas after spells with Dynamo Kiev and Dinamo Zagreb), who had a decent World Cup for his country. At 29 he’s experienced but splashing out £20m on another defender who will likely have little to no resale value in a couple of seasons seems an odd one to me. Especially when you consider we brought in a player of very similar profile, Sokratis Papastathopoulos, earlier in the summer.

I’d question the planning here and while we all want Sven Mislintat to be the man, I have to say the jury remains very much out for me. I’m encouraged by the signing of Lucas Torreira, and if it was his eagle-eye that spotted Matteo Guendouzi then we may have a prospect on our hands there – but let’s bear in mind none of us have seen him play a competitive game for us yet and we’d be well served not to make any definitive judgement until that time.

Aubameyang and Mkhitaryan are established stars, you don’t need to have Sven’s Magic Inside Info to know they’re good players, while Stephan Lichtsteiner and Sokratis were safety-first picks boxes that needed to be ticked going into this summer. We have to see how his choice for goalkeeper, Bernd Leno, gets on, so it’s not like he’s pulling unheard of gems out all over the place. Vida, his World Cup aside, is hardly an inspiring signing either, one that appears to cement our position as a Europa League outfit.

Back to this defensive issue though: if Emery has decided that his crop of centre-halves isn’t good enough and we’re doing something about it, then I’m glad. I just wonder if better planning earlier in the summer would have enabled us to, for example, spend the best part of £35m on a better quality defender rather than on two journeymen, and then keep our young players to grow and develop alongside that player.

Personally, and I took a lot of stick on Twitter about this yesterday, if I had to move on one of centre-halves it would be Shkodran Mustafi. For one thing, despite the fact his stock has fallen, you’d still be able to get a reasonable fee for him if you put the work into selling him and making it known he’s available. I’m not sure there’s great benefit to us from a £1m loan fee from Fulham for Chambers.

As well as that, I think the German’s game is deeply flawed, and I don’t necessarily buy into the idea that Emery will put everything right. Hurrah if he does, and I’ll be the first to tip my hat to him, but it’s impossible for me to think that the previous manager, along with his coaching staff, didn’t try and iron out some of the issues he displays so regularly. So he’d be the one to go for me, but that’s just my personal preference and I realise not everyone will agree.

I also wonder about who is making decisions in this regard. Was it really Chambers, who Emery was so impressed with just a month ago and who performed well enough during pre-season, that caused him concern? Was this a compromise because the new transfer committee can’t be seen to have made a mistake with one of their first purchases? A case of ‘If you want a new defender, fine, but you don’t get to choose the one who goes’? It’s all very odd.

The other side of this is that we apparently have to raise funds for the purchase of Vida – if he is the man they want – and it looks as if Lucas Perez will be first to go. He’s expected to join West Ham today in a cut-price deal that will see us recoup very little of the £17.5m we spent on him two summers ago. I have no issue with his departure really, he seems like a decent chap and an ok player, but he’s a hangover from Arsene’s scattergun approach to transfers and someone he was told before he signed him wasn’t quite at the level that Arsenal needed.

As well as that, Danny Welbeck has apparently been told he can leave, and you can understand that. With less than 12 months left on his contract it’s either sell now or keep him and lose him on a free. Everton, Southampton and Bournemouth are the clubs reportedly interested, but remember a deal has to be done before Thursday at 5pm if he wants to stay in England.

A final thought: the departures of Perez and Welbeck would leave some attacking gaps in the squad, but I don’t expect any further arrivals. My gut feeling is that Emery will look to use youth as and when needed. Reiss Nelson and Eddie Nketiah would be the main beneficiaries there, and there may well be good news about the former as rumours are circulating that he’s signed a new contract with the club. I’m excited at the idea that some of this squad building involves developing the young talent and giving them a real chance. Nelson, in particular, has attributes many have been crying out for us to bring in via the transfer window, so if he’s given the opportunity he might well fill that gap.

Right, any other news you can find over on Arseblog News throughout the day, and James and I had a good chat about the defensive issues and lots more on yesterday’s Arsecast Extra – check it out here or listen below.