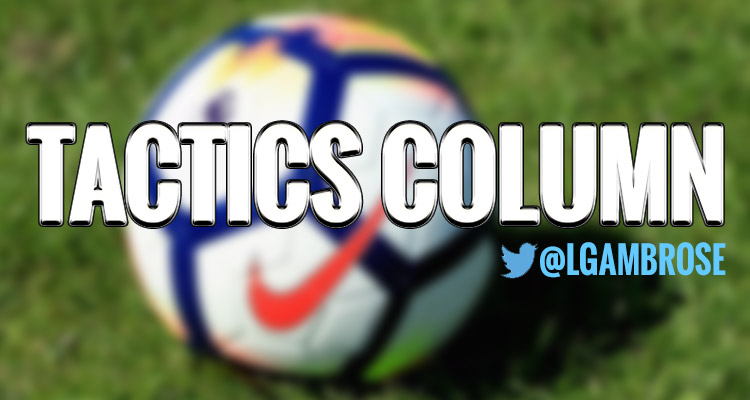 The season is approaching and Arsenal’s pre-season is over. I’ve already had a look at how the team set up without the ball over the course of pre-season (you can read that here) but the approach on the ball has also been noticeably different to under Arsene Wenger.

In recent years under the old boss, Arsenal became incredibly susceptible to pressing. Wenger’s own comments at times suggested he was ok with the gamble of drawing teams upfield and leaving a disproportionate number of players forward as it allowed Arsenal to draw teams out. However, it became clearer that Arsenal couldn’t cope with that and – in away matches in particular – the Gunners badly struggled against teams as they simply couldn’t safely keep possession.

As early as the games in Singapore, there was a marked difference in Arsenal’s attempts to play out from the back. The centre-backs split across the pitch and Unai Emery’s Arsenal form a quasi back three, either with the goalkeeper heavily involved in playing out or a holding midfielder dropping deep to help circulate possession and look for a vertical pass into a more dangerous area. The defensive benefits of this are also clear – if possession is lost, you have a three-man backline rather than just the two centre-backs. 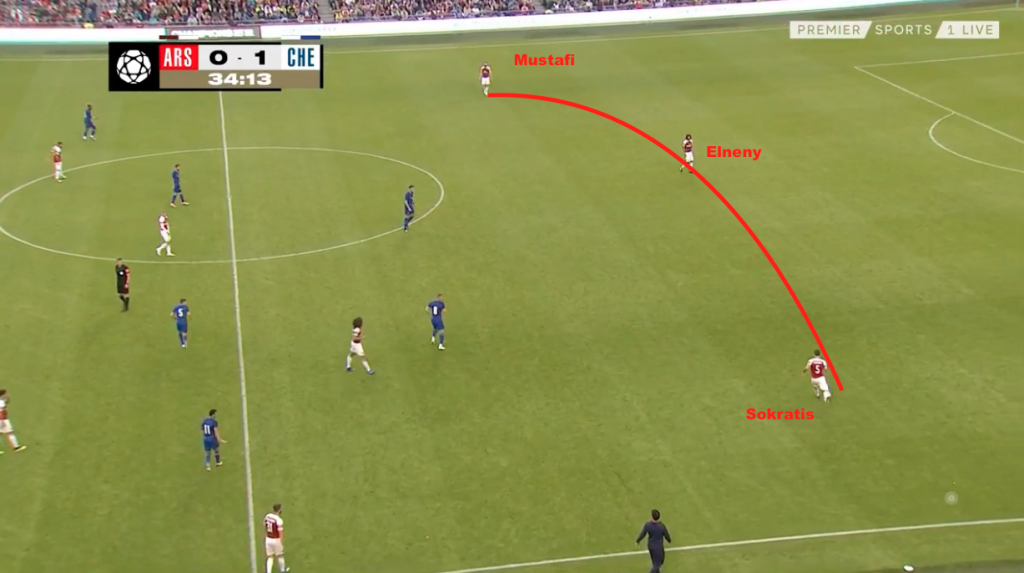 The role of the holding midfielder will most likely be occupied by either Granit Xhaka or Lucas Torreira during the season but was most often (and most effectively) played by Matteo Guendouzi during pre-season. Though it is early to appraise Guendouzi’s abilities and how ready he is for regular football, he seems to have a healthy mixture of Torreira and Xhaka’s abilities on the ball. Like Torreira, he is a fairly tidy and confident dribbler, able to wriggle away from opposition players and either dribble out of trouble or winning a foul. Like Xhaka, he looks to play the ball forward as often as possible, breaking lines regularly with impressive passes into the midfield.

When the season begins, Xhaka or Torreira is likely to play this position and Unai Emery will have to choose which of those two qualities he thinks is more important for his deepest midfielder. Torreira seems likely to get the nod but we could soon see Xhaka there instead; per Statsbomb, the Swiss is “exceptional” at moving the ball forward, progressing the ball into the opponents’ final third more times than every player in the Premier League other than Fernandinho – who plays a similar role for Manchester City – and our very own Mesut Ozil.

One thing Guendouzi did excellently in pre-season was to always move and make himself available for the ball as it was played out from the back. The Frenchman was crucial in breaking opposition pressure as he bust a gut to always provide his team-mates with an option in possession. Like Elneny above he would often split the centre-backs but he also formed a situational back three by moving to the left of the central defenders at times, looking to pick up the ball at an angle to make opportunities for line-breaking passes more likely.

Arsenal’s shape in pre-season has varied depending on the formation and the opposition but seeing the deepest midfielder split the centre-backs has been a consistent feature of play from the back. A 4-1-4-1 similar to the one used against Atletico Madrid is likely to be Arsenal’s most common shape and generally looked like this. 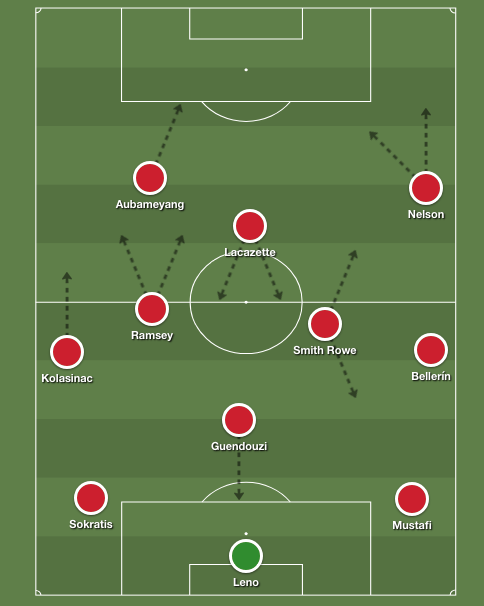 The fullbacks and central midfielders tended to play high up the pitch, offering options to play long vertical passes to find gaps between and behind Atletico’s organised shape. An interesting feature was the movement of Alexandre Lacazette, who often dropped deep into midfield to offer a wall to play the ball off of.

Verticality has clearly been encouraged, with Arsenal looking to suck teams in before taking a number of players out of the game with a pass through the lines. As well as the holding midfielder and the defenders, the goalkeeper has a huge role to play in this, either by playing a vertical pass himself or effectively circulating possession to create the gap.

In the below clip, Arsenal are forced to play the ball back, so decide to draw PSG forwards before using Leno to create a 3v2 situation and then Elneny to create a 4v3. With the numerical advantage, the team easily manage to create some space for Elneny, who can deliver a direct ball to Ozil to launch an attack.

Leno is used to create a 3v2, then Elneny creates a 4v3. Arsenal use the extra man to get Mustafi into space and tempt PSG forward. From there, there's time to pick two quick vertical passes and start a dangerous attack. pic.twitter.com/zBnCVRktFz

Leno’s involvement in the goal against Lazio has been mentioned and was excellent, despite looking simple. Arsenal were patient in possession and provoked Lazio by tempting them closer towards the ball. Lucas Torreira and Granit Xhaka can be seen swapping roles as they look to move their markers until, eventually, there is space for Leno to advance into. He does so and attracts the press, meaning two consecutive quick (but relatively simple) passes move Calum Chambers into space to play out. Chambers also does well, driving on with the ball before picking the right pass as Eddie Nketiah’s movement opens up a gap for Reiss Nelson.

Full buildup prior to the first goal.

Most pleasing thing about this was simply the patience. Especially when Leno had possession of the ball before the attack broke out. Always a key in maximising the spaces to attack in transition.pic.twitter.com/GgvVEUv3cN

And against Chelsea, it was Cech himself who took six Chelsea players out of the game to start a move that very nearly ended with a goal. Credit is also due to Smith Rowe here, as he doesn’t panic but patiently waits so he can be seen behind the Chelsea press. When he receives the ball he’s decisive in his actions.

Our GKs are a huge part of our play on the ball now. Take the 1-0 v Lazio.
Here, Čech's vertical pass takes six Chelsea players out of the game and launches a dangerous attack from nothing. The benefits of building this way are obvious when you manage to play a ball like this. pic.twitter.com/MfwftaCupI

The above clip also sees Henrikh Mkhitaryan earn himself space simply by remaining wide. In the 4-1-4-1, Arsenal’s wide players have been flexible yet disciplined.

In the match against Atletico Madrid, Aubameyang and Reiss Nelson started on the flanks. One would usually hold their width, stretching the opposition backline across the pitch, while the other would take up a more central position or even drop deeper for the ball themselves. With the wide players varying their position well according to each other and the striker, Arsenal have looked less predictable moving forward, occupying a greater amount of the pitch than was customary under Wenger. The intuitive attacking play of yesteryear produced some magical football but we are more likely to see an emphasis on a more structured approach moving forward, with one player always occupying each flank and the movement of the central players geared towards creating space for team-mates to exploit.

It’s easy to imagine Arsenal playing Aubameyang and Özil on opposite flanks and the team naturally morphing into something resembling a diamond shape as the latter drops into central areas and the former stretches the pitch by moving wide or threatening to run in behind. As @ThatGooner points out, we did see similar happen against Lazio as the player playing on the right flank moved inside.

there were a couple of occasions today when we had the mf3 where the RM came inside to form a diamond whilst Auba and Laca occupied the half-spaces (another instance of that later on from the first phase too) pic.twitter.com/YxXx7hAeIH

The idea of occupying the pitch more evenly does not mean the team is rigid. Against Atletico, Emile Smith Rowe frequently broke into the channels as either Reiss Nelson or Hector Bellerin moved infield. At one stage in the first half, Bellerin was released down the right wing untracked as he moved forward and Aaron Ramsey momentarily took his place at right-back (picture below). There’s a clear emphasis on players rotating positions in order to stretch and pull the opposition around – the shape often remains the same but the players are not restricted to remaining in one position. 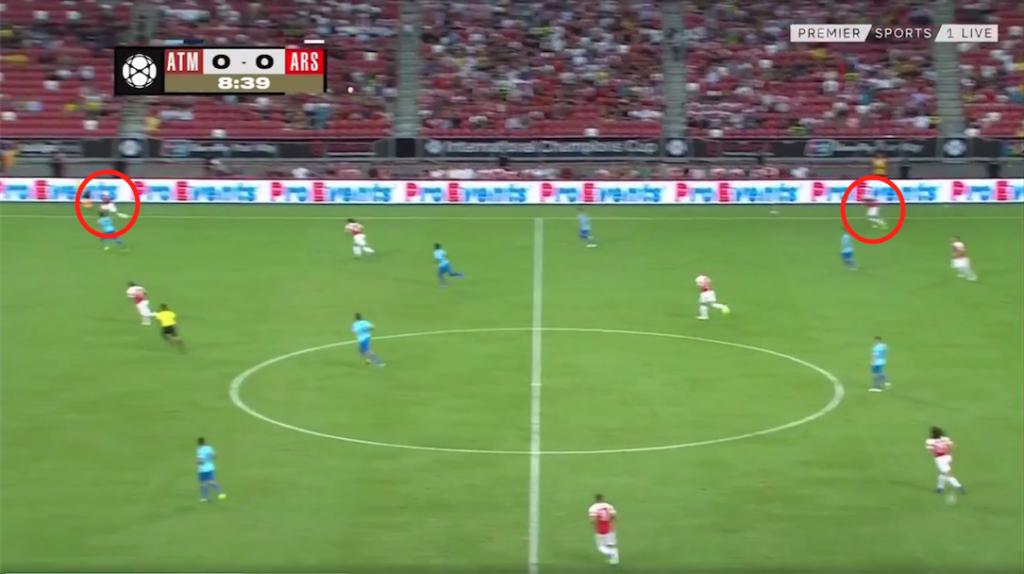 An impressive counter-attack against Atletico Madrid saw all these features coming together. Guendouzi balances risk and reward (with a dollop of luck) to draw Atletico in and a quick release from Leno means Rob Holding has some space to pick a pass. He plays directly to Lacazette, taking seven Atletico players out of the game with a superb ball into the striker.

As the ball comes to Smith Rowe, Aubameyang moves wide to open up space in the middle. At the same time, Nelson sticks wide before moving in unmarked at the last moment.

Risk/reward. Guedouzi almost loses the ball but patient build up draws Atlético in. Just one accurate vertical pass means danger. Off the ball movement – PEA staying wide and Smith Rowe darting in – keeps defenders away from Lacazette. Nelson is free thanks to holding his width. pic.twitter.com/FC9voILWMH

In the past, we have seen similar situations where Arsenal players converge and look to play a number of passes between each other, usually ending with the ball going wide to an overlapping player. At this point, I should point out that’s not necessarily a failed idea (and the above example won’t always be effective) but it’s a significant difference to before.

Movement off the ball is now more defined and more clearly geared towards stretching the opposition and helping team-mates – often the player in possession – have more space to move into. Every part of Nelson’s goal against Lazio was timed perfectly as the teenager waited for Alexandre Lacazette to move inside and create space for Iwobi on the overlap.

With the players we have there shouldn’t be an issue with scoring goals this season. It will, though, be interesting to see Arsenal add more structure to their play in possession. Covering the pitch more effectively should allow us to be more press resistant to keep possession better when we need to. This was a big thing we couldn’t do last season, especially away from home, where pressure was often invited. When we have dour visitors at the Emirates Stadium we should be able to wear them down and our improved discipline and awareness on the break should help us create better chances against the league’s top teams.

There is, of course, a big risk element to playing patiently out from the back. The involvement of the goalkeeper is likely to see Leno get the nod over Cech and it’s possible extended runs in the team for Sokratis and Kolasinac could cause problems, especially if they’re playing on the same side of the pitch as they did in pre-season. Neither player is entirely comfortable receiving possession, though Sokratis is a good and aggressive dribbler should Arsenal manage to shake off pressure before quickly switching the ball to his side.

Patience is needed and there will be kinks to begin with – Manchester City had those in Pep Guardiola’s first season and look how good they are now – but the risk-taking should pay off in the long run. We hope.