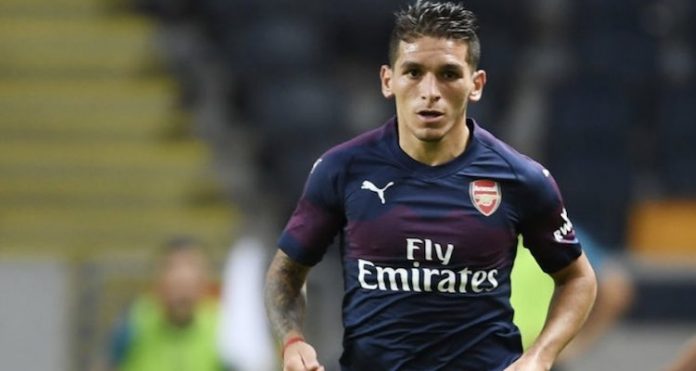 A quick Sunday round-up for you. I didn’t see last night’s game against Lazio, but we finished our pre-season games with a 2-0 win over the Italian side. Reiss Nelson and Pierre-Emerick Aubameyang got the goals. You can find the report and goal clips here.

Once again Unai Emery was quite open about what he was trying to do tactically, and explained why he changed from a 442 in the first half:

You can understand the desire to have a look at a 442, especially when you’ve got two excellent strikers in Aubameyang and Alexandre Lacazette, but if it didn’t work out last night it’s unlikely he’s going to use it against Man City next Sunday.

There were unofficial debuts for Stephan Lichtsteiner and Lucas Torreira, both of whom were given minutes to help get them match fit as quickly as possible, while Granit Xhaka was also handed a start. Emery explained:

It’s a different match today for Lichtsteiner, Xhaka and Torreira. We want to give them these minutes for fitness and also so that they’re working together and tactically can start to work with us. In the first week it’s clear that they’re not at their best physically, but we want to continue working with them and if they are OK physically, mentally and in their performances, and better also than other players who were working with us, we could choose them in the first XI.

The strength of next week’s opposition will certainly give him plenty to think about. If you had a home game against a side not as dangerous and potent as the champions, you might feel inclined to give players you consider important – but who aren’t quite ready yet – a bit of a rest. However, even with their own World Cup players coming back late, we know City are going to be a massive test, so I suspect we’ll see as strong an Arsenal team as possible.

The fact we might go into that game without an established left-back is a bit of a worry as well. After Sead Kolasinac’s injury, which will rule him out for at least two months, Nacho Monreal has arrived back from his World Cup exploits with Spain nursing a knee injury of his own. Emery says:

He arrived with no big injuries, but his knee has a little problem and he’s training everyday but not with us. He’s doing work alone with the physical coach, and running, and we think maybe on Tuesday he can start training with the team.

It’s difficult for him to arrive for the match against Manchester City.

In the absence of both senior left-backs, Ainsley Maitland-Niles is the next option, and while he played well enough there last season, it’s not an ideal situation. His versatility may well prove to be very useful though, and having a player who can slot in in a number of positions adds a depth to the squad that we might well need.

Then there was talk of transfers, and it sounds much more like we’ll be seeing players leave than coming in:

My focus is on the first match and preparing, and not for the window and the possibility to sign another player. Maybe we need some players to leave because we have lots in the squad, but at the moment, my one focus is on our work.

Pretty non-committal there because ultimately that side of things is out of his hands. He will undoubtedly have an input into the decision making, which players he wants and which he deems surplus to his requirements, but the mechanics of doing the deals are not within his remit. That’s for Gazidis (assuming he’s still doing that kind of stuff), Sven and Raul – and you can’t help but wonder if the uncertainty around the chief executive is having an impact on that. You’d hope not, but …

Although Chuba Akpom left for PAOK earlier in the week, there’s still an inflated squad with players who really need to be sold (not loaned). Lucas Perez appears to be one of those, and Arsenal have reportedly agreed a fee with Sporting Lisbon for the Spanish striker – a relatively measly €5m for a player we paid £17.5m two summers ago – but as ever there’s a complication. It’s around wages, with Perez apparently not keen on taking a €1.5m pay-cut, and frankly who could blame him?

Nevertheless he, along with the likes of Carl Jenkinson, David Ospina, Joel Campbell, and Cohen Bramall appear to have little future under Emery, and are squad bloat that we need to move on. The deadline is this Thursday for incomings and sales to other Premier League clubs, but across Europe there’s shopping to be done right until the end of the month, and with so many deals done right at the end of the window, it’s going to get a bit messy I think.

Right, that’s your lot for this morning. I’m back tomorrow and James and I will have an Arsecast Extra for you too. Until then, enjoy your Sunday.