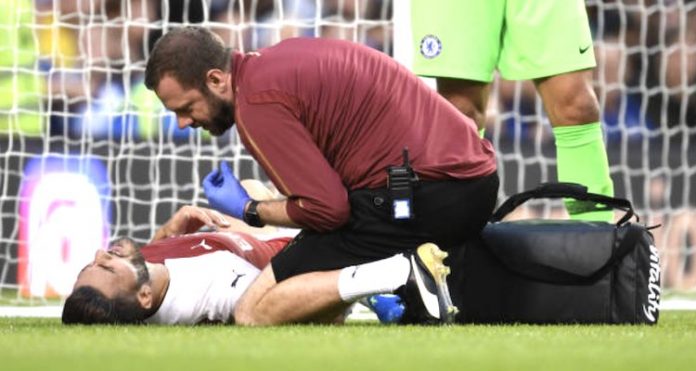 Morning everyone, a quick Saturday round-up for you ahead of final pre-season game against Lazio in Stockholm later on.

We will be without Sead Kolasinac who, having left the field midway through the second half in Dublin on Wednesday night, has been ruled out for 2 months or more with a knee injury. That’s a blow for us in terms of personnel and squad depth, because beyond Nacho Monreal there isn’t an obvious back-up in the absence of the Bosnian.

Of course, Ainsley Maitland-Niles played there last season and could well be a candidate to deputise for the Spaniard, and Jordi Osei-Tutu has been involved during pre-season but primarily plays on the right hand side. There’s also Josh Dasilva, but there are suggestions he’s about to join Birmingham City on loan.

It will probably mean that Monreal will be back in action for the start of the season, despite coming back late from his post-World Cup holidays. These days though, I don’t think it’s quite the same as it was. Summer is no longer a time when players switch off, gorge themselves on pudding and pints, and return for pre-season training to shed all the excess weight they put on.

It might not be ideal, but I don’t really see any reason why Monreal couldn’t be involved against Man City. We will likely see him get some minutes tonight against Lazio to add a little match sharpness. The issue for Unai Emery is how he manages his workload and what he does if Monreal isn’t around.

I like Maitland-Niles and I think he’s an excellent prospect, but as well as he played as a left-back, it always felt like a guy doing his best in a position that’s not his. I can’t see how that would be any different this time around. If part of Emery’s remit is to develop young talent at the club, maybe he’ll have to think his way around this one differently.

Aaron Ramsey won’t be involved tonight either as an update was given on his fitness on the official website. I wonder is this a new style they’re going with: a kind of ‘early 1900s telegram’ thing. On Ramsey:

Developed tightness in his right calf. Continues to be assessed. Aiming to train next week.

And the one on Kolasinac was quite similar:

Sustained an injury to his left knee. Will be out for 8-10 weeks.

Blasted hot here Mary. The insects bite so. My regards to the children.

Anyway, it just shows that with all the best advances in conditioning, high performance, super fitness, mega-toning, hyper-vigour, epic-huskiness and all the rest, that a whack on the knee can leave a bloke out of action and there’s very little you can do about it. I know our injury record is one which leaves many people rolling their eyes, and rightly so in the not too distant past, but things have improved on that front generally and injuries are a fact of football life for every single club.

Meanwhile, Alex Iwobi officially signed his new contract, and as I wrote last week, I think this is decent move for all concerned. I’m open to giving almost every player a fresh start under Unai Emery, and at 22 and having worked his way through the academy he joined at 9 years of age, he should tick all the boxes required for him to be considered a ‘real Arsenal man’. It’s something fans ought to be invested in as much as we were for others who have trodden that same path.

I think there’s talent and potential there which blossomed for a while under Arsene Wenger, but he’s plateaued a bit since. It’s an issue that we’ve seen before with young players, but like injuries it’s not one unique to us. It’s a challenge many footballers have to overcome, not all of them do it and their careers don’t reach the heights we’d hope. I’m curious to see how he gets on under a coach who will demand a lot from him, and perhaps the faith shown in him will help him kick on this season. Fingers crossed on that front.

In outward transfer news, Everton have signed promising young keeper Joao Virginia, and he was someone expected to play quite regularly at youth level this season. Our resident youth correspondent Jeorge Bird calls it a ‘big blow’ to lose him, but perhaps his departure will open the door for someone else to step up at that grade.

Our goalkeeping situation in general remains fluid, shall we say, with plenty still to be decided by the new boss ahead of our opening game of the season. I imagine Bernd Leno will get the 90 minutes in Stockholm tonight after Cech played the full game in Dublin. After that, it’s decision time and we’ll find out more when the team is announced in just over a week’s time. Unless we get a midweek telegram of course:

If you’d like some extra reading this morning, why not check out two of the excellent columns you might have missed from this week. First up, Lewis Ambrose takes a tactical look at what Unai Emery has done during our warm-up games – read that here. Then there’s a fantastic tribute to a real club legend, Vic Akers, from Tim Stillman. He was far, far more than just the kitman – check it out here.

And if you prefer listening to reading, here’s this week’s Arsecast to get your ears around. More from me tomorrow.