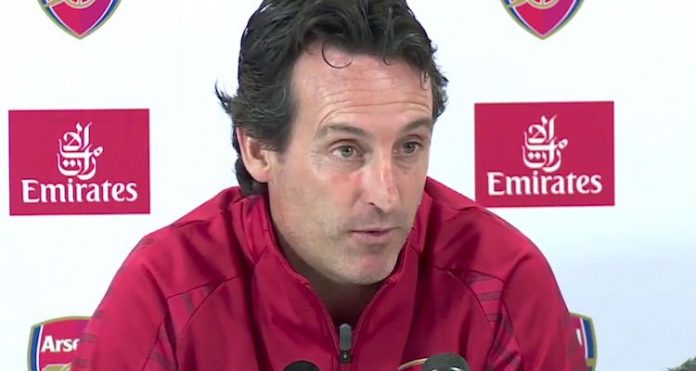 Morning all, a Saturday round-up for you as the Premier League season is now underway. Sadly, Manchester United won last night because as much as we might all enjoy them losing as a matter of course, anything that might add to Mourinho on the brink of a meltdown would have been even more welcome. We can only hope that the sight of Luke Shaw scoring disgusted him so much that he had an uneasy night’s sleep and woke up this morning feeling tired and crotchety.

Unai Emery held his first pre-game press conference yesterday and in a change from the way things were under Arsene Wenger, not only did we not get live coverage of it on the official website, it took place at 1pm with a one hour embargo. I suspect the new boss’s still somewhat rudimentary English is a factor here. He doesn’t yet possess the language skills he might need to deal properly with difficult questions, or he might say something which is taken up the wrong way and instantly disseminated, but it was a reminder that Wenger was an absolute press conference master.

He rarely, if ever, put a foot wrong, or his foot in his mouth, and the Arsenal press team could be sure he’d play a straight bat to the attempts to catch him out or get him drawn into something he didn’t need to be. Hopefully as Emery’s English improves this is something they reassess because it was a nice thing to be able to see the manager talk to the press in real time. There is a full recording of it available after a couple of hours, but it’s not quite the same thing.

In terms of what he had to say, there was an injury update and it seems as if Aaron Ramsey is going to be fit to play, but Nacho Monreal is not, meaning that Ainsely Maitland-Niles will be the man to deputise at left-back. We’ll go into the potential team when we preview the match tomorrow, but there was no suggestion that the likes of Granit Xhaka and Lucas Torreira would not be available, and with City set to go into this one with all their World Cup stars in the squad, we’d be making an already difficult job harder if we were to leave ours out.

He reiterated his desire to keep Ramsey, but made it clear once again that the responsibility for making that happen did not lie with him, and said that David Ospina, Joel Campbell and Carl Jenkinson were the three senior players who could still the leave the club. The first two seem to have more chance with windows across Europe open until the end of August, but I can’t imagine Jenkinson attracting too much interest beyond England, so the best he can hope for is a loan move to the Championship before August 31st.

He spoke about Sunday and the need to find a performance that would connect and consolidate the relationship with the fans as we begin a new campaign:

We are working to improve each match and each training session. But Sunday, we need to show on the pitch our performance at a big level. The position is demanding our best moments tactically and also individually. It’s for that, that on Sunday I want first to be together with our supporters. It helps, if we’re together, for the players to show their best performance and to transmit with every supporter the quality, the energy and the spirit to go forward against Manchester City.

And then there was the long-awaited issue of the captaincy. In news that is not at all surprising to me, Laurent Koscielny has been named club captain. His seniority and the fact he’s one of the longest-serving players at the club, as well as the fact he’s been the vice-captain and our de facto on-pitch captain for most of last season, makes this a fairly obvious choice despite the fact he’s sidelined until December or thereabouts.

Some will say that this actually qualifies him perfectly given the non-playing nature of our captaincy in the last while as both Mikel Arteta and Per Mertesacker spent significant periods of their tenure not playing. I don’t really have any issue with this though, there are duties and responsibilities the club captain carries out and Koscielny will still be capable of those, while Emery is looking at another group of available players to be his leaders when the team plays, saying:

I told the players, it is Petr Cech, Aaron Ramsey, Mesut Ozil and Granit Xhaka. In my career I have always wanted leaders in the team, representation for all the players.

I also think they are in the team more. Leaders who will show this capacity during the season. So these five players are in this possibility to be the captains.

I know people hark back to the days of an inspirational on-pitch captain like Tony Adams, but as I’ve said many times before, these guys don’t grow on trees – otherwise every team would have one. They are very rare, and in the absence of that kind of character I think the idea of creating a cohort of captains who take responsibility is not a bad one.

The bottom line is this: will the appointment of Koscielny as captain have any kind of negative effect on the team? Of course not. If we don’t finish as high as we’d like this season, it won’t be because he’s doing the captains notes for the programme or anything else. It might be because we’ll miss his quality as a player due to his injury – his absence feels particularly testing when you look at our central defensive options – but this is not going to be the difference between success and failure this season. There are myriad other factors beyond who wears an armband, and Unai Emery is the one who will be in charge of most of them.

There are also some reports this morning that Petr Cech will be his captain and in goal on Sunday against City, but again that’s something we can discuss in tomorrow’s blog which will preview the Man City game in full.

So that’s about that for this morning, but in case you need some more Arsenal stuff to get you through the day, here’s what we put out yesterday if you haven’t had a chance to listen/read yet.

– The Arseblog Season Preview Post – with input from myself, James, Andrew Allen and Tim Stillman.

And if you’re an Arseblog Member on Patreon, you also get:

– My Arse – Episode 7 in which James chats to journalist and author Jonathan Freedland about his life, work and being an Arsenal fan.

– Get With The Programme – a brilliant long-read from Tim Stillman about the history, development and continued production of the Arsenal Programme.

If you’re not a Patreon subscriber, it costs just €5 per month and you can sign up here. There’s a load of extra reading and listening in the archives there if you do, and of course it all helps support what we do on the site throughout the season.

Right, that’s it. Have a good Saturday, back tomorrow for the first game of the new campaign – which is an exciting thing to write after an entire summer!