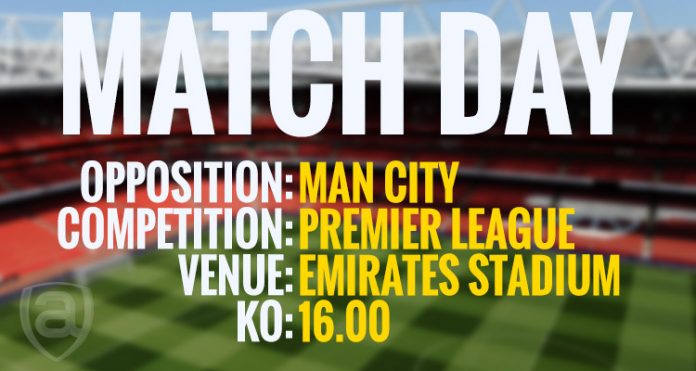 So, we’ve had all the talk, all the summer, all the pre-season preparation, all the hard work and the letting people know about the hard work, the tactical adjustments, the change in playing style, the different demands from a new head coach, new personnel on and off the pitch, and the time has come to put it into action.

It would be fair to say that our start to the season could have been a bit more sedate. Opening up against the champions is always tough, and when they’re a team as good as Man City that makes it even more difficult, but we’ve got to play them some time and perhaps today is as good as any other day.

Personally, I’d have preferred to face them a bit further down the road when Unai Emery has had more time to work with his team, to know his players even better, to have tweaked a few things here and there, but there’s nothing we can do about it, and the Spaniard knows his opposite number well from their time in La Liga together – and let’s face it, everyone knows what City are about and how Guardiola likes to play.

In terms of today’s team, we’re a little in the dark about what exactly he’s going to do, but if I had to guess I’d go with: Cech, Bellerin, Mustafi, Sokratis, Maitland-Niles, Torreira, Xhaka, Ramsey, Mkhitaryan, Ozil, Aubameyang.

That’s a back four that on paper looks a bit suspect, but perhaps its one which will be offered a bit more protection than we’ve seen in the past, both from an organisational point of view and the fact that this summer we’ve signed a defensively minded midfielder. The Uruguayan isn’t the biggest, but players like N’Golo Kante have shown us that you don’t need to be 6’4 to be a DM, the role has been redefined somewhat and hopefully the former Sampdoria man can hit the ground running.

There’s a lot to like ahead of them too, a combination of experienced creativity and vision along with an actual world class striker is tantalising to say the least. The idea of Ozil firing laser-guided passes to Aubameyang is delicious, and if the two former Borussia Dortmund men can click like they have in the past then they’re going to cause any defence problems. To then have the likes of Alexandre Lacazette, Danny Welbeck and Alex Iwobi on the bench gives us some nice depth too.

Where I have some concern though is our back four. I don’t think four or five weeks of pre-season training is anywhere near enough for Emery to assess the players properly or put right the issues that have plagued us for so long. Although the defence is reportedly something he’s been highly focused on, he’s going to need time to get it right and along the way there are going to be games that will prove valuable learning exercises. Obviously I hope today isn’t one of them but I do think we need to realistic about how quickly he can effect change in this area.

The reports that Petr Cech is set to start over Bernd Leno are also interesting. I hear and understand all the people who talk about his experience and so on, but this summer the club went out and spent a whopping amount of money on a new goalkeeper. If Bernd Leno were 20 year old with only a season or two under his belt, the decision to go with Cech would be much more understandable, but this is a 26 year old with over 300 games to his name and who has played for Germany, so that just raises a little doubt in my mind.

Leno was a Sven Mislintat signing, not an Unai Emery one and the Spaniard would have had no input into it. The season is long, and there’s plenty of time for Leno to convince the boss that he’s the man for the job, but as of now the decision as to who our number 1 is has been made, and it’s Petr Cech.

Anyway, it’s all very exciting, it’s a new era and that was illustrated perfectly by the fact our new manager Tweeted about the season ahead last night:

Looking forward to meeting you and, above all, showing on the pitch we are @Arsenal COYG! pic.twitter.com/pq4wxpYGQ6

I do wonder how long that Twitter account will last, simply because what feels lovely and fresh to us now will be soiled and made rotten by some of the nastiest elements on that platform sooner or later, but it does show us have things have changed.

I go back to what I said earlier, I believe Emery needs time and patience to get his players to understand what he wants from them. It can take a team a while to get used to doing things at exactly the right time, the automatisms that Per Mertesacker spoke about some years ago, and along the way there will be teething problems. But what Emery has promised is a team that will work hard, that won’t just go through the motions, and when fans see that side of things I think there’ll be more understanding when some results don’t go as well as we want.

I really have no idea how today is going to go. My gut tells me City will be too strong for us. They’re now into their third season under Pep and know exactly what to do in every aspect of their game. We’re not even into our third month under Unai Emery. However, it’s the first day of the season, and my gut can take a running jump because my heart is all about a big Arsenal performance today and an opening day win. If you can’t be wildly optimistic on the opening day, then you might as well pack it in.

As ever, we’ll have a live blog for you later on, so feel free to join us for that, and we’ll have a match report, player ratings, stats and reaction over on Arseblog News following the game.

Welcome to a new season folks!