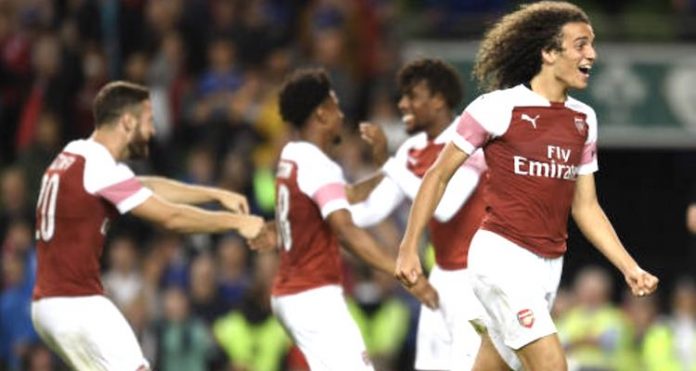 Morning all, no doubt everyone is still basking in the glorious penalty shoot-out win over Chelsea in Dublin last night. It was quite a fun night in the end, despite the game being a bit flat in general until the last 20 minutes or so when we had a couple of good chances before that late Alexandre Lacazette equaliser forced the penalties. Report and video clips here.

Some thoughts on some things from my vantage point in the stadium.

New coach, some of the same habits

Although Unai Emery is in charge now, there was a very familiar feel to the way we played, often going backwards and sideways due to a lack of movement ahead of the ball. This is probably not an issue unique to Arsene Wenger’s sides, but you can see in some of the players the natural inclination is towards safety. It does make sense but there were times when a bit more incisiveness, perhaps taking a risk here and there, could have driven us forward.

Matteo Guendouzi is an interesting prospect, but …

He certainly seems capable of finding passes between the lines, and he did try and open things up a bit which I liked. The repeated cross-field passes don’t interest me that much, any professional worth tuppence should be able to float a ball under no pressure to a teammate on the wings, but what caught my eye a couple of times were passes in tight areas which found an Arsenal man higher up the pitch, and his desire to move the ball quickly. It showed good vision and the ability to move the ball with pace and precision was good to see.

All the same, he’s far from flawless, and I suspect in a more competitive environment his tendency to turn on the ball – and it’s pretty easy to telegraph which way he’s going to go – will prove costly, especially as he’s not always going to get the free kick he wants. That’s something that needs work, fast, if he’s going to play Premier League football.

I’m more inclined to start the latter over the former, but we were better up top when the Frenchman came on. He missed a glorious opportunity to equalise, and it was his stinging effort which led to the corner that brought about the goal. Whether you consider it an either/or option or not, the fact is we have two very good strikers at our disposal and how Emery chooses to deploy them remains one of the most interesting aspects of his job.

Maybe it was just last night (again the sample size we’re working off is small), but he was asked to play higher up the pitch than he normally does, sweeping up on a couple of occasions as Chelsea looked to break behind our high line. Also, when we’re defending corners – not something we did particularly well (esp for their goal), we no longer have men on the post. I assume this is an Emery edict, rather than something Cech has decided on, so I’m curious to see whether or not this is something he persists with.

He also saved two penalties which is a thing considering how long he struggled with them last season and the season before. I remain firmly of the opinion though that we ought to stop giving them away first.

I’m not convinced that Mustafi and Sokratis are the right defenders with which to play a relatively high line. I suspect this might well be Emery’s first choice central defensive duo at this point, and while I’m perfectly prepared to give them time to build a relationship and a partnership, right now they don’t fill me with a great deal of confidence.

To be fair, the Chelsea left winger was blindingly quick, but it’s hard not to look at Hector and wonder where his pace has gone. He doesn’t look as fast as he used to be and at times he struggled last night, giving away a penalty too. What I would say in mitigation is that he seemed to signal to the bench a couple of times that he had a back problem, and much like in the Wenger era, he’s being asked to do enormous amounts of work on that right hand side without much help.

Defensively he got barely any cover at all and there appeared to be nobody doing anything about it during the game. All it took was for that Chelsea lad to drive towards our box and all of a sudden Bellerin, and the rest of our back line, looked vulnerable. There was some last minute stuff in the box which prevented danger, but it shouldn’t be that easy to run at us in the first place, and we need to sort that out because it looked an area of real weakness.

His pass helped set-up the late equaliser, and there were a couple of touches and turns which stood out because they were a cut above anyone else on the pitch. At times his shoulders sagged, but at this point we need to look beyond that as being anything out of the ordinary, that’s just his body language. Emery gave him the full 90 to get those minutes under his belt, he knows he needs the German at his best to give his team a competitive edge, so let’s hope it stands him in good stead next weekend.

According to my neighbour in the stands, Ramsey did the warm up but was then replaced by Emile Smith Rowe because of a “minor calf problem”. Of course that had people talking about how he’s about to be sold, but the reality is it’s most likely an injury, because as much as I like him, these kind of muscular problems have been a significant part of his career. Often early in the season too.

After the game Emery expanded on both the injury and contract situation (not that there’s much new there), but it feels like we’re reaching a kind of boiling point with this one. I think we missed his quality in midfield last night, Elneny and Guendouzi are a bit too samey for me, but it’s worth bearing in mind we have Granit Xhaka and Lucas Torreira to come in and add something different to this area of the pitch.

In general however, this remains a complication at a time when we could do as much clarity as possible.

It was interesting to see things in the flesh, how Emery works on the sidelines with lots of thumbs up, lots of instruction, and where we are as a group under him right now. I know many fancy our chances against City on the opening day because they’ll potentially have lots of players missing because of World Cup duty, but I think we have plenty still to work on. Not just for that game, but for the season ahead, and the Spaniard is going to have to address some key issues pretty quickly, especially defensively.

Still, it was great to see some folks from London at the game yesterday, and good to catch up some old mates, have a few beers and watch the Arsenal in my home town. More from me tomorrow and there’ll probably be an Arsecast assuming I can get my stuff together there.