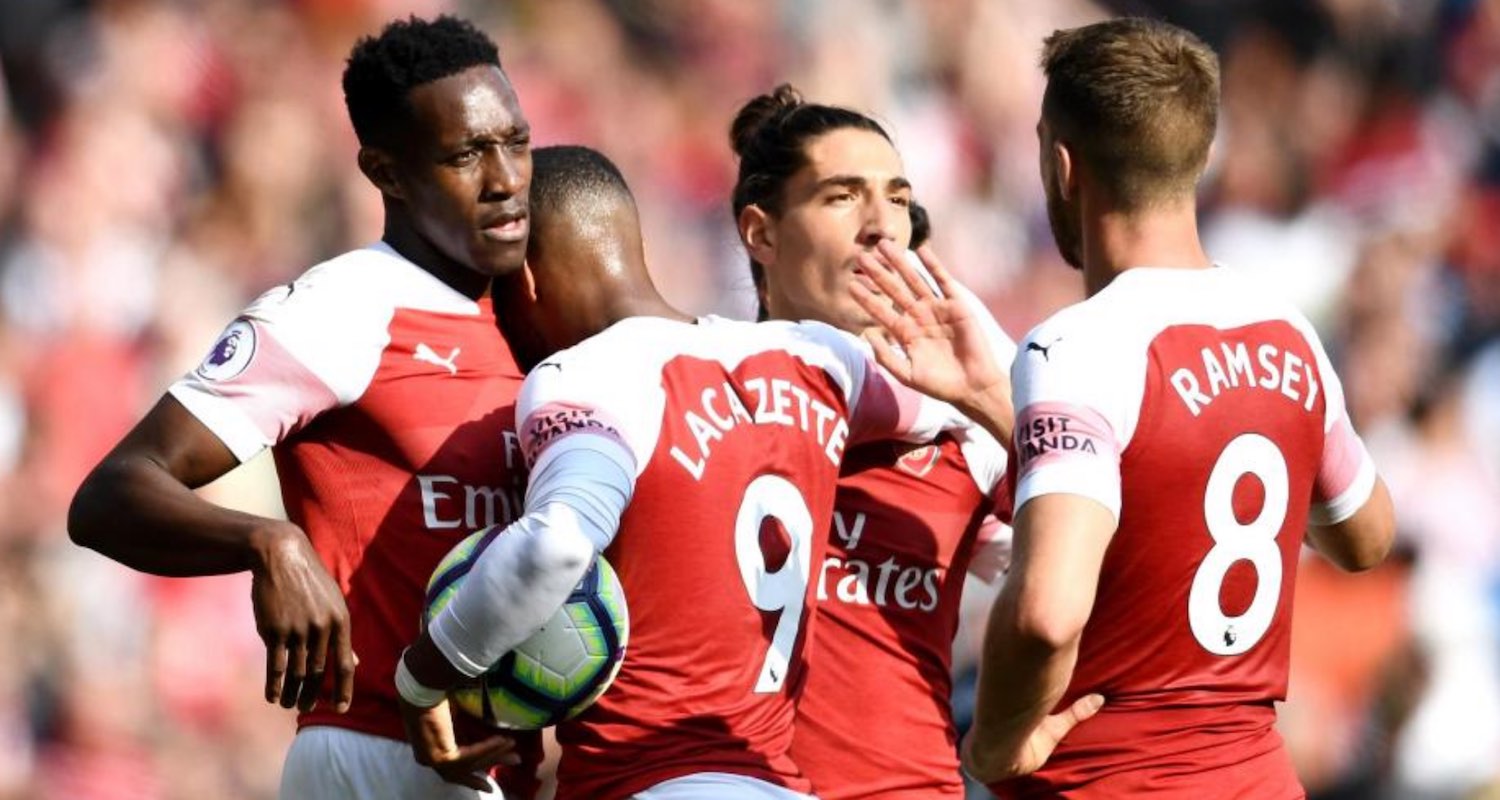 It wasn’t perfect by any means, but we got our first win of the season under our belts as goals from Nacho Monreal and Danny Welbeck, and an own goal, gave us a 3-1 victory over West Ham yesterday.

It’s clear that Unai Emery still has plenty to work on, not least the ease with which the opposition can find space behind our back four. I know people have various issues with the individual players, but this seems much more a collective issue – and not just one for the back four either.

West Ham had plenty of joy in this regard yesterday, runners from midfield finding little resistance and lots of green grass to to run into, and although we had plenty of the ball we were finding it hard to create. They had the best chance of the early part of the game, Arnautovic shooting into the side-netting when a square ball for Antonio would have given him a tap-in.

We had the ball in the net but it was ruled out for offside, and when Iwobi lost the ball high up the pitch, we got an illustration of how simple it is to create danger against us. They worked the ball to their left, drove towards our box, our centre-halves were at sixes and sevens, and Arnautovic drilled home a shot to make it 0-1.

It was all very, very familiar. For all the change, and talk of change, there’s a lot of work to do with these players to make the team more defensively secure and aware to danger – which I think is a big part of it. Attacking with the full backs naturally leaves them out of position, so it’s important that midfield provides cover, not something they did properly until the introduction of Lucas Torreira in the second half. Also, there are times when the central defenders need to fight their natural instinct to win the ball high up the pitch because it leaves holes which teams at this level will exploit.

However, we got a quick response and it’s no surprise that it came from the right hand side. It’s noticeable how we’re using Hector Bellerin to overlap and get dangerous low crosses in, and it was from one of those that the ball fizzed into the West Ham box, Fabianski got a slight touch which saw it skid of Iwobi’s arse and into the path of Nacho Monreal who took a touch and fired home to equalise.

I can understand frustration with Bellerin from a defensive point of view – although with the caveat that he’s clearly being asked to get forward as much as possible and it is tough work getting up and down – but so much of what we’ve created in the last two games has come through him. He ended up yesterday with two assists, setting up Danny Welbeck for the late goal that sealed the win, and while Lichtsteiner might have made us a bit more solid defensively, I’m not sure he’d have contributed as much to our attacking game – and what Bellerin gave us yesterday was fundamental to the win.

It was a scrappy game, we didn’t control it at all in the second half until after the own goal, and there were chances for the Hammers. Just before half-time Guendouzi switched off to let Snodgrass run past him and but for a hugely important save by Petr Cech we’d have been behind at the break. They also had a fantastic chance for Arnautovic, but someone somewhere was smiling on us because not only did his miskick it, he injured himself in the process and eventually had to go off.

The introduction of Alexandre Lacazette definitely had an impact from an attacking sense, and I do think Torreira gave us a midfield that was better balanced. This is an issue that Emery has to get on top of quickly, because it’s such an important area of the pitch and I’m not quite sure he knows his best combination in there yet. It’s only three games, I know, but he’s nailed his colours to the mast in terms of his centre-halves, his keeper, and midfield needs some consistency of selection too.

Lacazette was involved in the goal that put us ahead, hooking it back across goal towards the ineffective Aubameyang but it hit the defender and went in. Not especially pretty but you’d take it. After that I think we found a bit of a spark, Fabianski made good saves from Ramsey and Mustafi, the Welshman did well to create a very presentable chance for Auba but it was blocked on the way through – and perhaps there’s something to the confidence issue the boss spoke about this week.

Welbeck’s late goal put the icing on the cake, and while the scoreline doesn’t really tell the story of the way the game went, I’d much rather be sitting here this morning talking about things we have to work on with three points on the board. We are, as we keep saying, a work in progress, and every game is part of that, so it’s much better to do that work with the confidence boost of a victory than the alternative.

He referenced ‘balance’ between attack and defence a number of times in his post-match comments, and this is where I think it’ll take him some time to get things right. He suggested the second half was better in that regard, and when we brought on Torreira his natural instinct is to shield and cover space left behind. Nevertheless, it’s something he’s going to have work on in a big way, but at least he can carry out that work this week with the pressure off a little bit, we’ve won our first game under his management, and hopefully in the weeks ahead we can improve.

Aside from the game, there was the story doing the rounds during the match that Mesut Ozil had had a bust-up with Emery and refused to be on the bench, something vehemently denied by the Spaniard afterwards. He said:

Of course the more cynical among you will say, ‘Well, he would say that, wouldn’t he?’, but I’d like to take him at face value this morning. The whole Ozil situation is a bit of a thing now though. This isn’t the first game he’s missed through illness, and under Arsene Wenger there’s no doubt that some of the times he was ‘sick’, usually when we had to venture north for an away game. Apparently this is his seventh reported illness since January of last year.

Maybe he’s just a very sickly man. Maybe there’s something else going on. Maybe, after the summer he had and everything that’s gone on after his statement – when he was subsequently hung out to dry by his German teammates and every Bayern Munich related mouthpiece around, there are things he’s dealing with that go beyond physical injury. The reaction to that statement was visceral and ugly in some quarters, it can take a toll and no pay-packet makes human beings immune from the kind of illnesses that everyone else has to deal with.

Boringly, he might just have had a bad cold. I understand completely that we haven’t had value for money from Ozil since he signed that deal last January. If someone can prove to me he just wants to pick up his wages and do nothing, or that he threw his toys out of the pram over yesterday’s team selection, there’s no way to defend that and no reason to defend it. Yet just this week Emery spoke about how the ‘Arsenal family‘ were there to help Ozil through what appears to be a difficult time for him, so it’s worth considering there’s more to the situation than is being made public.

Anyway, perhaps something we can tease out more in the Arsecast Extra tomorrow, in the meantime have a great Sunday.