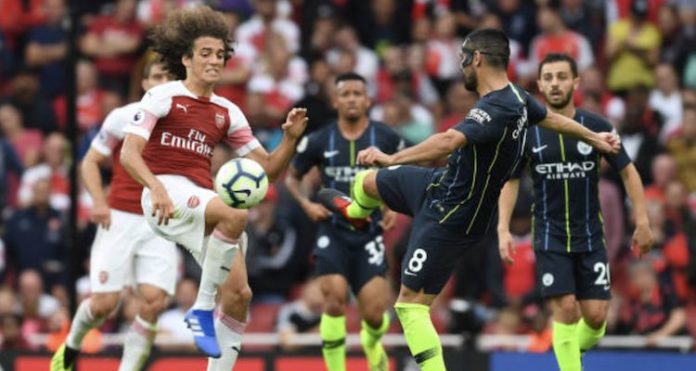 It was clear from pre-season that Unai Emery was going to need some time to get his team playing the way he wants, and it was also fairly clear that facing a team as good and as well-oiled as Man City at this nascent stage of our development under the Spaniard was going to be a real challenge. Yesterday was evidence of that, yet there were some positives to take from day despite the defeat.

Playing out from the back is a clear part of what Emery wants to do, and in picking Petr Cech he’s asking a veteran keeper to do something he hasn’t really had to do in a long time. He didn’t always look comfortable with the ball at his feet, one heart-rending moment in particular when he almost scored an own goal, but this is what the new boss wants.

It’s something we’re going to have to get used to as fans too, the ironic cheers when Cech waved his teammates forward for a goal kick at one point were telling, but this is new and the only way we’re going to get better at it is to keep doing it. I clearly remember Man City fans growing frustrated with their players not lumping it forward under pressure at the back in the early part of Pep’s reign, and I guess this is something similar.

In yesterday’s preview blog I touched on the decision to go with Cech ahead of new signing Bernd Leno, and it was made with pre-season in mind but also all the behind the scenes training and info we don’t have access to. From what I saw of the German he seems more suited to playing out from the back than Cech, so it adds another little bit of worry for me that he’s considered second choice right now. That said, the number 1 made some big, big saves yesterday.

The other team selection surprise was that of Matteo Guendouzi in midfield, selected ahead of new signing Lucas Torreira and the vastly more experienced Mohamed Elneny. First off, there was a lot to like about how he played. He’s whole-hearted, willing, energetic and not once did he hide or let his head go down when things went wrong. Those are positive traits which will hopefully stand him in good stead as he makes progress in his career. At the same time though, I thought his inexperience at this level was really evident at times – and before people start getting the pitchforks out, this isn’t a criticism, it’s just an observation.

I’m not being harsh when I say this, but he’s a 19 year old making the step up from Ligue 2 playing against one of the best Premier League teams of all time. Why wouldn’t he look a little out of his depth at times? That’s not on him, it’s just a fact of his footballing life, and he was poor for the goal and made a big error which should have seen City score their second goal (I think it actually came 30 seconds after that, so it was an indirect consequence).

Nevertheless, despite those moments, he was our best midfielder on the day, not helped with some of the performances around him and the difficult positions he was put into with some iffy deliveries to him – it was no surprise he struggled to cope at times. I thought it was interesting that midway through the first half he came to the touchline seeking instruction or clarification from Emery, and after that he seemed to grow into the game.

As for the players who left him somewhat in the lurch, Granit Xhaka looked rusty and off the pace (perhaps because of his late arrival back?); Aaron Ramsey was instructed to play further forward and lead the press to minimal effect; Henrikh Mkhitaryan was a peripheral presence to say the least; and Mesut Ozil had the chances to make an impact but fluffed his lines – particularly in the second half.

However, what was pleasing about Emery’s first day was the fact that he made changes and he made them early. There are no golden boys here anymore. Ramsey’s recent calf strain may well have been a factor in the decision to replace him with Alexandre Lacazette, but the manager didn’t defer to seniority when making another midfield change and it was rightly Xhaka that got hooked for Torreira.

Defensively you can see how much work there is to do, and I felt for Ainsley Maitland-Niles who had a torrid time at left-back. This is mostly because he’s not really a defender and lacks the experience required to cope against a team this good. When Lichtsteiner replaced him in the first half due to an injury, we were immediately more solid out there, but I remember hearing Sokratis talk about he’d help the young defenders at the club and there was nothing from him to help Maitland-Niles as he got roasted time and again in dangerous areas.

I thought the Greek had a so-so debut, he was far too static for me on the second goal in particular, and it was Lichtsteiner who switched off to allow Bernardo the shot in our area – evidence that City’s guile and movement won’t just hurt those without the experience to know how to deal with it. The boss has got plenty of work to do with these players at the back.

Up front we never really clicked consistently but looked better when Lacazette came on. The French international probably should have done better with a chance he put wide on the half-volley, and there were a couple of moments late on when Ozil really ought to have made more of – the poor touch after a dreadful error from the City keeper was so unlike him and had he scored there the last few minutes would have been quite interesting.

Still, I’m sure it will have been a useful exercise for Emery. Clearly the litmus test for this team is not how we compare to Man City because we all understand how big a gulf there is in quality, both in terms of personnel and how natural their style of play is in comparison to ours. We are, as I said yesterday, a work in progress and we’re in the very, very early stages of that. There are obviously things we can work on in training but playing games will be how we really develop under Emery, and as a stickler for detail he’ll take plenty from yesterday to work on with his players.

We’re starting and we need also to do one process one way. Today is the first step. Manchester City are working in their third year with Guardiola and they have built a team with security, good players and a great stability of playing like they want. We are only starting out now.

I am happy with the players because they ran and they fought. We need to continue working tactically and defensively, and doing more to shorten the differences today between Manchester City and us.

So, as disappointing as it always is to lose, it’s a not unexpected outcome against a strong team that we haven’t beaten in the league since December 2015. Each game will enable the manager to know his players better and for the players to get more comfortable with what the manager wants them to do. Again, it’s a bit of a shame that our next game is such a difficult one too – away at Stamford Bridge – but they too have a new man in charge so maybe that will even things up a bit.

Yesterday will have given Unai Emery plenty to consider. He’s illustrated he’s willing to be brave with his team selections, that nobody’s place in the team is taken for granted, and I’m sure he’ll up the ante when it comes to his preparation for this weekend. There’s no shame in losing to Man City, especially in this context, so now it’s about how we react and what we can do this week on the training ground to get us in better shape for Chelsea.

James and I will be recording the Arsecast Extra this morning, so if you have any questions or topics for discussion, please send them to @gunnerblog and @arseblog on Twitter with the hashtag #arsecastextra.

We’ll have that up for you before lunchtime, and all the days stories will be over on Arseblog News with our fancy new URL.

Can Arteta get more from Pepe and Guendouzi after the Winterlull?